How Can A New College Football Coach Avoid Getting Fired? 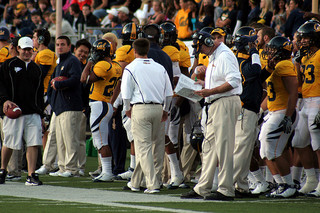 More than 25 college football teams have decided to change head coaches in the past few weeks.  As the new coaches get hired and settled into their new jobs, one suspects that all of them believe that they will be the person who will change the fortunes of their new schools.

Unfortunately – as published research seems to indicate – it doesn’t seem likely that many of these coaches will really make a difference. Aside from that ambition, these coaches are definitely hoping to stay in their current position until they decide to voluntarily leave for an even better paying job.  In other words, these coaches hope to avoid getting fired.

Fortunately for these coaches, published research in sports economics doesn’t just convey the depressing news that coaches are probably not much different from each other (i.e. once again, new coaches don’t seem to make much of a difference). Research – from Paul Holmes and the Journal of Sports Economics– also indicates why coaches get fired.

Let’s begin with a somewhat disturbing statistic for these new coaches.  As Holmes notes, “… a third of all dismissals… take place in the first 4 years of a coach’s tenure.”

Why is this disturbing?  Because college football isn’t like the NFL. NFL teams can trade for players and sign free agents. For the most part, though, college football teams can only acquire talent from the ranks of high school players.  And since new coaches are at a disadvantage in the current recruiting season, these new coaches are really not going to start bringing in their own players until next year.

But for the coaches in Holmes’ data set that get fired, many don’t get to see their first recruits graduate.  This means that many coaches are getting fired with players their predecessor – who the school often thought was a failure – recruited.  That hardly seems fair.

Of course, this fate can be avoided if the team wins with the new coach.  Holmes’ research indicates that winning – as one would suspect – will allow a coach to stay.

All wins, though, are not created equal.  For example, an increase in…

will all reduce the probability of a coach getting fired. But of these, conference winning percentage appears to be the most important.  As Holmes notes, “an additional (conference) win this season could offset three losses last season.”

So conference wins are clearly important.  And a win today offset many losses from yesterday.  That means the timing of wins matters (more on that in a moment).

But what about victories against rivals, winning bowl games, or making sure your team faces a relatively strong competition? One might think that all three of these factors would help a coach keep his job. Perhaps surprisingly, though, Holmes found that – of these three factors — only winning games against rival schools mattered.

And that means coaches have an incentive to schedule “cream puffs.” Strength of schedule has no impact on the probability of a coach being fired.  And winning definitely helps.  So coaches shouldn’t try and seek out the best competition for their team.  In addition – and this is important at this time of year – winning bowl games also doesn’t appear to matter.   Again, it helps to win enough to get to the bowl game. But victories in the latter part of December or January don’t really help a coach keep his job.

Of course, a coach definitely has to win.  And if you are taking over for someone who got fired, chances are you are inheriting a poor team that isn’t like to win.

So how much time does the new coach have to turn it around?  It appears a coach has a few years, although how many depends on issues such as the race of the coach, is the coach an alumni, can the coach follow NCAA rules, etc.

In addition – and this is a key contribution from this research – it also appears to depend on how a team has performed in the past.  Holmes considers a team’s winning percentage from three years ago to ten years ago. He also considers performance from 11 years ago to 30 years ago.  Both of these historical performance measures indicate that the better a coaches’ school performed in the past – whether or not the coach was at the school or not – the more likely the coach will get fired today (holding all else constant).  In other words, coaches are evaluated relative to the historical record of the school.

Putting this all together, what should a coach do to keep his job?  From Holmes’ research it appears a coach should:

This latter observation is derived from the finding that wins today – especially conference wins – are worth more than wins in the past.  Given that a new coach does have a brief grace period, it is better to lose at first and get better than win at first – encourage high expectations – and then fail to meet these expectations.

What does that all mean for new coaches? Although you may be excited to be in your new job, just take it easy at first.   In other words, don’t worry so much about winning next year.

And in a few years, see if you can get some of those “cream puffs” on your schedule.