We Once Had Self-Driving Cars 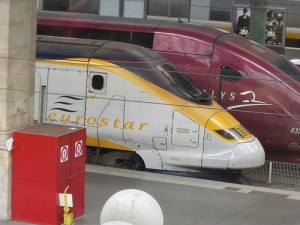 A frequent response to the dysfunctions of American air travel is technological: namely, self-driving cars (also see this article). In a self-driving car, you can relax, even sleep, while being driven safely to your destination at 60 mph. We once had such a system. It’s called a train network.

The first is by plane, from Boston to New York City:

The journey is 215 miles, for an overall speed of about 50 mph. The current cheapest advance-purchase, nonrefundable round trip costs $150; that’s 35 cents per passenger-mile. For comparison, car travel is about 50 cents per passenger mile (the IRS-set reimbursement rate).

The comparison journey is by train from Paris to Lyon (I need a decent train network for comparison purposes). I made this journey when our family lived for a summer in Lyon, and I learned French by street-fighting methods. The ticket told you where to stand on the platform. Two minutes before scheduled departure, the train arrived. You stepped into the train car, found your reserved seat, and, almost before you had stowed your luggage, the train departed.

The journey is 289 miles, for an overall speed of about 100 mph. A current advance-purchase, non-refundable round trip costs 70 euros or $100; that’s 17 cents per passenger mile, or one-half of the plane’s cost. The train journey is not only cheaper and quicker, but you get more time to think and read: 2:00 on the train versus 1:10 on the plane.

Forget self-driving cars! If we can print trillions of dollars to create moral hazard by bailing out the gamblers who nose-dived the world economy, why not print money to extend and upgrade the rail network? The U.S. and U.K. rail networks were once twice as extensive as they are today.