Investing in a Warmer Future 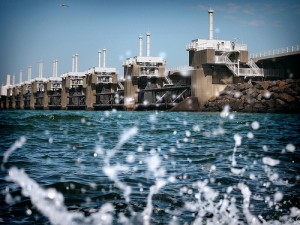 Bloomberg Businessweek explores how firms are adapting to a future climate:

Now some investors are taking another approach. Working under the assumption that climate change is inevitable, they’re investing in businesses that will profit as the planet gets hotter. (The World Bank says the earth could warm by 4C by the end of the century.) Their strategies include buying water treatment companies, brokering deals for Australian farmland, and backing a startup that has engineered a mosquito to fight dengue, a disease that’s spreading as the mercury climbs.

Piet Dircke of the Dutch engineering and flood-prevention firm Arcadis says he was besieged with calls after Hurricane Sandy: “The climate is changing. Sea level is rising. That’s quite obvious. At the same time, the cities that are close to the waterline continue to grow and have more money and need for protection. It’s almost a natural growth market.”

But take heart, without even a trace of man's input, the next solar cycle (#25) will be the quietest of the last several centuries, and the last time that happened it was called the Maunder Minimum, also called the "Little Ice Age".

Sea level has been rising steadily before the human CO2 issue. The human contribution has been at most 2 inches. The exaggeration of this issue is amazing.

Sea levels will continue to rise rapidly as rising temperatures result in more thermal expansion. The trivialization of this issue is an abject failure of long term economic consideration. As if sea level rise was the only concern, ignoring higher rates of storms, droughts, heat waves, malaria outbreaks, and ocean acidification. But other than that, sure, I guess all these investors are wrong.

This would be a good way to address climate change if the incentives worked out a bit differently. You could tell people that believe in climate change to put their money where their mouth is and invest like those in the article. In the meantime, those who believe it is phony and hyped up could be against climate change.

The only problem is we don't want those who believe in climate change to have incentives to make things worse...