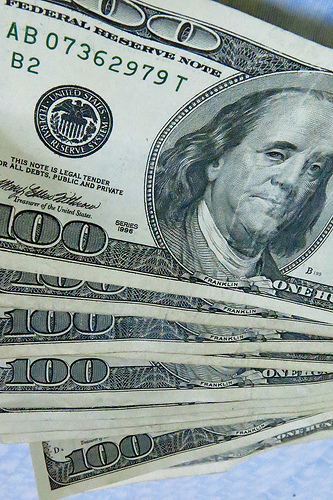 Planet Money reports on the surprising destination of most U.S. $100 bills:

In fact, as of 2011, roughly two-thirds of all $100 bills were held outside the U.S., according to an estimate by Ruth Judson, an economist at the Fed.

The article explains why the high demand for U.S. currency is a good thing:

As Bruce Bartlett recently pointed out, when foreigners hold U.S. dollars, they are effectively giving the U.S. government an interest-free loan.

More broadly, foreign demand for U.S. currency (and U.S. Treasury bonds) in times of crisis is a sign that people in the rest of the world still see the U.S as the home of one of the safest, most stable economies on the planet.

My initial thoughts on why the bills were outside of the country had little to do with the stability of the currency and immediately jumped to drugs and other illicit substances. They're not typically produced domestically, have to be paid for in cash, and are expensive, requiring large bills for payment. I wonder how much these reasons are contributing to their stockpiling outside of the country.

Brendan, that may explain a notable percentage. I would say a larger percentage would be tourist dollars that just never find their way back. Many vendors overseas are happy to take US currency.

In the US, $100 bills aren't very useful. Businesses usually don't take them, and most people don't pay for expensive things in cash. Outside the US, it's a great way to carry a lot of value in a single bill. It's also trusted by nearly everybody everywhere. Its use as proxy value is almost more valuable than its use as actual currency.

Don't know what businesses you patronize, but hereabouts $100 bills are quite normal. For instance, it's not at unusual to see people paying with $100 bills at my grocery store (which doesn't accept credit cards).

I'd also note that when I worked in Switzerland, my bank there would happily give me US $100 bills, or large-denomination Euro notes, as well as Swiss francs. It's a lot easier to bring a wallet full of $100 bills back to the US than to deal with transfers between US and Swiss bank accounts.

The second part of your comment plays into the theme of the original post. Outside the US, $100's are more useful. I doubt that your Swiss bank had many people coming up and requesting $4.87 in US currency. Most people who want to do exchanges at the bank are changing enough money that it makes sense to have a lot of their US currency in $100's.

I would imagine that a very large share of these 100 dollar bills came from the wheelbarrels full of bricks of 100 dollar bills that the DoD uses to pay contractors over in Iraq and Afghanistan.

This is nothing new; I recall statistics about total US currency held outside the US in the 70-80% range 20+ years ago. Of course, counterfeit US currency is also held (and manufactured) predominantly outside the US.

Won't those foreigners be surprised when they discover that their $100 bills can fall to their natural value - zero - just like any other fiat currency.

There is nothing about that post that is so offensive it needs to be hidden. The voting system that this site uses is broken. Freakonomics would be better served by blocking all the IPs that attacked Chris for simply expressing a completely on-topic economic perspective of the matter.

Foreign governments (e.g. in africa) often downgrade their currencies(okay, us does so too at the moment) , as you probably know. or the goverment fails and is being replaced. for the daily needs they use their local currencies (e.g. food, etc.) but to store value or imported luxury goods they could use us-dollar or for small industries who depend on foreign goods and need planning reliability and therefore make contracts in us-dollar as these are accepted in most parts of the world. holding us-bills is probably cheaper (and more secure) than to open an us-currency account at the local bank. anyway, the reasons already mentioned are of course valid, too.

A lot of money exchangers, especially in 3rd World countries will give you better rates on crisp new $100s than they will on smaller bills.
http://kabiza.com/kabiza-wilderness-safaris/blog/uganda-money-information-and-tips/

Zimbabwe's economy is basically run on US$.

I had heard before that if the US therefore prints more dollars, lowering the value of the dollar, it functions as a kind of tax on foreign dollar-holders. Value shifts from the holders of dollars - domestic and foreign - to the US state. Not sure if I understand that correctly however.

It's a good thing, yes. For foreigners and foreign governments, that is. For average US citizens, it means devaluing of the cash in their wallets, making the poor even poorer.