Adventures in Ideas: Sex Workers of the World, Unite! An Interview With Maxine Doogan 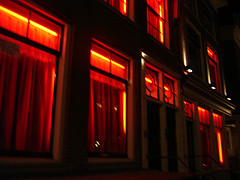 Q. Our readers might be interested in understanding exactly what you are seeking that might improve the economic conditions of sex workers? By the way, how you do you define “sex worker”?

A. To improve one’s economics is to improve their lives and the larger communities.

I use different terms interchangeably. For instance, I’ll talk about the sex workers’ rights movement being one that consists of current workers, former workers, and allies.  Or I’ll talk about prostitutes’ rights, which are specific activities which are for the most part illegal in the U.S., outside of a few counties in Nevada.

I noticed that legal sex industry workers like exotic dancers, adult film performers, web cam performers, pro doms and submissives may or may not self-identify as sex workers.

When I was out on the campaign trial for Proposition K, I met several exotic dancers who didn’t think of themselves as sex workers — even though in addition to dancing, they were providing hand jobs and the like which legally constitutes prostitution.  It was important to them to protect their legal work status and not admit that some of their activities inside the dance clubs involved sex — because sex for money is illegal — so for that reason some would not identify as sex workers. I’ve seen the same approach with some adult film performers.  Then there are those who call themselves specific names like escorts or courtesans as a means of separating their activities from prostitutes because they don’t want to be associated with something that carries so many negative social stigmas and results in so much discrimination — and obviously carries a risk of arrest.

I’ve also seen workers use one term to identify themselves in one situation and then use another term to describe their work in another, depending on who they’re talking to. So the term “sex work” has some cultural aspects as well.  Many workers in other countries use it exclusively.  Those that I know who use it do so to validate the fact that what they’re doing is work. When I’m speaking out, I generally use the prostitution term to describe myself, and not the sex worker term, because I don’t want there to be any misunderstanding about the place I am coming from. Yes, there is risk in saying that.

Q. I’ve heard advocates and lay folk cry, “Let’s legalize sex work! Lets do what Holland does!” Will their strategy work over here in your opinion? What would legalization actually achieve?

A. In my humble opinion, legalizing us like Holland wouldn’t achieve the results we all hope for because we’re not like Holland.  Prostitution in Holland wasn’t criminalized and its participants weren’t subjected to systematic discrimination and lack of equal protection for 100 years (as is our current state in the U.S.) prior to passing their legalization package in 2000.

My understanding is that Holland was in a state of decriminalization prior to being legislated.  Legalization doesn’t stop city fathers from unilaterally making decisions about where to work: for example, Amsterdam displaced a third of the window workers’ space in favor of installing art galleries and cafes.  Holland also didn’t enfranchise migrant workers and give them the ability to work legally in the sex biz, so they’re still locked. You cannot work out of your home, which results in workers being forced to pay whatever a land owner wants for the right to work in a secondary space, which may not be affordable for all workers. Recently, they’ve begun to look at their laws again because they understand that legalization wasn’t a magic pill.

Germany’s legal model allows prostitutes to join their largest public sector union, Verdi, but very few take advantage of it because that involves using your real name, which many will not do because being identified publicly exposes workers to the always present negative stigma left over from centuries of ill-treatment and criminalization. Prostitutes there have sued prospective customers for fraud — for making appointments and then not showing up — and have been awarded their fees, which is good, but workers can still get in trouble for advertising.

Here in the U.S., we tend to hear “tax and regulate it” and assume that would fix “it,” when the truth is that here in America we don’t award rights based on people’s ability to pay.  Well, at least that was the standard before Citizens United.  Many of us in the sex industries have been paying taxes for years, but we don’t have any more rights to negotiate for our own labor and safe conditions than those who haven’t paid.

The idea of paying to access rights that are inherently ours in the first place is crazy-making for me.  My position is that since our rights have been denied, violated, ignored, and neglected for the last 100 years through the criminalization of our occupation, society needs to make restitution for the cumulative damage our industry has suffered.  I’m talking about suffering discrimination in housing, employment, education, and loss of custody rights.  Also, not having access to equal protection under the law when we’ve been victims of crime and  repeatedly being re-stigmatized by media’s dominate, distorted narrative of us.

Workers in Australia have told me that they pay taxes and their occupation is legitimate, but they still suffer the stigma.  Paying taxes and becoming franchised in society are two different things.  Just look at black Americans’ struggle and the current LGBT struggle as an example.  I’d say that our class of workers should not be required to pay any local or state tax until such time when the negative stigma and discrimination local governments have caused via the enforcement of the prostitution laws against us and our communities has been eradicated.

Q. Just for a moment, let’s assume we want to treat sex work as a problem (and you can tell me you wish not to do that). But if we are talking about trying to intervene in the drug economy, an argument could be made that one needs to go after demand — the purchaser of drugs. Otherwise, we’ll never really solve the problem. What can we do to make purchasing sex work eithe
r more difficult…or perhaps more responsible?

A. Well, comparing our occupation to the drug trade is apples and oranges. I believe we’ve made selling and purchasing prostitution as difficult as it could possibly be in our society and we’re still here.

On the question of purchasing more responsibly, you first have to treat participants of prostitution like we’re adults making mature decisions in order to have an expectation of responsibility. In order for our society to reasonably hold that expectation, there would need to be a shift in attitudes to agree that sexual expression, for the mature, can take the form of negotiating and paying for sexual services; that this activity is a privately protected right and is subject to the equal protection laws, for starters. If someone poses as a prostitute and rips off a customer, that should result in a prosecution for theft. Which is not the state we’re in right now.  Most anti-prostitution laws are constructed so that you can be arrested just for being explicit about what kind of sexual activity you would like to engage in. Likewise, providers cannot say what we’re really good at to get a responsible negotiation going before we commence our relationship/liaison. So as a society we have to start with where we are and remove the criminalization of prostitution — decriminalize to enact the right to treat each other like we’re trustworthy people who are capable of acting responsibly to say what we want.

The resilience of the biz is a testament to the skills many of us have had to acquire to survive without breaking the law too much, but for some folks the learning curve to walk that fine line can be disastrous and even dangerous. Society needs to take responsibility for that, because they imposed this prohibition in the first place when they shouldn’t have.

Q. You and I have been talking about doing research together for what seems like a long time. What is the value of research for you? And what information do you want to find?

A. The occupants of our industry are isolated because of the criminalization and resulting negative stigma of association. We don’t have custody of our own narrative. People come along and make up fake facts for us that suit their agenda, and then these false and misleading narratives are repeated  over and over again in the media, taught in schools, and legislated into laws with the goal of oppressing our class and surrounding communities.

So one of the antidotes would be to get some actual ethical scientific research going to find out basic information like: How many of us are there?  How old are we?  What gender are we?  How many kids are we supporting? For those of us who have had the privilege to work with lots of people, we can make some guesses, but it’s no replacement for real research to give us some real authority to say what’s important to us. We have to find out the answers to these questions, and many others, so we can start to move away from the stereotype-du-jour that society casts us in and towards taking charge of our destinies.  If we cannot measure it, we’re certainly hard-pressed to improve anything.

The opposition has been manufacturing all kinds of data to justify their policies towards us for years, all to our detriment.  Their goal is to erase the sex industry in its entirety.  It’s easy to see in the volumes of oppressive, badly written, lack of evidence-based legislation that is being rolled out on a state-by-state basis. It’s exactly like the onslaught of legislation to restrict abortions. Between the internet and ferocious anti-prostitution/trafficking enforcement, our communities are going through big changes really fast. We need to document it, at the very least.

Q. Lastly, what is the most misunderstood aspect of the sex work economy in your opinion?

A. I believe the most misunderstood aspect of our economy is the power the worker has in collecting the money and then distributing it, because that’s how our industry works.   As direct service providers, our ability to collect and distribute that money has to be protected as a priority because it’s the primary transaction.