Three of my colleagues and friends at the University of Chicago — Kerwin Charles, Erik Hurst, and Matt Notowidigdo — recently presented some new research that aims to understand the ups and downs in the U.S. labor market.  It’s more serious and important than the usual stuff we deal with on the blog, but every once in a while we deviate from trivialities when something really good comes along.

They’ve been kind enough to put together a layperson’s version of the research below.  For those looking for the full-blown academic version, you can find that here.

A Structural Explanation for the Weak Labor Market
By  Kerwin Charles, Erik Hurst, and Matt Notowidigdo

In the aftermath of the Great Recession, the labor market has remained anemic.  Between 2007 and 2010, the employment-to-population ratio of men between the ages of 21 and 55 with less than a four-year degree fell from 82.8 percent to 73.8 percent.  As of mid-2012, the employment-to-population ratio for these men remained depressed at 75.6 percent.[1] 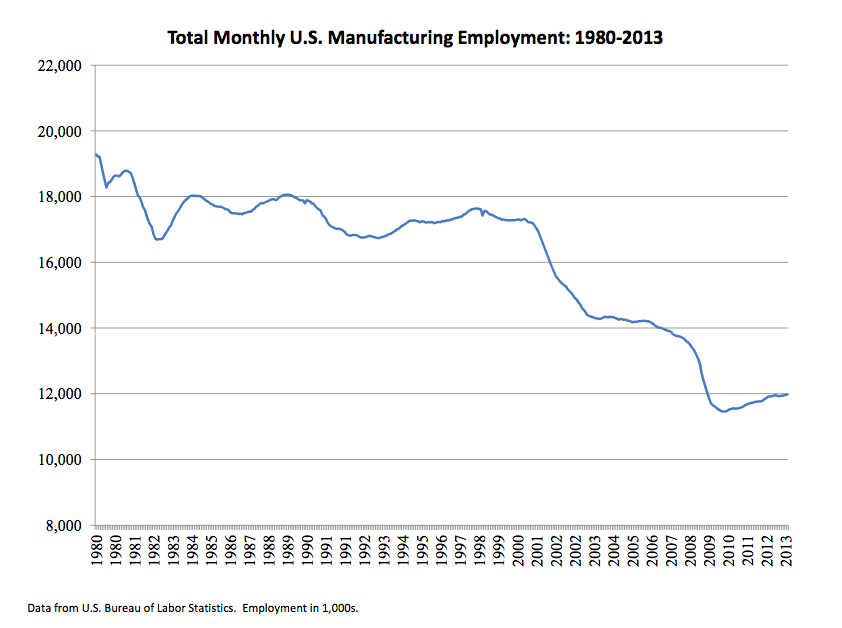 Despite the massive decline in manufacturing employment between 2000 and 2007, the employment-to-population ratio for prime age men with less than a four year college degree only fell by 2 percentage points between 2000 and 2007.   As we show in our paper, the reason that the manufacturing decline had such a muted effect on the aggregate labor market during this time period was because the U.S. economy was simultaneously experiencing a surge in housing demand. 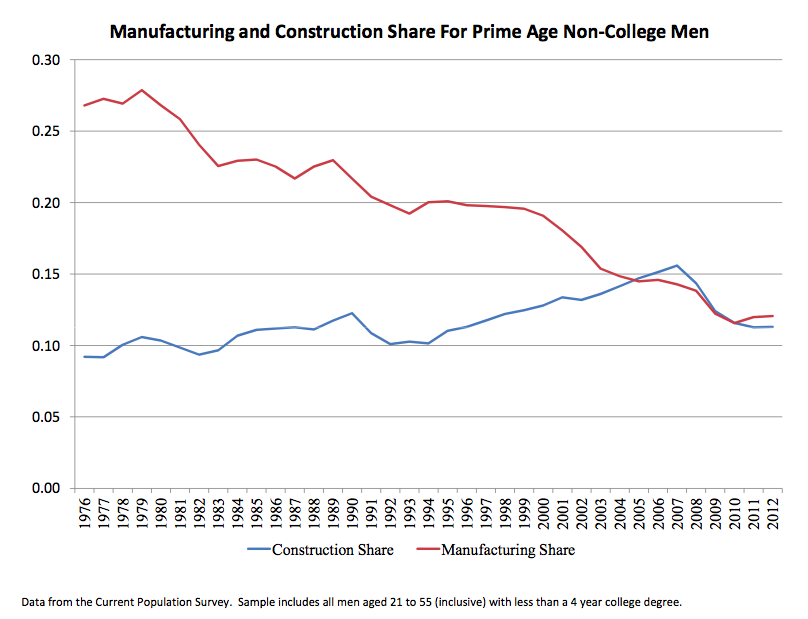 We emphasize in our paper that increased construction employment was only one labor market effect of the recent housing boom.  While it is true that people build more houses when housing demand goes up, they also tap into their home equity more and, as a result, spend more on restaurants, groceries, movie tickets, etc.  We show that only about 80 percent of the total employment response for men from the housing boom occurred through increased construction employment.  For women, the comparable number was less than 15 percent.

Using our estimates from this exercise, we calculate that roughly 40 percent of the total decline in the employment-to-population rate in the U.S. during the last 12 years can be attributed to the secular decline in U.S. manufacturing.   Additionally, we show that our estimates imply that the housing boom “masked” the labor market effects of the manufacturing decline during the 2000-2007 period.   Had it not been for the temporary housing boom, total employment of workers aged 21-55 would have been lower by roughly 1.3 million in 2007.  Over the total 12 year period between 2000 and 2011, our estimates imply that the housing market had very little effect on U.S. employment, most plausibly because the gains that the housing boom provided to the aggregate labor market during the boom period were immediate undone during the subsequent housing bust.

Taken together, our results suggest that non-college workers are facing a much worse labor market than they did in either 2000 or 2007. For such workers, manufacturing and housing-related activities are important sectors for employment.  The decline in manufacturing employment — at least so far — has been persistent, and possibly permanent.   While housing demand increased above long run historical levels temporarily, it has now returned to those historical levels and is unlikely to return to the levels that “propped up” the employment of men without a college degree for a very long time.

We thus conclude that an important share of the current low rate of employment in the U.S. can be understood as a consequence of the ongoing decline in manufacturing, as opposed to factors directly related to the Great Recession.  Because of this, we do not expect the employment of displaced manufacturing workers to permanently respond to many of the temporary policies discussed by policymakers in the last few years.  Just like the temporary housing boom, temporary tax credits and temporary increases in government spending are unlikely to permanently alter the demand for workers without a college degree.

The historical response to declining demand for less-skilled workers is for workers to accumulate skills that are valued in the labor market, both now and in the future.  This explains, in part, why college enrollment rates have been steadily increasing over the last fifty years.  In
fact, the return to attending college has never been higher.  However, these educational investments take place over a long period of time.  Therefore, we do not expect to see the low employment-to-population rates for prime-age workers with less than a 4 year degree to revert back to 2007 levels anytime soon.  The consequences of these reduced employment opportunities for millions of less-skilled workers will likely reverberate beyond the labor market and affect both the marriage market as well as the educational attainment of a generation of children who may face reduced economic opportunities as a result of economic decline experienced by their parents.

[1] Data from the March Supplements to the Current Population Survey.