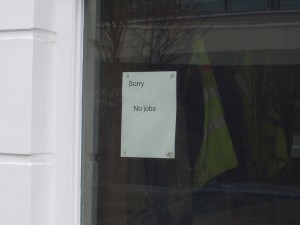 Our latest podcast, “Crowded at the Top,” presents a surprising explanation for why the U.S. unemployment rate is still relatively high. (You can download/subscribe at iTunes, get the RSS feed, listen via the media player above, or read the transcript.)

It features a conversation with the University of British Columbia economist Paul Beaudry, one of the authors (along with David Green and Benjamin Sand) of a new paper called “The Great Reversal in the Demand for Skill and Cognitive Tasks“:

What explains the current low rate of employment in the U.S.? While there has substantial debate over this question in recent years, we believe that considerable added insight can be derived by focusing on changes in the labour market at the turn of the century. In particular, we argue that in about the year 2000, the demand for skill (or, more specifically, for cognitive tasks often associated with high educational skill) underwent a reversal. Many researchers have documented a strong, ongoing increase in the demand for skills in the decades leading up to 2000. In this paper, we document a decline in that demand in the years since 2000, even as the supply of high education workers continues to grow. We go on to show that, in response to this demand reversal, high-skilled workers have moved down the occupational ladder and have begun to perform jobs traditionally performed by lower-skilled workers. This de-skilling process, in turn, results in high-skilled workers pushing low-skilled workers even further down the occupational ladder and, to some degree, out of the labor force all together. In order to understand these patterns, we offer a simple extension to the standard skill biased technical change model that views cognitive tasks as a stock rather than a flow. We show how such a model can explain the trends in the data that we present, and offers a novel interpretation of the current employment situation in the U.S.

So it appears that, while returns to education remain strong, there are far too many highly educated workers for the available jobs. We also make note in the podcast of a new paper by Hal Salzman, Daniel Kuehn, and B. Lindsay Lowell which argues that, for all the hand-wringing about the U.S.’s inability to educate (or import) a sufficient number of STEM workers, there is in fact no shortage of such workers and that only half of U.S. STEM graduates end up with a STEM job.

We also make note of one potential silver lining in this “de-skilling” process, as Beaudry calls it: more highly educated workers may flow into fields like teaching. It’s worth noting that decades ago, when educated women had fewer job options than today, many of the best and brightest were teachers. Their outflow from the teaching ranks put a hurt on education in general. For further reading, see “Do Alternative Opportunities Matter? The Role Of Female Labor Markets In The Decline Of Teacher Supply And Teacher Quality, 1940-1990,” by Marigee P. Bacolod; and “Why the Best Don’t Teach,” by then-New York City schools chancellor Harold O. Levy.

I believe that the paper by Salzman, Kuehn and Lowell make a fundamental mistake by confusing DEGREED with EDUCATED. I cannot find that distinction anywhere in the Economic Policy Institute paper. If I am correct that people are mistaking degreed for educated - which the data and my experience as a math professor lead me to believe I am - then there IS a dearth of well educated STEM students.
Here are just two of many pieces of evidence. (For those who want to see more, you can go to my blog inside-higher-ed.com)
First, here is a direct quote from how one of the country's top research universities brags in a magazine that it is working hard to produce STEM graduates:
"In a typical [physics] class, they hear one or more 10-minute lectures over the material, talk about two-minute problems in groups and discuss their answers. Often there is a demonstration that illustrates the material. At last, they go home and rework the original set of homework problems... Students immediately responded to the new format; they were clamoring to get in."
Here are some of the things students (with very high SAT's, probably averaging 740 in math) say about the course.
“His exams have unlimited time and are so easy!.."
“if you ask him questions during exams, he'll answer them for you in full detail. really easy to do well in this class”
“It was touted as the best at [the university], but I just finished the semester, and I feel like I did not learn much ... I am a Physics major and am worried about the voids in my background. Please give more fundamentals”
Almost 90% of the students in this class have historically expected an A.
Now, here is some data (from a totally different source) that I believe show that there is a dearth of well trained STEM graduates and that it shows up in salaries reported by the State of Texas for majors in "Computer and Information Sciences, General" and by Carnegie-Mellon University.
UT, Austin
and UT, Dallas has students with about the same SAT range
Median
Salaries are $71,059 and $65,328, respectively.
Texas State
at San Marcos and UT, Tyler also have about the same SAT range.
Median
Salaries are $58,992 and $45,336, respectively.
Austin
Community College Assoc Deg Median is $57, 395 but
South Texas
College Median for the same degree is $26,597.
Finally, at Carnegie-Mellon University, the median was $95,000.
From all of this, plus much more,I cannot help but conclude that degrees don't always represent ability or education. I also conclude that not enough universities are providing their students with the appropriate skills - though some are, and those students are in high demand. This lack of training is much to the detriment of students and parents that believe they are getting a good education. There are many talented young people who may not be able to attend MIT or CalTech or Carnegie, but, if given a legitimate education could find employment in these STEM fields They have been robbed of their chance by the attitudes of too many people in higher education.
Clark Kerr's statement from 1980 cannot be repeated too much, “…This shift from academic merit to student consumerism is one of the two greatest reversals of direction in all the history of American higher education...” THAT is the problem.

“His exams have unlimited time and are so easy!..”

Just the opposite of one of my graduate physics teachers. If you had had the answers to all the questions written out in front of you, you could not have copied them down in the allotted time. The guy believed in challenges :-)

As the US has spent less and less on research and given the "Free Market" more tax breaks and less regulation , getting an education is less and less likely to get someone into the middle class. In countries that have not adopted radical captialism such as Sweden, Denmark, and South Korea, one can still get an education and get into the middle class.
As an 40 over Ex-pat with a master's degree I can find better paying jobs in other countries than I can in the U.S. For the countries have natioalized health care and disablity, so it is not a burden to hire a worker that statistically will cost more for health care.

They didn't blame over education.

As an educator, I disagree that the higher qualifications for teaching is a silver lining for education. Schools need career teachers who are inspiring educators and who understand the complexities of learning and how to explain subject to students who do not have a natural flair for it.. Having the highest qualification in a subject in my view does not help in this and results in resentment by the teacher who may feel he did not achieve his potential, and disenfranchisement of many students. Vera

Another upside - if there's no shortage of STEM grads, then increased government spending on scientific research will :

(a) Speed technological progress (and long-run growth).
(b) WITHOUT increasing scientists wages.
(c) AND reducing unemployment amongst all skill levels RIGHT NOW.

However, if there really *was* a shortage of STEM grads, then more funding for research would benefit society at large only in the long-run. Since there isn't a shortage, funding research will benefit workers of all skill-levels, by expanding employment and boosting growth RIGHT NOW.

If no STEM shortage means government science boosts employment today AS WELL AS growth tomorrow - there is hope for us yet.

If my policy goal were to boost employment amongst low-skill workers, and my options were :

(a) Building unnecessary infrastructure ( ' bridges to nowhere ' ).
(b) Funding the science of tomorrow.

I'd be glad to have science funding as a choice!

During the Vietnam war many available young men were swept from the job market, those remaining had an easy time finding gainful employment. Meanwhile college enrollment swelled because of draft deferments. By the time the war ended women had begun entering the workplace in unprecedented numbers, the young men no longer being drafted were now vying for jobs, and the glut of college graduates now in the workplace were making biased hiring decisions that froze out high school graduates. This was all during a time our manufacturing based economy was beginning its paradigm shift into robotic/computer automation, foreign competition and outsourcing was erasing market share, and the service based economy was on the rise. What we have today is simply the decades long fallout from those processes.