The Right Profile Lives Again (for About 15 Minutes)

A long time ago, I played in a rock band, called The Right Profile. It was a great deal of fun. We wound up getting a record deal with Arista. Here’s a picture of us with Clive Davis, who was willing to take this picture pretending we’d already gotten a gold record (I’m the guy shaking his hand): 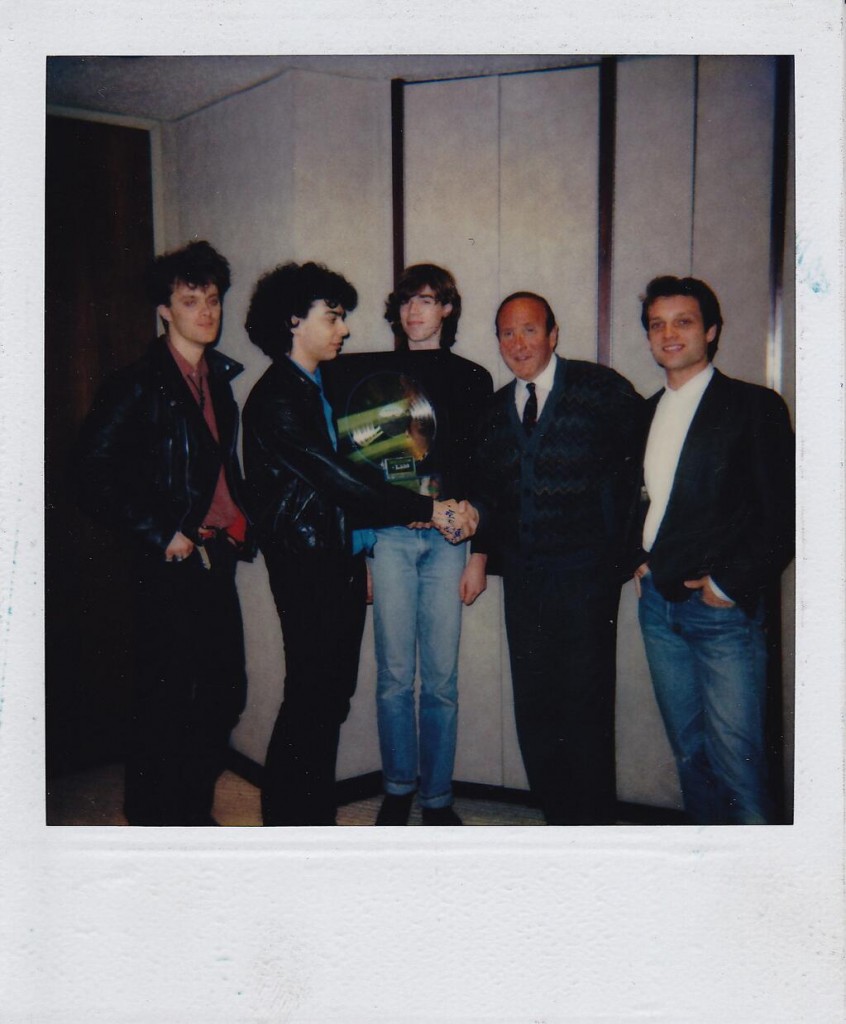 But I quit the band about a year later. We were in the middle of making our first record. I decided I didn’t want to try to be a rock star after all, as much fun as it was. Writing suits me better.

I pretty much went cold turkey and have performed almost no music since then. But all these many years later, The Right Profile is set to ride again, if only for a few songs. We were asked to participate in a concert by the Vagabond Saints’ Society at a centennial celebration for the city of Winston-Salem, N.C., on Fri., May 10, from 7-10 pm.

I can’t wait. Winston-Salem has produced some amazing music over the years (the dB’s, Ben Folds, Let’s Active, the Allisons, Dillon Fence, and many more), and it will be great fun to hear these guys again and crawl backwards into the time capsule. Also I can’t wait to play again with my bandmates Tim Fleming, Jeffrey Dean Foster, and Jon Wurster.

I realize that the overlap of Freakonomics fans and TRP fans who are able to get to Winston-Salem, N.C., by Friday night is probably close to zero, but if you do happen to make it please come and say hello …

Do yourself a favor and pick the the novel "Time Won't Let Me" by humorist Bill Scheft. This sounds exactly like the plot of the book.

Stephen, the overlap is definitely not zero. I am a fan of both. We met when TRP played at Friday the 11th in Boone. I am looking forward to Friday night with great anticipation.

I'm in Winston-Salem. I've listened to all of the Freakonomics podcast. I'll see if I can make it. I actually quit a band I was in, partly based on "The Upside of Quitting" podcast.

I still have access to a warehouse with some equipment in downtown Winston-Salem. Off 7th and main. If you need some practice space.

My wife and I will be there, Dub Man. We're driving up from Florida just to see ya's. Both Freakonomics and TRP fans. Staying at Tim's crib. Can't wait to see you guys, it will be super atomic fun. — Kenny Ro'

See you in Winston.

Stephen, was the name chosen because you were fans of the Clash? Or fans of Montgomery Clift? Their song The Right Profile was about Montgomery's car crash.

RPM, according to Tim Fleming (their bass player) is was about Montgomery C. and also the Clash song, but Dubner can fill us in..

Wish I could make it. I remember when you told me you were quitting music, selling your gear (including your nice Twin Reverb)_and going to NY to study writing. I thought you were nuts. LOl But turned out well. By the way, love your books, but my favorite is still your first book.

Everyone was buzzing with anticipation about the reunion of The Right Profile. Now we want an encore!

I remember long...long....long time ago, when I was just shy of being old enough to get into a bar...but managed to sneak into a place set on a mountain side in Blowing Rock NC....and The Right Profile was the band playing....the reason this is important is, I was amazed at the draw and energy it gave me. Loved the music....and was immediately addicted to the live vibe.

Why it crossed my mind this morning over coffee, well I don't know, but a short search brought me here. I was a little disappointed to hear about your "That Thing You Do" aspect of your first foray into the biz...but to each his own. But that night was just a patch in the tapestry that was music scene of the day...and a small part of the soundtrack of my journey....Hope all is well....and Peace! Bill G.

Somewhere in my parent's basement is a board tape of you guys singing "If Heaven Ain't A Lot Like Dixie" by Hank Williams Jr. Too bad I can't find it.

That was from a show at Vanderbilt. Enjoyed talking with you that night. I went on to become an economic research assistant at the Federal Reserve Board. Would enjoy chatting about economics sometime.

In the process of digitizing all my old cassettes (yes, cassettes), I came across one titled (in your handwriting) "The Right Profile Kicks Bill's Butt." So I decided to head to google and see what came up; this post did! Thanks for the great memories and great music.

Steven. I nearly dropped my teeth when you said you were in the right profile. I am a huge fan of yours as the Freakanomincs guy but had no idea I knew you in a past life! I was Tim Fleming's roommate. We used to live in the old mill near Boone. We printed your t-shirts using a photo I took of you playing guitar. We sold them at PB Scott's during a gig. I hate I missed the concert in May. Would have loved to see you guys again.

2015 - 11 - 29 --- Stephen - so at the end of the "everyone in a rock band" podcast you said you had a song by the Right Profile at the end of the podcast - and I kept listening and the podcast ended, and it took me a while to figure out that I just had to go on to the website to find it.

Enjoyed it - Fun, not too deep. (No sense in writing a critique on a band that's been broken up long enough to have reunions!) I love the db's, and am very fond of Ben Folds. (If you have not listened to it, the album he did with William Shatner, with the versions of Has Been and Common People, were incredibly moving and authentic. Whole album was a listening experience, in a deep profound way.)

Anyway, I wanted to hear what your band sounded like, and I got the chance and I thank you. But I do think you've moved on to something that more people appreciate - Freakonomics is awesome and changes your brain. Three or four chord rock and roll, while it's fun and helps people burn calories dancing, is like whipped cream with pudding. The first song you hear may change your brain. The next 2000 are pretty much derivative. (Hence, the Ben Folds / Shatner album comment. Not ordinary at all.) Thanks and all the best.