How Dirty Diapers End Up in the Recyling Bin 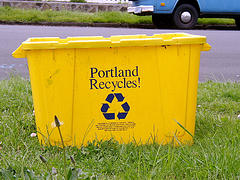 While it is true that human waste can indeed be recycled — as a medical “transpoosion,” as auto fuel, as heat for your home — that is not what’s happening in Portland, Oregon. People are indeed placing human waste in Portland’s recycling bins — in the form of baby diapers — but not because they want are recycling nuts. They just want to get rid of it, but the city has made trash pickup less frequent:

“It started when the city went to every other week garbage pickup,” said Far West Fibers President Keith Ristau. “Prior to that you’d get a dirty diaper maybe once a month. Now we get 60 pounds per shift. It’s not pretty.”

When the city of Portland launched its curbside composting program in October 2011, it simultaneously reduced trash pickups from once a week to once every two weeks. But recycling and compost bins are still emptied weekly.

No one wants shit marinating in their can for 2 weeks. Not surprised

Ottawa Canada did the same thing, but have a special program for diapers.

I bet Dr. Rathje would have appreciated this result.

In toronto, diapers go in the compost bin, picked up weekly.

Far West Fibers needs to transfer the cost of processing those diapers back to the city. The city is measuring its success by volume, not by cost. How would you value used diapers, $100/lb?

As a side note, the town of North Plains is having all kinds of livability issues because they host Portland's composting site - which smells terrible most of the time.

So the question, from a sustainability viewpoint, is: has this program been a success? Portland is now delivering less service (fewer trash pickups) for more money (trash rates went up) and causing problems for its residents, vendors, and the residents of one nearby town.

England tried making every trash bag need a paid sticker to be collected and got "fly dumping" which is throwing trash out of a car on a side road at night. If the trash bag survives the toss, the foxes and rats get into it and all the trash is strewn all over the area.

Needless to say, the pay per bag policy didn't last.

The way to cut down on trash is at the source.

This is one of the reasons why we use cloth diapers. We live in the country and although we pay for trash pick up, snowfall pretty much always cancels it, as does any holiday that falls near our pick up day. So we have 2 weeks worth of trash hanging around. As we recycle everything we can, we have very little in the trash, but I can't imagine having that many dirty diapers hanging around. We wash ours every 2 days, our waste would be 3 bags with diapers and is less than half a bag without!