Redemption at the Preakness 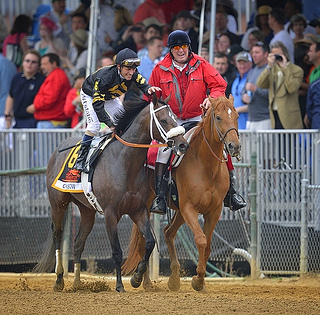 I made a mess out of this year’s Kentucky Derby.  The worst part is that a bunch of friends placed bets using my picks, collectively losing a large stack of money.

After the Kentucky Derby, I blogged about the misery, noting what a strange race the Derby was:

The race is 1.25 miles long and there were 19 horses in the race. Of the eight horses who were in the front of the pack after one-fourth of a mile, seven ended up finishing in back: 12th, 14th, 15th, 16th, 17th, 18th, 19th. Only one horse that trailed early also finished poorly, and that horse started terribly and was way behind the field from the beginning. In contrast, the horses who ended up doing well were in 16th, 15th, 17th, 12th, and 18th place early on in the race. Basically, there was a nearly perfect negative correlation between the order of the horses early in the race and the order of the horses at the end of the race!

This is really unusual in horse racing. Most of the time, you will see a strong positive correlation between the early ordering in the race and the ultimate finish position. What happened in the Kentucky Derby was that the early pace was too fast for the frontrunners to sustain for such a long race, and the frontrunners “hit the wall” (or at least that is what we call what happens to humans when they start too quickly in a race and then slow way down).

And then, not having learned my lesson about the foolhardiness of predictions, I went out on a limb:

Viewing the race through that lens, the best performer in some sense wasn’t the winner, Orb, but rather, sixth-place finisher Oxbow. Oxbow was in sixth-place early on, worked his way all the way up to second place, and then hung on at the end while all the other horses who had been near him early faded badly.

So not that you should be taking tips from me on betting the horses, but the next time Oxbow runs, I would say throw a few bucks on him!

At the time I wrote that post, I didn’t know that Oxbow would run in the Preakness.  And I certainly didn’t know that he would win convincingly at 15-1 odds, yielding a very large payday for me!

The only bad news: my friends were so disgusted by my Kentucky Derby picks that not a single person asked me for my Preakness picks.

I give my friends lists of winning lottery numbers too. They always lose stacks of money.

Hey, keep making predictions. I might throw a few bucks at your belmont picks. Or at least pay attention for next years preakness. But definitely not your derby picks. :)

Meanwhile, on the other side of the continent (or perhaps in a different world) the horse & I spent a large part of Saturday ambling through a mountain meadow filled with camas & delphiniums, trotted for a while along a dirt road through pine forest, stopped to lunch & graze beside a babbling stream...

so you're saying you have a gambling problem...