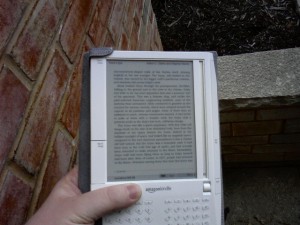 Digital rights management, or DRM, is a set of technologies used to control piracy. An example is the “Fairplay” system that Apple used until recently on most songs sold in its iTunes store. Fairplay was a set of digital locks that blocked certain uses – for example, a song could be played only on up to five authorized computers. As you might imagine, DRM has been controversial, at least among some people who want to make uses of content they’ve purchased – like making a back-up copy, or copying small portions of a work for fair use purposes. Music DRM once involved the installation – without users’ knowledge — of a particularly malicious bit of software that modified, and sometimes broke, the operating systems of customers’ computers.  That strategy imploded amidst government investigations, class-action lawsuits, and a storm of terrible publicity. In contrast, e-book DRM has been nowhere near as controversial, or ineffective. Still, the fact remains that many DRM-haters exist.

Given this, the question is occasionally raised whether DRM prevents enough piracy to make it worthwhile for a content distributor to annoy some of its customers.  The dominant view is that without DRM, e-books are liable to be distributed for free over file sharing networks and this will lead in turn to reduced author and publisher profits and falling production of books. But some suggest that DRM makes little difference, and publishers would do well to get rid of it. Those who can afford to buy books, songs, films, etc., don’t pirate them. Those who pirate aren’t otherwise going to buy.

So which view is right? We now have an interesting bit of evidence on that point. It comes from Tor Books, a science fiction and fantasy publisher based in Britain, but with a substantial U.S. presence.  Tor announced in April 2012, just over a year ago, that it was removing DRM from its e-books.  This was a big deal in the world of DRM-haters. Now, one year later, Tor has announced that the experiment had largely been successful – that is, Tor sees little evidence of increased piracy of their e-books following the removal of DRM — and that the publisher will be keeping its e-books DRM-free. The significance of this experiment is a little unclear—sci-fi readers, Internet geeks, and DRM-haters are three groups that overlap more than a little—but nonetheless, it is an interesting move for a fairly large publisher. In Tor’s words:

For our particular readership, we felt it was an essential and fair move. The genre community is close-knit, with a huge on-line presence, and with publishers, authors and fans having closer communication than perhaps some other areas of publishing do. Having been in direct contact with our readers, we were aware of how frustrated many of them were by DRM. Our authors had also expressed concerns at the restrictions imposed by the copyright coding applied to their ebooks. When both authors and readers are talking from the same page, it makes sense for the publishers to sit up, listen and take note—and we did!

Take note of something Tor has said here – the sci-fi genre community is “close-knit”, at least relative to the broader community of book readers. This is important, because a relatively small community with members that communicate with one another is more likely to follow anti-piracy norms  — that is, informal rules against piracy — than is a bigger, more diffuse community. So if Tor gives its readers freedom, but asks them to respect authors’ interests, its readers are more likely to obey – at least if Tor and its authors remain in readers’ good graces.

When we made the announcement there was an immediate reaction from the media. The Guardian explained how ‘Tor rips up the rulebook on digital rights management’ and the BBC featured a long article with arguments from both sides, drawing links with the music industry’s experience of the transition and highlighting that “the key difference with the music business is that the book trade can see what mistakes the record labels made and avoid them.”

If you’re going to get rid of DRM, you might as well enjoy some good press. And Tor has.

But the most heartening reaction for us was from the readers and authors who were thrilled that we’d listened and actually done something about a key issue that was so close to their hearts. They almost broke Twitter and Facebook with their enthusiastic responses. Gary Gibson, author of The Thousand Emperors tweeted: “Best news I’ve heard all day.” Jay Kristoff, author of Stormdancer, called it “a visionary and dramatic step . . . a victory for consumers, and a red-letter day in the history of publishing.”

China Miéville called the decision “a game changer” and long-time anti-DRM author and blogger Cory Doctorow praised the decision on both the Guardian Technology Blog and boing boing, the blog he co-edits: “I think that this might be the watershed for e-book DRM, the turning point that marks the moment at which all e-books end up DRM-free. It’s a good day.”

And Charles Stross, author of the Merchant Princes series, recently said “I’m happy to see that Tor have gone DRM-free with their e-book editions. DRM doesn’t impede pirates, but it subjects honest customers to a monopoly tightly controlled by the owners of the DRM software, reducing readers’ freedom and hampering competition.”

We had readers contact us directly explaining how “DRM is anti-customer” and how pleased they were by this “forward thinking step.”

The move has been a hugely positive one for us, it’s helped establish Tor and Tor UK as an imprint that listens to its readers and authors when they approach us with a mutual concern—and for that we’ve gained an amazing amount of support and loyalty from the community. And a year on we’re still pleased that we took this step with the imprint and continue to publish all of Tor UK’s titles DRM-free.

Well, whether DRM impedes pirates or not is precisely the relevant question. Tor says they haven’t noticed any increase in piracy of their e-books following the removal of DRM. They are, however, cagey about how they know this.  Probably it’s a combination of their sales projections being met, and also not seeing increased traffic in their books on notorious filesharing sites.  As a rough-and-ready measure of piracy, that’s probably pretty good, although by no means definitive. The bottom line is that a lot more data is needed.  Tor hasn’t experienced an apparent increase in piracy – would the same be true for a general-interest publisher? For a children’s book publisher? For a college textbook publisher? And what about other forms of media that are currently subject to DRM? Tor’s experience is a useful first step. Are there any other companies out there who currently use DRM but are willing to remove it and see what happens?