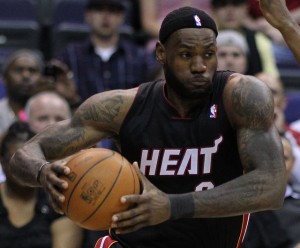 LeBron James was recently given his 4th Most Valuable Player award by 120 sportswriters. Well, at least 119 sportswriters agreed LeBron was MVP. Gary Washburn – of the Boston Globe – thought Carmelo Anthony was the league’s MVP in 2012-13.

It doesn’t take much effort to establish that LeBron was more valuable than Melo. The numbers tell us (numbers taken from theNBAGeek.com) that LeBron in 2012-13 was a much more efficient scorer from the field; and a better rebounder, passer, and shot blocker. LeBron was also better with respect to steals and personal fouls. Yes, Melo scored more. But that is just because Melo took many more shots than LeBron. Unfortunately, people tend to think that players who take many shots have a huge impact on outcomes in basketball (consequently, players have an incentive to take as many shots as their coaches and teammates will allow).

Although no other sportswriter shared Washburn’s view that Melo was MVP, 102 of the 120 voters thought Anthony was one of the five most valuable players in the league. So Washburn was not alone in his belief that Anthony is a “great” player.

The numbers, though, suggest otherwise. But rather than belabor the story those numbers tell (again, the numbers at theNBAGeek.com make it clear Anthony was really not that productive), I wish to employ the debate about the relative merits of Carmelo Anthony to make a very different observation.

) detailing his experience in both the Bush and Obama administrations. In his book is the following story (from page 138 of the book):

ON MARCH 14, 2009, the news broke that Treasury had authorized the insurance giant AIG to pay $168 million in “retention bonuses” to employees in its Financial Products division, the very unit whose reckless bets had brought down the company. Taxpayers had put up $170 billion (including $40 billion from TARP) to keep AIG’s collapse from precipitating a meltdown of the global financial system, and now the executives from the division that had caused its ruin were going to be paid lavishly.

..When we discussed the payments with (Neel) Kashkari and the TARP team, they didn’t seem to begrudge the AIG executives the bonuses at all. They told us that the payments were necessary to keep the “uniquely” qualified executives in their jobs to do the delicate work of unwinding the enormous mess they had created. As to the reaction from Congress, Kashkari dismissed it as being “political.” By that point, Kevin (Puvalowski) and I were used to these types of reactions from Treasury. The Wall Street fiction that certain financial executives were preternaturally gifted supermen who deserved every penny of their staggering paychecks and bonuses was firmly ingrained in Treasury’s psyche. No matter that the financial crisis had demonstrated just how unremarkable the work of those executives had turned out to be, that belief system endured at Treasury across administrations. If a Wall Street executive was contracted to receive a $6.4 million “retention” bonus, the assumption was that he must be worth it.

When we say a person is “worth” what they are paid, we are arguing that the person’s wage is equal to their Marginal Revenue Product (MRP). MRP is comprised of two factors: Marginal Product of Labor (or a person’s productivity) and Marginal Revenue of Output (or the value of that productivity in the marketplace).

When it comes to sports – as Gerald Scully demonstrated almost 40 years ago – we can use data to measure an athlete’s MRP. Specifically, marginal productivity can be assessed by looking at how a player’s statistics impact wins (see the calculation behind Wins Produced to see how this can be done with respect to Carmelo Anthony and any other basketball player). And the value of this output can be determined by looking at how wins impact team revenue.

How would we do something similar for a Wall Street executive? One might look at how a company performed with and without the executive. But how would you know if the changes you observed were about the executive or someone else in the company (or just luck)?

One could assume that markets are efficient, so whatever the market decided to pay these people must be “correct.” Beyond the observation that assuming an answer isn’t much of answer, let’s return to what we already know about sports.

story. As detailed by Michael Lewis, the Oakland A’s – with a very low payroll – were able to compete with the best teams in baseball because the A’s were able to purchase undervalued assets. Specifically, the A’s discovered that players who excelled at on-base-percentage could produce wins without costing Oakland much money. Unfortunately for Oakland, as economists Jahn Hakes and Raymond Sauer detailed, the market in baseball adjusted.

This story highlights something important about the history of baseball’s labor market. Since the 19th century, the data has existed to measure a professional baseball player’s on-base percentage. But it was not until the 21st century that this data was understood by most decision-makers. In other words, the labor market in baseball was not efficient for over a century.

A similar story can be seen in the NBA. Published research has indicated that scorers – who are not tremendously efficient (like Carmelo Anthony) — tend to be overvalued by decision-makers in professional basketball. Again, decision-makers do have access to data that would allow better player evaluations. And again, the labor market in the NBA does
n’t appear to be efficient.

Each of these stories tell us that at some point there was (and in the case of the NBA, still is) a disconnect between a worker’s wage in professional sports and their impact on outcomes. The sports market comes with an abundance of information and fairly clear incentives to get it “right.” After all, in sports, bad decisions lead to an abundance of negative press and fan reaction.

What about the market for Wall Street executives? Well, there doesn’t seem to be an abundance of information about the productivity of these people. And if a firm gets a decision about an executive’s hiring and pay wrong, who is going to know or care? After all, how many AIG executives can you name?

It may be the case that the AIG executives and other Wall Street employees are worth what they are being paid. But since we can’t measure their productivity objectively – or we don’t know the “Wins Produced” for these people – we cannot be sure that wages and MRP are consistent.

One last observation: the story of this year’s MVP vote illustrates another issue with measuring a worker’s productivity. Clearly, I think Melo is not that great of a player and that opinion is based on what I think the data says. But others – who have access to the same data – may disagree with my assessment. This disagreement suggests yet another problem with the measurement of a worker’s MRP. Even when objective data exists, reasonable people (and not so reasonable people) will disagree on what that data says.

When it comes to Wall Street executives, we don’t seem to have objective data to evaluate the productivity of the individual. And when we review the case of Carmelo Anthony, it seems clear that even if such data existed, we might not be able to agree on what that data means. So maybe no one should be so sure that those executives “earned” those bonuses back in 2009.