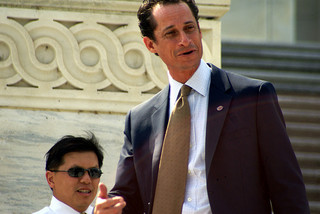 Anthony Weiner is still running for mayor of New York as I write this, though that status may soon change. Not coincidentally, a reader named Jon Creem (an unfortunate aptonym in this case?) writes in to say:

Yesterday I enjoyed listening to your show about “Quitting.” The segment where you explained “sunk cost” was especially interesting.

I took the explanation as people’s unwillingness to give up due to the amount of investment (time, money, etc) they have already made.

Then, when catching up on the latest Anthony Weiner mayoral saga, I couldn’t help make a connection.

Is this guy refusing to remove himself from the race because he feels he has done too much already to drop out now? In my opinion the odds are stacked against him regardless of how good a politician he is.

I assume continuing to campaign will only cost him more time and money. Is it worth it for him to continue?

Insofar as pride and ego are components of sunk cost, I guess Jon is right. On the other hand, it doesn’t strike me that Weiner’s continuing to run is really about sunk cost. Modern politics is so often an exercise in ego, hubris, and narcissism — and if I were to armchair-analyze Weiner, I’d suggest that these factors are much more important than the sunk costs of time and money.

Plus which: it could be argued that even this much bad publicity is, in the end, publicity, which might serve him well months or years down the road.

Plus which again: who’s to say that Weiner won’t actually win the mayoral race? At this moment it seems unlikely but New York politics aren’t very predictable.

By the way: not many people seem to be paying attention (yet) to independent candidate Jack Hidary, but for those voters hoping to keep a Bloombergian approach (and there are many), Hidary would seem to be an enticing choice.

I'd love to think there was some sort of logic involved like Jon said, but I tend to agree with Stephen. This guy is all hubris and ego.

Weiner is a joke and his insistence on staying in the mayoral race can only be explained by the fact that it allows him to use his (should've been forfeited) congressional war chest as his own ATM card (on top of his presumed heavily "friend o Clinton" subsidized flatiron apartment - mkt rent ~20k per month). The only thing he achieves is proving that despite the historically low political bar, it can still drop even lower. Shame!

What about his wife Huma? Do you think she is staying with him because she has already invested so much (time mostly I guess) with him?

Or maybe she simply issn't bothered about his hobbies? Not everyone in the world buys into the whole conventional monogamy/jealousy thing. Not even everyone who pays lip service to it :-)

There is speculation that, because his wife Huma has had such sweetheart employment from Hillary Clinton and a Clinton related consultancy even to the potential of ethics violations (Special Gov't Employee @ $135k/year plus $355k as a consultant during that same time after the baby was born), that he and Huma have a "fix" in with the Clintons and she doesn't care about Anthony's issues since Anthony will become the mayor due to the political machine behind him.

Jon Creem an aptonym, why?

How about a guy named Weiner that is becoming most famous for his member as an aptonym?

I think Anthony Weiner has adequately demonstrated that he is not a rational actor.

The part I find most puzzling is the motivation to send a picture of your penis to a woman in the first place. I have what I thought was a pretty wide acquaintance with women and I can't say I've ever known one who regarded the penis as an object of beauty the way they might a man's physique. Some might be interested to know how big it is, particularly if they were planning on making use of it but I don't see them as just wanting to look at it. Is this a new thing? Maybe I'm just last generation.

Anyway it seems very strange, a man is usually very interested in his own penis but thinking because you are interested in something everyone must be is an idea you are supposed to develop past when you are about six years old.

Hi I really liked the podcast about "quitting" and I think I have told everyone that will listen. (It also makes for awkward conversation on the subway with strangers).
I also listen to TED talks and in one of them, a PH D in Neuroscience describes some of her experiments with "faking it until you become it". Basically her theses is that if you fake it long enough you will become what you want. She gives this example at one of her classes at Harvard where a girl felt that she did not belong in the class or school. The Phd told the student to fake it until she makes it. In other words if you want to be confident act as if you are until it becomes second nature. She did some experiments and in fact the chemicals in the brain in fact do change when one fakes it. My question is when is it good to quit and when is it good to fake it?