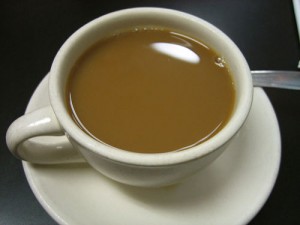 In our hour-long podcast “The Suicide Paradox,” we explored some of the facts and myths about suicide. A new Harvard study highlights another interesting fact: coffee drinkers have a lower risk of suicide. From Time:

According to a study performed by the Harvard School of Public Health and published this month in The World Journal of Biological Psychiatry, people who drink two to four cups of java each day are less likely to commit suicide than those who don’t drink coffee, drink decaf, or drink fewer than two cups each day. The study followed over 200,000 people for at least 16 years. And it’s not just a weak link: the researchers found that the suicide risk was cut by around 50 percent for caffeine fiends.

The study doesn’t establish causation, but lead researcher Michel Lucas confirmed in a statement that it’s definitely caffeine, which previous research indicates may act as a mild antidepressant, that’s driving the results.  “Unlike previous investigations, we were able to assess association of consumption of caffeinated and non-caffeinated beverages, and we identify caffeine as the most likely candidate of any putative protective effect of coffee,” he says.