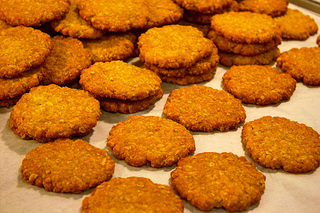 We bought a box of Anzac biscuits — a very tasty cookie with no eggs or fat, thus not too many calories and easily preserved. The company, Unibic, states on the box that “4% of sales (revenue) go to the RSL (Returned and Services League).” This reminds me of Newman’s salad dressings, which advertise that all profit goes to charity.

It’s not clear which method would provide more money for charity generally, but I prefer the percent of revenue approach—it removes any incentive to raise costs (executive pay, for example). Either way, though, it’s nice that a few companies support charity so well and so openly. What other examples are there of products that support charity? And which method (percent of revenue or profit) is preferable?