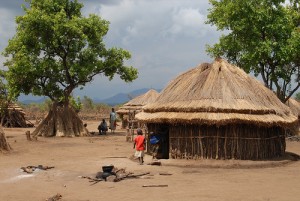 Economist Jeffrey Sachs, the force behind the Millennium Villages Project, is in the news as a book chronicling his efforts is released – Nina Munk’s The Idealist: Jeffrey Sachs and the Quest to End Poverty

.  You can read about it in the Wall Street Journal, or read excerpts in the Huffington Post.  Sachs’s project is a major effort at a new way to fight poverty in Africa, as Joe Nocera, writing in The New York Times, explains:

The quest began in 2005, when Sachs, who directs the Earth Institute at Columbia University, started an ambitious program called the Millennium Villages Project. He and his team chose a handful of sub-Saharan African villages, where they imposed a series of “interventions” in such areas as agriculture, health and education. The idea was that these villages would show Africa — and the world — how the continent could loosen the grip that extreme poverty had on so many of its people.

Sachs admirably raised millions, drew attention to efforts to alleviate poverty around the world, and launched Millennium Villages in several countries. However, the reviewers hone in on the book’s discussion of many of the difficulties, such as drought, disease, locals who resisted the idea of selling their prized camels at the new markets set up for them, or locals who used the anti-malarial bednets on their goats rather than their children.

These are powerful (negative) stories. Advocates of Millennium Villages tell powerful stories, too. How can we get past stories, and get to answers? One frustrating fact is that for all the money spent, it is difficult to know how much better off the beneficiaries in these select group of villages are. As Nocera points out:

It has soaked up large sums of money — the original seed money was $120 million — which its critics believe could have been better used on more targeted, less grandiose forms of aid. Because Sachs, for years, refused — on ethical grounds, he said — to rigorously compare the results at his villages with villages that didn’t get the same kind of help, development experts complained that there was no way of knowing if the project was making a difference.

Sachs elaborates on his objection in a response to Nocera’s column: he specifically opposes the scientifically rigorous method of evaluation, the randomized control trial. Randomized control trials, just like those used in medicine, involve having a control group that doesn’t get the treatment, or gets an alternative treatment (or maybe a placebo). It’s helpful to have control groups nearby for reasons documented in the book – if people are no better off after the millions invested, was it the failure of the village’s new livestock market or the regional drought that affected all the villages in the area? Maybe people were worse off, but would have been even more worse off had it not been for the Millennium Villages?

Sachs’s response, however is that: “The ethical reasons are that ‘controls’ in a trial should not be denied basic, proven lifesaving interventions.”

In this case, I would argue that ethics demands a randomized control trial, not the other way around.

What Sachs succumbs to is natural and human. An analogy by Princeton philosopher Peter Singer, often used to motivate giving to poverty causes on the premise of utilitarian ethics, illuminates my point. The Singer analogy asks “If a child is drowning in a lake and you are walking by, even if doing so will cost you $300 (perhaps in ruined clothing, or a missed meeting), do you have an ethical obligation to jump in the lake and save the child?” Most will say yes. Then, when asked “If sending $300 to an organization (such as Millennium Villages) that is working to help the impoverished would save a life, do you have an ethical obligation to do so?,” most will say no (or say yes, but cringe). (You can see Singer posing these questions to Stephen Colbert here.)

Why the different perception of ethics for these two scenarios? Two commonly heard retorts: