What Can a Ball and a Bucket Teach Us About Why Women Earn Less Than Men? 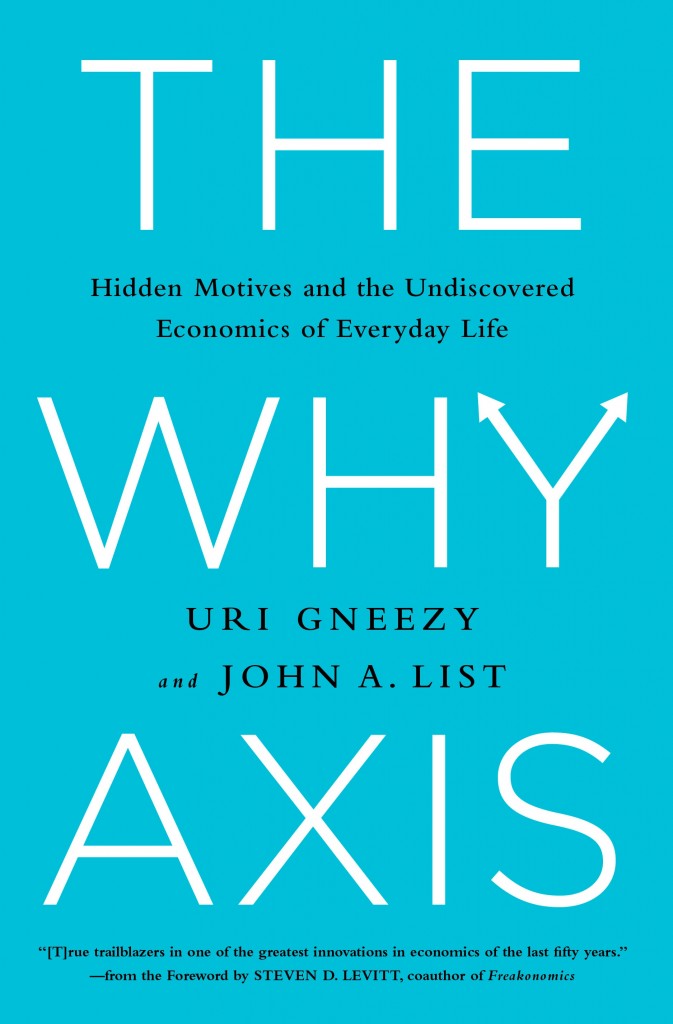 John List and Uri Gneezy have appeared on our blog many times. Now they have written a book, The Why Axis: Hidden Motives and the Undiscovered Economics of Everyday Life. (The title, by the way, was crowdsourced on this blog). Below is the first in a series of guest posts adapted from the book; Gneezy spoke about this research in our podcast “Women Are Not Men.”

What can a Ball and Bucket Teach Us About Why Women Earn Less than Men?
By Uri Gneezy and John List

The sign on the road leading to the city of Shilong in the Khasi hills of northeast India had a puzzling message: “Equitable distribution of self-acquired property rights.” Later we’d find out that the sign was part of a nascent men’s movement, as the men in the Khasi society were not allowed to own property. We’d traveled across the world in search of such a parallel universe—one where men felt like “breeding bulls and babysitters”—because evidence in the U.S. was starting to point to a massive gap in preferences towards competition between the genders and we wanted to understand the reason why.

Our plan was to take a simple game to a matrilineal society (the Khasi) and patrilineal society (the Masai in Tanzania) and give participants just one choice: Earn a small certain payment for their performance in the game or earn a much bigger payment for their performance, but only if they also bested a randomly chosen competitor. The game we settled on? Tossing tennis balls into a bucket 3 meters away.  The experiment was conducted with Kenneth Leonard as a coauthor.

First, though, we headed to the plains below Kilimanjaro, the tallest mountain in Africa, where the proud Masai tribesman lived. The Masai, dressed in brightly colored robes and carrying their spears, follow the calling of their cattle-hearing ancestors. The more cattle a man has there, the more wealth he possesses. A man’s cows are more important to a Masai man than his wives and a cattle-wealthy Masai man can have as many as ten wives. 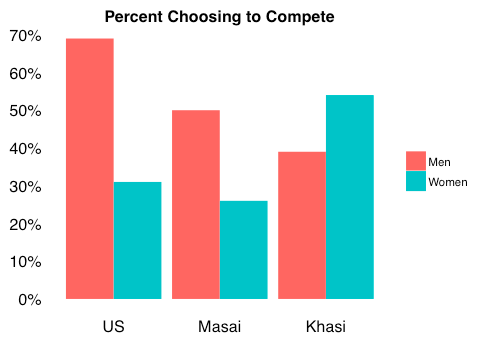 When we pulled up to the Masai village armed with cans of tennis balls, small toy buckets, and lots of money we found the villagers waiting for us. We told those that wanted to participate that they had the option of earning $1.50 (a full day’s earnings there) each time they successfully tossed the ball in the bucket after 10 tries versus $4.50 for each successful toss if they beat their randomly selected opponent.

What did we find? The Masai women had little interest in competing, with only 26% choosing that option. The Masai men? Fifty percent chose the competitive option. This was in line with rates in the U.S. (Before we went to Tanzania we ran a similar experiment and found that 69% of men wanted to compete versus just 30% of women.)

Our study suggests that given the right culture, women are as competitively inclined as men, and even more so in many situations. Competitiveness, then, is not only set by evolutionary forces that dictate that men are naturally more inclined than women (nature). The average woman will compete more than the average man if the right cultural incentives are in place (nurture).

Clearly, there was more to explore, we thought, and our book The Why Axis: Hidden Motives and the Undiscovered Economics of Everyday Life

details our adventures in learning about what motivates humans. We go to the ends of the earth to figure out the invaluable whys we face as a society.

Stay tuned for more Why Axis blog posts. And if you want to explore our world further, take the Why Axis Challenge: visit www.thewhyaxischallenge.com, post a photo of your copy of the book, and be entered to win prizes, including a meeting with Uri, John and Steve Levitt!

How is it nature? In case of Khasi, it's opposite, so it seems it's more nurture (culture) than nature. Would you elaborate why you think it's nurture?

It's only mildly opposite. In a system where you are testing 2 factors (Nature and nurture) it's a question of how much changed vs how much didn't change. Not saying that there was no nurture factor, but that the nature lack of change is there.

Other points come up as to how one defines patriarchal and matriarchal societies, where the US lies on the spectrum, given Masai and Khasi were chosen to be the extremes of that spectrum, and is this a good measure of that.
The chart given would be best arranged to have the US in the center, since it supposedly represents an non wholly Patriarchal system, not a wholly matriarchal one. It then would be clear that changes in the ratios are not correlated with how matriarchal a society is. Unless the authors are making the laughable claim that the US is more patriarchal than Masai.

One could using this same test check racial division in the US. Would African Americans, risk more to put a ball in a bucket as opposed to European Americans, and use that to show what the racial axis is in the US.

More curiouss about who earned more at the end of the day.....

The most comical part of this statement is the use of an exclamation point to emphasize a statement which isn't even true.

You seem to think that "like" means "within some range," but in my mind, the word like carries no inherent magnitude. So, the statement that the Khasi women are "like" US men is true in the sense that they both want to compete more than the opposite sex.

Interesting.
What about other factors? It seems premature to conclude that culture (nurture) is the only relevant difference between those two tribes.

Does the study consider whether there may be significant genetic differences between those groups?
How about local or environmental conditions (one tribe could be oriented towards agriculture, the other towards hunting)?

I've not read the book, but from the description in the post, I can see some possible problems with their interpretation.

First, when testing the US population, was the reward for success a sum as significant as $1.50 to a Masai woman? Certainly it would seem reasonable to take the chance of a fairly certain n * $1.50, rather than the smaller chance of 0 * $4.50, if the randomly-selected opponent is better at tossing.

Then following on this, consider the differing cultural importances of throwing stuff. The Masai man would likely be expert at throwing a spear, might well expect that expertise to carry over to tennis ball tossing, and so would expect to beat the opponent. Many US males, schooled on baseball, basketball, and so on might think the same way. But someone whose past experience does not include a lot of throwing practice would rationally choose not to compete against a probably-better opponent.

I agree with you James, but it seems obvious to me that you analyzed their conclusions from the view of a Economic anthropology. This kind of analysis will never be obvious to the authors. These two guys have PhD's in plain old econ, so the social and environmental factors (cultural ecology) in the decision making process of humans are typically completely overlooked by those trained/educated as they have been.

So why should we believe this is a fair test?

Eric - Within the western (patrilineal) world, researchers have studied gender differences in many countries. There are some variations of course, but men tend to be more competitive than women across quite a few areas of the US and Europe. That's interesting you mention Sweden! In fact, studies in Sweden show one of the smallest gender gaps, perhaps because of their culture that is not as biased against women succeeding in competitive settings. My own research finds that kids as young as the age of 4 in Chicago, IL also display a gap in competitiveness - boys are more competitive!

Based on the data in the post itself, the "US" in your column graph should be "Tanzania" - doesn't appear you ever actually give the rates for men and women in the US.

Those who think American women aren't, or can't be, as competitive as men should look at the horse showing world (overwhelmingly female), or endurance riding. The Tevis Cup is perhaps the premier endurance race in the US, and winners are equally divided between men and women.

Perhaps, as above, women are just making realistic judgements about their chances of winning a particular competition.

I do believe that competitive spirit has some role to play in the gender gap. When I was in university I noticed that women by and large opted for safe and easy programs. Many women in my chemistry program dropped out soon or changed majors, realizing it was too difficult and they weren't likely to succeed. Women tended towards safe programs like teaching, nursing, HR, feminist sociology, law, psychology, business, and stayed well away from engineering, chem, biology, finance, calculus, political science, medicine. Law and Psych used to be lucrative fields, but are now just as low paid as sociology major, probably because so many women are entering these fields and driving down the cost of labour.

The one HUGE problem with this study is it had to find the ONE matrilineal society of earth to do this study. Before you can compare the two, you first need to explain why 99% of all people on earth live in patrilineal societies.

Hi Phillip - so actually, one of the chapters in the Why Axis deals with essentially your question..why (and when) do we observe so few women entering into competitive environments in the first place!

If I'm offered the price of a sandwich to take part in a game, I'll be happy to gamble it for a bit of fun, even if i know I'm not very good. If I'm offered a days wages I might be more risk averse. This may be why the US participants appeared more competitive, if the prize money was constant.