Homosexuality Is Undercounted; So Is Homophobia 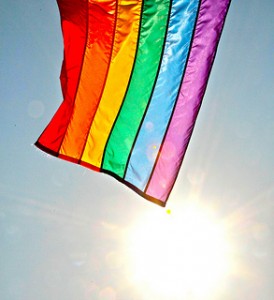 That is the argument made in a new paper (abstract; PDF) by Katherine Coffman, Lucas Coffman, and Keith Marzilli Ericson, entitled “The Size of the LGBT Population and the Magnitude of Anti-Gay Sentiment Are Substantially Underestimated”:

Measuring sexual orientation, behavior, and related opinions is difficult because responses are biased towards socially acceptable answers. We test whether measurements are biased even when responses are private and anonymous and use our results to identify sexuality-related norms and how they vary. We run an experiment on 2,516 U.S. participants. Participants were randomly assigned to either a “best practices method” that was computer-based and provides privacy and anonymity, or to a “veiled elicitation method” that further conceals individual responses. Answers in the veiled method preclude inference about any particular individual, but can be used to accurately estimate statistics about the population. Comparing the two methods shows sexuality-related questions receive biased responses even under current best practices, and, for many questions, the bias is substantial. The veiled method increased self-reports of non-heterosexual identity by 65% (p<0.05) and same-sex sexual experiences by 59% (p<0.01). The veiled method also increased the rates of anti-gay sentiment. Respondents were 67% more likely to express disapproval of an openly gay manager at work (p<0.01) and 71% more likely to say it is okay to discriminate against lesbian, gay, or bisexual individuals (p<0.01). The results show non-heterosexuality and anti-gay sentiment are substantially underestimated in existing surveys, and the privacy afforded by current best practices is not always sufficient to eliminate bias. Finally, our results identify two social norms: it is perceived as socially undesirable both to be open about being gay, and to be unaccepting of gay individuals.

Do the researchers have a vested interest in the outcome of their research? Also are any special interests funding the study?

Any quick Google search will show how difficult it is to measure "homosexuality" in America. The most public poll I saw recently was the 2013 Gallup "state-by-state" poll which estimated it at 3.5% of the US population as "openly LGBT". However, when the question in surveys is asked along the lines of people who "had at one point in their life experienced some form of homosexuality" the various results of studies seem to be more in the 7-10% range.

I can see this happening. People say they are OK with gay marriage, because they already have a lowered view of marriage over all. Its an easy way to defuse an accusation of homophobia.

I'm in a frustrated position. I disagree with gay marriage/ adult centered marriage, because it voids the expected responsibility of children. I live a community with high fatherless rates. I've known gay people, even as a young child. I also saw their married mother and father love them. Never in my life growing up, thought marriage to be homophobic. Here we are though.

I am and want to be respectful and accepting of differing relationships, but I find it so strange we can't acknowledge real differences.

Forgive me for being dense, but I don't understand what you're trying to say. Why are adoptive gay parents any worse parents than adoptive straight parents? Or are you against adoption, other forms of reproduction, etc?

But why should he child removed from all family to begin with? That includes aunts and uncles.

If you even do an adoption search on your states Department of Families & Childten , you will notice that state adoption workers fit that child's wants. Yes, a child in state custody can ask or even need a father in the home.

I had a teen ask for two gay dads, because didn't do well with women.

I had a grandfather raise his grandchildren, and they lived with the grandfather's sister.

Eventually children being raised by two women, will want a male role model/mentor. Think about some of the posts here on father absence?

There are many differing constellations. But for the child, if a child loses one or both parents its about them and their needs and not our wants.

I think there aren't actually that many people who are 100% homosexual or 100% heterosexual. I believe it's more like a spectrum, with perfectly homosexual people on one side and perfectly heterosexual people on the other, and the vast majority of people being somewhere in between (even if they have a strong preference for one or the other). From that perspective, it makes sense that most people would give the more "socially acceptable" answer to a question. They may even choose a relationship with a person in their "second preference" gender if they perceive the price of a relationship with a person less "sociallly acceptable" might be too high.

There was a piece on a Freakonomics column in 2005 that talked about "The Economy of Desire", and cases of people "changing" their sexual preference due to a fear of AIDS. Clearly a case of someone deciding that the price for their first sexual preference is too high (i.e. the risk of contracting a deadly virus), and so seeking to obtain their second sexual preference for a lower price. The point is, a person who has a "perfect preference" for one side or the other would not have a "second choice", because there would be zero attraction, and thus would be more likely to simply abstain from sex than have sex with a person for whom they had zero attraction.

I've heard the "we're all on a spectrum" argument before, but I have trouble understanding it.

For example, what exactly disqualifies a man who considers himself 100% heterosexual from actually being so? Are we counting random stray thoughts that involuntarily flit into one's consciousness once in a blue moon, or are we drawing the line just at explicit sexual activity?

Whatever criteria we decide on, do we start counting them in adolescence while the hormones are raging, or do we get a clean slate starting with adulthood?

FWIW, I've heard that the spectrum argument is a better description of the data for women than for men, whose distribution appears to be much more bimodal.

Reading the quoted section again, I'm getting the feeling that the researchers were biased. For example, they consider it "anti-gay" to express "disapproval of an openly gay manager at work." But what does being an openly gay manager at work entail? How would you find out that your manager was openly gay? Focusing for now on a hypothetical *male* gay manager (for the sake of keeping pronouns simple), I can think of several possibilities (flip the genders to apply to a lesbian manager if you prefer):

1. In the course of casual conversation, the manager reveals matter-of-factly that he is gay.
2. The manager and a gay partner are seen together engaging in unmistakeably romantic behavior (i.e. they're obviously more than buddies) by the employees during business hours, on a break, or just before or after business hours.
3. The manager expresses his sexual attraction to a male employee, coworker, superior, or customer.
4. The manager makes sexual advances towards a male employee, coworker, superior, or customer.

#1 is clearly not inappropriate, and someone with no anti-gay sentiment should have no problem with it. #2 could be inappropriate in some situations depending on the company's policies; you wouldn't necessarily have to be anti-gay to disapprove. #3 and #4 are inappropriate in just about any work environment. Even most pro-gay people would disapprove.

So, there are several methods for your manager at work to show that he is openly gay. Even assuming you are not anti-gay, half to three quarters of these methods could still warrant legitimate disapproval.

(Note: I did not include in my list "Manager uses cultural/behavioral clues to signal that he is gay," because I don't think that would be enough to qualify him as *openly* gay.)

I worked for a great manager. One day I discovered he was gay. This didn't bother me one way or the other. I never mentioned it to anyone either.

Only years later did I come to understand that HIS fear that I might have discovered his hidden homosexuality probably cost me any company advancement and I was always thereafter excluded from his circle of trust, meeting, gatherings. etc. I really should have artfully and quietly left the company.

It's the secret coverup that is so damaging.