How Does that Steak Frites Happen? 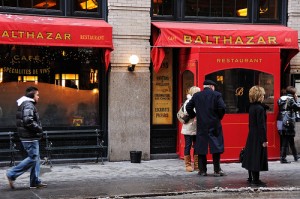 If you want to remind yourself what a really good magazine article can be, check out Willy Staley‘s N.Y. Times Magazine piece “22 Hours in Balthazar.” Balthazar is a SoHo restaurant that’s been around long enough to be an institution but is still good enough to inspire devotion from scene-setters, tourists, and locals alike. How?

That’s the question the article (and photographs) answer, in an elegant and fact-filled manner. For instance:

For now, everything is quiet at Balthazar. The last guests from the night before left just a few hours ago, and the nighttime porters are still finishing their thorough scrub of the restaurant. But the delivery trucks are starting to arrive all over again, idling on Crosby. Men in lifting belts wheel hand trucks stacked high with food from across the globe: 80 pounds of ground beef, 700 pounds of top butt, 175 shoulder tenders, 1 case of New York strips, all from the Midwest; 5 pounds of chicken livers, 6 cases of chicken bones, 120 chicken breast cutlets; 30 pounds of bacon; 300 littleneck clams, 110 pounds of mussels from Prince Edward Island, another 20 pounds from New Zealand, 50 trout, 25 pounds of U10 shrimp (fewer than 10 pieces per pound), 55 whole dorade, 3 cases of escargot, 360 Little Skookum oysters from Washington State, 3 whole tunas, 45 skates, 18 black sea bass, 2 bags of 100 to 120 whelks, 45 lobster culls. That’s just the fish and meat order.

When the first party sits down, a waitress takes their coffee order, turns around and heads straight to a computer terminal. Balthazar’s waiters — like waiters at most restaurants — spend a lot of time doing the seemingly duplicative work of punching orders they have already written down onto touch-screen computers. The point-of-sale terminals (or P.O.S., as the occasionally vexing machines are known) remove a certain degree of human error, but more important, they keep waiters on the floor, selling food and booze, turning tables as efficiently as possible. Food runners bring the plates to the dining room; busboys take them back to the dishwasher. There is a coffee runner whose sole task is to bring coffee from the barista to guests. For the most part, a waiter’s job is to manage the flow of plates around the restaurant. As Wendt explains, “Anything that we can do to keep the waiters on the floor more, we do.”

By the end of the day, the rotating staff of six cooks behind the line will have produced 111 steak frites, 90 French onion soups, 88 Balthazar bar steaks, 69 burgers, 68 omelets, 62 goat-cheese tarts, 56 chicken paillards, 51 chicken clubs, 48 seared salmon fillets, 46 heirloom-tomato salads, 45 sides of fries, 44 chicken-liver-and-foie-gras mousses, 43 duck confits, 40 grilled dorades, 39 steaks au poivre, 39 eggs Norwegian, 38 steak tartare appetizers (plus 16 entrees), 32 escargot, 32 moules frites, 29 grilled trout — the list, pulled from the P.O.S. terminals, goes on and on and on. The volume benefits the whole staff. Tonight, the waiters earn $345 in tips, the runners $207 and the busboys $172, which does not include the $5 an hour Balthazar pays them.

It is hard for me to say exactly why Staley’s article is so satisfying. It is fun, of course, to read about food, and it is always nice to have numbers in your journalism. If I had to name one “lesson” the article imparts, it would be a three-parter:

Thought economists hated planning?
I'm sure it would be better if they just let it be up to every individual staff member to do as they see fit

You bring up a good question, but this apparent contradiction has been resolved already.
See Coases's "The Nature of the Firm" and Peter Klein's lecture of the same name (here are the slides: http://mises.org/classroom/firm.pdf ).

What are firms? Why do they form? Why don't we just contract with each others on the open market every time a task needs doing?

The main reason is transaction costs.

Firms, which are organized by longer and more open contracts, improve on those transaction costs.
But just like any large-scale central planning, firms suffer from limits of knowledge and calculation problems (how to allocate resources absent internal market prices). So firms are constrained in size. You could say there is an optimal boundary.
Finding the sweet spot is possible because the firms are voluntary and subject to profits & losses as well as competitive pressure.

Some places of business may be very directive of their employees, some may let staff members do as they see fit, the consumer and employees decide which model is more successful in a case by case by dealing with this business or not.

Regarding your point, economists don't hate government planning, they think it works badly. They arrive at that conclusion by trying to understand how different systems work and analyzing trade-offs.
They do tend to develop a keen appreciation of the market, which laymen typically lack as we take the benefits of decentralized order for granted and it is harder to grasp than command and control.

Of course, quality doesn't happen by accident. It happens because of the consumer protection by government ;-)

Sarcasm aside, I often feel that people don't see that quality gets better because consumers want it, producers want their business, and if they don't they will lose it to competitors.
Those are only broad strokes, but they happen again and again. It's important to recognize the consumer protection that naturally regulates repeated and competitive business interactions.

Also, the article only points out the organizational complexity of one part of the production structure. But for a quality product and experience, you also need quality providers. You need to source good produces, buy aprons and uniforms, build a POS system, and so on.
It is fascinating to see this incredibly complex set of human interactions come together in such a simple experience as eating in a restaurant.

My lesson: Quality writing is its own reward; a gifted writer can make ANYTHING interesting. Writers must compete with everything else that may compel our attention; and attention is a finite commodity. I love it when someone makes me interested in something I had no interest in before. The three lessons that Mr. Dubner cites above apply to writing and would be a good credo for writers.

So which federal agency designed the food distribution system of NYC?