John List and Uri Gneezy have appeared on our blog many times. This guest post is part a series adapted from their new book The Why Axis: Hidden Motives and the Undiscovered Economics of Everyday Life. List also appeared in our recent podcast “How to Raise Money Without Killing a Kitten.”

The past 60 years in the U.S. has seen dramatic policy changes to the public-education system. The ‘50s, ‘60s, and ‘70s saw desegregation and affirmative action, and since the ‘80s there have been efforts to increase school funding, the introduction of voucher systems, and the creation of countless charter schools. In between we’ve seen efforts to reduce class sizes, introduce technology into classrooms, improve teacher credentialing, and a massive attempt to leave No Child Left Behind. 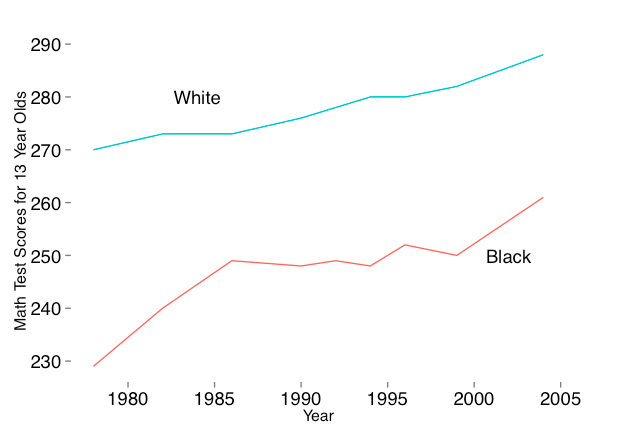 What do we have to show for all this? That’s hard to say. Even though many programs have a high price tag, they were never implemented with an eye towards assessment. The data we do have shows that not much has changed over the past 30 years. The figure attached shows how the racial achievement gap in test scores has persisted for white and black Americans since the late 1970s.

If you don’t like the breakdown by race, then consider that the high school dropout rate among high-income families in 1972 was 2% and in 2008 it was still at 2%. For low-income families, though? In 1972 it was 14% and in 2008 it was still at 9%. This sort of trend (or lack thereof) is manifested in dozens of measures of academic achievement, all of which suggest that the past 60 years of educational reform has very little to show for itself.

One of the reasons for our initial interest in educational reform was that we’re really good at testing ideas, but when we first started working with poorer urban schools we found that change was hard to effect. Rewarding parents, teachers, and students for higher grades, better study habits, and improvement on test scores all led to improvements that varied between modest and promising, but none were a silver bullet.

Around the same time a consensus was building in policy making and academic circles that early childhood interventions—like high quality pre-schools—were the most promising prospect for the next round of educational reforms. But testing the impact of an educational reform like that would be unthinkable. It would require millions of dollars, a huge team of teachers and researchers, a school district with an eye towards assessment willing to work with academics, and an army of researchers.

So that’s exactly what we did.

Just thirty miles south of Chicago we started working with the Chicago Heights school district (which is demographically and economically identical to Chicago) and we found donors willing to invest in our idea in Ken and Anne Griffin. Then we went ahead and built two pre-schools and a parent academy and randomized families into a control group, a pre-school program, or a program that would work with parents to improve their efforts in raising their children.

How’s it going? Well, the experiment is still in the early stages, but the results so far have been very promising. Students in the two preschools are now doing better than the average child across the nation. These results are astonishing, given the fact that Chicago Heights preschoolers lagged severely behind the average before we started the program.

The children whose parents are in the Parent Academy haven’t seen such stark growth in their test scores, but perhaps most promising is that the growth that did occur persists. Children in the pre-school program seem to have a nasty habit of forgetting what they learn over breaks like summer vacation.

But this test is still in its early stages. We have an eye towards the long-game here. We’ll be following the families of participants for the rest of their lives, with the goal of informing a whole new generation of educational reform.

If you want to explore our world further, take the Why Axis Challenge: visit www.thewhyaxischallenge.com, post a photo of your copy of The Why Axis, and be entered to win prizes, including a meeting with Uri, John and Freakonomics author Steven Levitt!