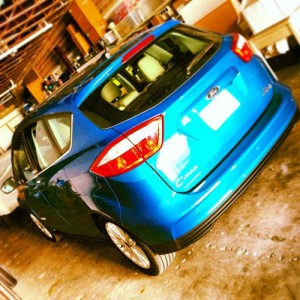 Sure enough, two weeks ago, two $550 checks arrived in the mail because Ford had dropped its official mileage estimate from 47mpg to 43mpg.  Ford calls the money a “goodwill payment.”

The company says that the $550 represents the cost difference between what a car owner will end up paying at the pump and what they were led to believe they would pay.

I’ve had a hard time replicating their estimate.  In this spreadsheet, I assume that the gas will cost $3.50/gallon (about the 2-year average) and that the car is driven 15,000 miles/year (the EPA’s average estimate) for 10 years and that C-Max owners can invest their goodwill payment at an interest rate of 5 percent.  With these assumptions, I estimate that the compensating payment should have been $802 per car – about 46 percent higher.

My estimate also crucially assumes that the true fuel efficiency is the revised Ford claim of 43 mpg.  If you’re getting the average gas mileage my cars are—34 mpg (which blinks cheekily on the dashboard every time I turn the car on) then the estimate jumps to almost $3,300.

Fuelly.com—a crowd-sourced fuel economy aggregator—reports that the most common mpg number for the C-Max is 40mpg, which would produce a compensating damage of $1,510.  Consumer Reports says 37 mpg, suggesting that $2,330 would be the appropriate compensation.  You can click here link to download an Excel spreadsheet that lets you play around with the assumptions and produce your own estimate.

At the end of the day, Ford might not be allowed to unilaterally decide what the fair amount of compensation is.  In June, the Judicial Panel on Multidistrict Litigation consolidated several suits against Ford into one class-action lawsuit in the Southern District of New York on behalf of all Ford hybrid owners.

But as far as I’m concerned, it’s not clear whether I was harmed by Ford’s representation with regard to my second purchase. Pitkin’s lawsuit back in December stated that he “reasonably believed that the C-MAX Hybrid would actually achieve 47 mpg when driving in the real world.”  But I bought my second C-Max after I already had some idea that I wouldn’t be getting 47 mpg.  So it’s not clear that I relied, to my detriment, on the misrepresented fuel efficiency.  Should I send Ford back the second check?