When a Fake Banksy Is a Real Banksy 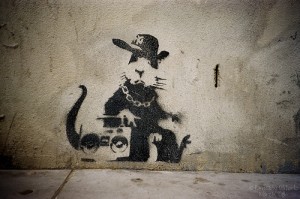 Many news outlets this week carried the story that Banksy, the celebrated British street artist, had set up an innocuous-looking booth near Central Park that offered original signed works for $60 each—despite their value being much closer to $60,000 apiece.  Even with this astounding discount, only a handful were sold—as this video, posted on Banksy’s website, shows:

What’s interesting to us is what this says about art and the role of copies. While copying is a huge concern in many art forms—especially music and film—in fine art, it is comparatively insignificant. In China, there are whole villages full of artisans devoted to copying the great masters of Western art, and certainly fakes and frauds are well known in the West as well. Yet there is not a thriving black market in Banksy knockoffs—or, for that matter, in the work of other major contemporary artists.  Why is that?

One might argue that original art somehow has a special quality because a brilliant artist made it with his or her hands. But since a lot of art is not really produced by the artist directly, but instead by assistants working on his or her guidance, it would seem that a very close copy of a valuable and aesthetically-interesting work should be almost as desirable as the real thing. (And we will put aside for the moment video and sound art, which, being digital, are perfectly suited to copying.) If one is simply buying art as an investment, provenance is clearly critical—and perhaps that is what drives a lot of the high-end art market. But for those who buy art for art’s sake (let’s assume those people exist), it is much less clear why it matters if the work is an original or a (very close) copy. This is especially true when originals can cost millions and copies a miniscule fraction.

In the case of Banksy’s booth, much of the media commentary presumed that the works were ignored by passersby because they were assumed to be fakes. Yet this only begs the question of why fakes are not desirable, given that very few of the people who walked by the booth—if any—could ever afford or would ever pay for the real thing. If you love Banksy’s work and style, $60 seems like an attractive price to pay for a well-executed fake.

One last point. An interesting thing about this story that hasn’t been addressed as much in the media commentary is that Walmart sells Bansky prints. And as you might expect from Walmart, the prices are very low. They can be had for even less than at the celebrated Banksy booth:  $57.99.