With So Much Food, Why Do So Many People Go Hungry? 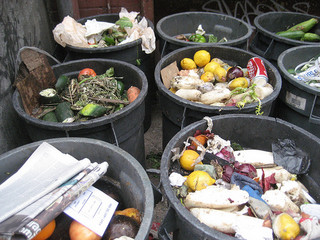 Writing for Foreign Policy, John Norris explores this question: why does hunger still kill “more people every year than HIV/AIDS, malaria and tuberculosis combined” when one-third of the food produced for human consumption is wasted?

Instead, much more of the food waste in the developing world comes further upstream in the production process.

Crops are inefficiently farmed with outdated tools, and often harvested early because farmers are under economic and climactic duress. To get meat, fruits, vegetables and fish to market in the developing world often means navigating lousy roads, using warehouses without proper refrigeration, facing greater vulnerability to pests, and any number of other factors that drive up spoilage and losses. A gallon of milk doesn’t last nearly as long when it is transported in a can that ends up sitting in the hot sun under a banana leaf.

It’s a different picture in the developed world:

But in Europe and North America the problem isn’t locusts, non-existent cold chains, or broken roads and bridges but how we perceive food and its use. For example, in the United State alone, grocery stores discard $10-15 billion in food that is close to its sell-by date or damaged. Yet, sell-by dates are something of a myth, and are designed to measure optimal quality rather than food safety. Most food is good well after the date by which many Americans view it as somehow becoming radioactive.

The pressure for “perfect looking” food also contributes to a great deal of discarded in more developed countries. Tristam Stuart, while researching the book Waste: Uncovering the Global Food Scandal

visited a British carrot farm where he found that 25-30 percent of all carrots produced there were either discarded or used as animal feed because of aesthetic defects — they weren’t straight or orange enough to pass what someone’s idealized view of the perfect Peter Cottontail carrot should look like.

I wonder if a food tax in developed countries is good or bad. One the one hand, it would reduce waste. But on the other, what's wrong with wasting something if you paid for it already? If I buy a toy, who cares what I do with it? So what's wrong with me buying food and wasting it? Obviously, if we could send all the wasted food to the poorer countries, it would be a different story.

On discarding a food its interesting to add that a lot of international students in Denmark practice the somewhat socially unaccepted practice of "dumpster diving" - visiting dumpsters behind alrge grocery stores after store closing hours and collecting food that is discarded usually a day or two before the expiry date.

Several questions - why isn't there a system to use/distribute this food more efficiently that dumping it into dumpster?
Why do the stores discard food days before its expiry date instead of selling them at steep discounts?
Why is dumpster diving not a socially accepted activity in much of the world?

"Why do the stores discard food days before its expiry date instead of selling them at steep discounts?"

If they did that, wouldn't a lot of people buy the discounted food instead of the full price food? Another possibility is that the food distributors who stock the shelves pull and discard the not-quite-out-of-date food in favor of the new supplies they just brought with them on the truck.

(I'm not trying to justify their practices, just understand them.)

The answer may lie in the litigious nature of much of the developed world.
I would happily buy food at half price the day after the sell by date. But they are not even allowed to serve it up to the homeless or inmates.

I'm not familiar with every developed country's judicial system, but it seems to me that the US leads the way in this sort of litigation. I don't think this would be such a problem elsewhere.

"Why do the stores discard food days before its expiry date instead of selling them at steep discounts?"

Or just donating the food to a local foodbank or shelter...? I bet places that could use the food would even send a truck to pick up and would happily load the truck themselves...

Many grocery stores do donate about-to-expire food to food banks, etc. Ask your local grocery, and they probably do. They're generally ad-hoc efforts, and like many ad-hoc efforts the results are inconsistent.

In the developing world food, like most things, is a logistics problem. That's what the government is supposed to be for, creating societal goods like infrastructure.

Speaking of infrastructure, NGOs are really recruiting from the wrong source. If they want people that get stuff done they shouldn't look in universities - universities are the antithesis of "getting things done." Look in the Real World - there are people out there who would build infrastructure for free, if you'd let them. Transporting stuff around Africa isn't hard, if you think about it the right way. Neither is building infrastructure.

You are accusing NGOs of wanting to get things done and that's just not the case. If the problem is solved, they'll have to find something else to do with their liberal arts degree. Have you seen the economy lately?

"With So Much Food, Why Do So Many People Go Hungry?"

Other statements with similar logic:

I don't know who publishes here under the name "freakonomics" but my bet is interns that did not yet learn economics.

Localized extreme surpluses and localized shortages don't balance out if the locales are too far apart for the balance to occur in a timely fashion.

If food could be distributed as efficiently as electricity, less would be wasted.

Would reducing waste in the developed world make any difference? The quoted reference notes that transportation to market is a huge factor in loss/waste in the third world. What it doesn't mention is local powers that want rivals to starve, and western environmentalists who don't care how many people starve as long as no pesticides or GMOs are used, and western fads like organic farming and locavorism are imposed. Attacking those problems would reduce and maybe eliminate starvation. We could finish the job with infrastructure aid, and more focus on developing large-scale commercial agriculture. Much if not most of the starvation problem is essentially political; we could eliminate starvation if eliminating starvation was our actual goal.

Maybe what we need in the developing world is to reform the laws around expiry dates. Perhaps we need to differentiate between "best flavor by" (the current typical dates) and the "may be unsafe after" dates (what you see on raw meat and fluid milk), and require manufacturers to provide the second separately, if they choose to provide the first—and to have that figure based on some sort of real facts, not just "gee, it'd be nice if we made everyone throw away everything once a year".

It might interest you to note that the UK has recently done away with the sell by date, which was the earliest of the dates on a pack. Be interesting to see the results.

Pretty simple formula, if you don't work you don't eat. Lack of employment leads to a host of problems for an individual especially in countries without social safety nets. Farmers don't work for free even in impoverished countries.