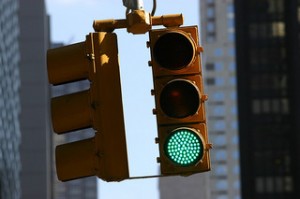 That is what the headline of this fascinating article says. Here is a quote from the news report:

In lay language,” [Samah] El-Tantawy said in a U of T news release, “the [traffic lights] act as a team of players cooperating to win a game — much like players in a soccer match, where each player endeavors to score, but at the same time considers the ultimate goal of the entire team which is winning the match.

According to the article, travel times were reduced by 26 percent, which is fantastic, and which is what matters.

This doesn’t, however, seem to have much to do with game theory. Game theory is about one of two things: strategic behavior or finding sustainable equilbria. But the traffic lights don’t care about their own private utility.  There is no sense in which they are actors at all, as traffic lights just do what you tell them to do.  In economic terms, there is a central planner who sets the rules which the traffic lights obey. This new scheme provides a new and better set of rules (which, again, I emphasize is great), but I don’t think game theory should get the credit!

What if you considered the utility of any particular traffic light to be inversely related to how long all vehicles wait at that light?

"For those of us with a 2-hour commute, image the joy of that being consistently reduced to just an hour and a half! What would you do with an extra hour in your day?"

For starters, I'd spend that hour finding a place closer to my work to live.

Rapidly running out of hours to be a whole human.

Me, I'd spend the time finding work closer to where I choose to live. Of course it's a moot point for me, since I've got my daily commute distance down to about 20 feet :-)

From the news release it looks like they set up each individual traffic light as an independent actor with the ability to make decisions about light timing and a private utility in seeking to maximize local traffic flow. The actors can communicate with nearby actors to determine an optimal individual strategy utilizing game theory in the decision making process. Contrary to your analogy, this system actually removes the central planning and gives each individual traffic light the freedom to make decisions based upon real time data. Game theory is utilized in programming the decision making process into the lights.

It’s not competitive game theory like most of us are used to, but it is Cooperative Game Theory. The individual actors (lights) can directly influence the outcomes at their own intersections but their goal is not just to maximize flow at their own intersections, but also at neighboring intersections. A purely self-interested traffic light might make a move that gets a few more cars through, but causes a jam at the next block.
It does involve game theory, but it’s really more of a story about distributed, parallel processing being more effective than central, serial processing.

While you can say that the lights aren't playing a 'game' since they just follow rules, game theory gets the credit for informing those rules! The central planner was obviously using game theory - it is as if each light is playing to maximize the utility of drivers in its lane of traffic. Those drivers, if they had control of the light, would deviate for personal gains at the loss of the whole. The lights' rules are set to maximize the whole rather than just their lane of traffic, hence inefficient nash equilibria are avoided.
Game theory FTW

Gussy it up however you want, Trebek! What matters is does it work??

I have been doing some research on this topic. The traffic light system is called M A R L I N, which stands for Multi-Agent Reinforcement Learning Integrated Network of Adaptive Traffic Signal Controllers.

Here's what I understood: traffic is modeled as a stochastic game (Markov game) in which each traffic light chooses a state depending on the state of other lights. It is possible for the traffic lights to end up in a kind of Prisoner's dilemma if they are optimising over different intersections. The MARLIN system somehow uses reinforcement learning to get the lights to coordinate to a better joint outcome.

Here is a link to a presentation on MARLIN with some more details: http://www.civil.engineering.utoronto.ca/Assets/Civil+Engineering+Digital+Assets/studentlife/UT-ITE/2011-2012+Presentations/Presentation--Samah-ElTantawy--2011-11-04.pdf

ANY system that reduces the wait time is desirable IMO.

Changing lights to red/yellow blinkers during off-hours is a HUGE fix which is implemented much too infrequently.