On Suicide and Guns 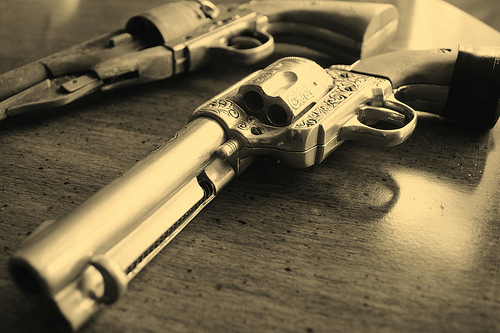 We’ve blogged quite a bit about suicide and put out an hour-long podcast on the topic. The podcast featured an interview with Matt Wray, a sociologist who studies America’s “suicide belt.” He described the type of American most likely to kill himself:

WRAY: So, yes the Inner Mountain West is a place that is disproportionately populated by middle-aged and aging white men, single, unattached, often unemployed with access to guns. This may turn out to be a very powerful explanation and explain a lot of the variance that we observe. It’s backed up by the fact that the one state that is on par with what we see in the suicide belt is Alaska.

DUBNER: All right, so now you can get a picture of the American who’s most likely to kill himself: an older, white male who owns a gun, probably unmarried and maybe unemployed, living somewhere out west, probably in a rural area.

A new paper (gated) by Alex Tabarrok and Justin Briggs further examines the connection between firearms and suicides. Tabarrok summarizes their findings at Marginal Revolution:

Using a variety of techniques and data we estimate that a 1% increase in the household gun ownership rate leads to a .5 to .9% increase in suicides.* (n.b. slight change in language from earlier version for clarity.)

Our econometric results are consistent with the literature on suicide which finds that suicide is often a rash and impulsive decision–most people who try but fail to commit suicide do not recommit at a later date–as a result, small increases in the cost of suicide can dissuade people long enough so that they never do commit suicide.

yeah but the suicide rates themselves remain constant, it's only the methods that change

"When gun ownership decreases we see a big decrease in gun-suicide and a substantial but less than fully compensating increase in non-gun suicide so a net decrease in the number of suicides."

Do the difference between the decrease on gun-suicide and the increase on non-gun suicide shows as attempted but failed suicides?

Isn't the "success" rate of gun related suicides higher than other methods since it is the more foolproof method? So isn't that kind of obvious connection to make?

I know someone who attempted suicide by gun, and lived to deal with the brain damage.

There are some methods that have higher completion rates. There are many other methods that leave less mess and/or less expense for survivors and the rest of society. However, most of those require a little bit of planning, which is something that the average suicidal person doesn't engage in.

Anecdotes are just that - anecdotes. There are also people who have survived their parachute not opening, thanks to falling at the right angle into a snow-filled ravine. That doesn't mean it's likely to happen.

I was surprised that middle-aged men were over-represented among suicide victims in the US. Here in Ireland younger men from 20s to early 40s are the highest-risk group.

I seem to remember reading that in most countries men are more likely to commit suicide than women, but that there are a few exceptions. Might be interesting to look into this. I gather alcohol consumption is a factor in many suicides, perhaps younger men in Ireland are more likely to be consuming alcohol during vulnerable moments?

Individual careers often have higher risks connected to access to means of death: veterinarians have high suicide rates here, supposedly because they have access to barbiturates, are emotionally familiar with the idea of euthanasia through putting sick animals down, and some lead quite solitary lives.

I have a sneaking suspicion the type of older white male who owns a gun might also have an above average resistance to using antidepressants, or to seeking help for depression at all. Could that be a third factor?

How do you rationalize the fact that there are few gun in private citizens hands in Japan and yet the suicide rate is almost twice as high as in the U.S.?

If access to guns was the only determinant of suicide rates this would be important. However it is not, and Japan has higher suicide rates for its own cultural, economic or perhaps environmental reasons. How would Japan's suicide rate be if there was greater access to firearms there?

If guns cause suicide, then why does the UK have nearly the same suicide rate as the US?

See my post above about Japan. Access to firearms is only one of many determinants of suicide rates.

The suicide and gun ownership correlation is so weak that it entirely disappears once you start to compare on an international basis.

Gun control advocates constantly compare US and UK homicide rates as evidence of gun control working, yet the UK and US suicide rate is practically identical.

Socioeconomically speaking, the US is far worse than the UK. The US has far more poverty, a higher wealth inequality rate, higher unemployment rate among other things.

But if more guns = more suicides, why is it that a gun saturated nation like Switzerland has a suicide rate of 11.1? Which is far lower than many gun restrictive countries. Half of Swiss households own any sort of gun.

Canada and Australia. These countries implemented restrictive gun control, gun suicides went down, but methods such as hanging rose. Thus the general suicide rate for both of these countries did NOT decline.

Here are some studies:

Pardon me if I have read this incorrectly, but the article seems inconsistant to me. In the paper, the authors suggest that when guns are unavailible, non-gun suicides occur more often. Then, a few paragraphs later they discuss how raising the price of guns would prevent or put off suicides. Isn't that contradicting? If the price of guns are raised then not as many people will buy guns,as they believe, but wouldn't that just mean the suicidal-almost-gun-owner would find another way to follow through?
Just a thought

"In the paper, the authors suggest that when guns are unavailible, non-gun suicides occur more often. Then, a few paragraphs later they discuss how raising the price of guns would prevent or put off suicides. Isn’t that contradicting?"

No, because they say that non-gun suicides do not increase in number as much as gun suicides decrease, meaning there is a net reduction.

I really question the goal of reducing suicide at all. If people feel that they would be better off dead now, rather than dead later, then they should have the freedom to do so successfully without judgment or stigma. Society imposes false values on the suicide option. It can be a perfectly legitimate and rational decision.

So the question of how gun access affects suicide rates and modalities is, to me, irrelevant. The question is why we want to meddle in this choice at all, to impose our collective will via suicide prevention efforts in order to prevent others from exercising a choice of their own.

I don't expect this comment to be popular, which only illustrates my point.

Discussion of modalities is moot because there is no societal interest in reducing suicides.

But here is some really useful data. Modalities for suicide seem to differ based on many factors, but one very frequent and far more important link is alcohol. Individuals with alcohol dependence have a profoundly greater suicide risk than the general population (see link below).

Why is this more important than guns, hanging, drug overdose, etc? Because alcoholism is a good PREDICTOR of suicide. Guns, hanging, and other methods only reveal what ALREADY happened. Treating alcoholism has tremendous economic benefits to society; and, for those who care, it could reduce suicides more than data tinkering around the edges of suicide modalities, which are subject to shifting and substituting, and are frankly beyond the scope of any realistic or cost-effective intervention anyway.