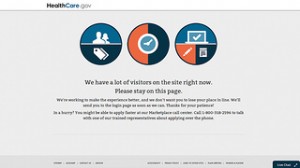 The rest of the world likes to say that everything in America is big: the cars, the CO2 emissions, the buildings, even the hamburgers. The farce at the U.S. government’s website for enrollment in health insurance under the so-called Affordable Care Act (ACA) shows that we also supersize our transaction costs.

In a news report from NPR, Alaska Public Radio Network, and Kaiser Health News, even a computer programmer who had also created websites needed many attempts over many weeks to use the site to enroll for health insurance. And she still awaits the enrollment confirmation (with luck in the new year, said the radio version of the report). If it arrives, she gets affordable health insurance ($110 instead of $1200 per month), but then still has the joy of dealing with an insurance company and the claim paperwork.

This waste is not inevitable. I lived for 12 years of my life in England. The first few years were as a baby, but during the 9 years that I remember, I spent 1 hour dealing with health forms — mostly to register myself at a local medical practice. Even my medical records from infancy were still on file two decades later (though a decade later they burned up in a warehouse fire).

The Alaskan in the news story probably spent that hour on her first attempt to register for health insurance. In contrast, the U.K.’s National Health Service, by insuring everyone under one roof, eliminates these issues.

In a 2010 comparison of health care in Australia, Canada, Germany, the Netherlands, New Zealand, the United Kingdom, and the United States, the U.K. system was rated as the most efficient, and the U.S. system the least efficient. Some of the gap lies in our absurd transaction costs.