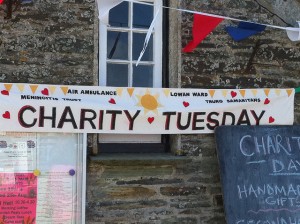 I like Indian food more than sushi. And I like sushi more than Italian food. When going out for dinner and choosing which to eat, does this mean I always choose Indian? Of course not. I’d tire of Indian food.

On my savings account, I like earning 3% interest more than 2%. And I like earning 2% more than 1%. Suppose three banks offer accounts identical except for the interest rate: would I always choose the 3% account? Or might I say, “Hey, 3% is boring, I think I’ll try 2%?” Of course not. I’d stick with the bigger payoff.

Yet when it comes to charitable giving, most people spread their money around. Why is this? And is it an effective strategy for helping people, or just a way to make ourselves feel good?

I look at this three ways:

First, we might think that even the best charity can absorb and wisely spend only so much money — that the impact of our next dollar is lower than the impact of the first. So we give to several worthy causes. And this may be the prudent approach for huge givers like Bill & Melinda Gates, Mark Zuckerberg, and Warren Buffett — but most of us don’t have to worry about that.

Second, it’s possible that we think of giving as a form of investing and we want to diversify risk. Maybe we’re willing to take a lower average expected return on “investment” in exchange for greater confidence that our donations will, on average, make an impact, or that at least one investment will. Surely this can be driven by genuine altruism (and perhaps a bit of risk aversion): we really want to make sure that we’re helping.

But I suspect this is all mere rationalization, and that, we really divide our charity for a third reason: giving is more like consumption than like investment. We give because it makes us feel good.

(And, for the math-geeks among us, the warm fuzzies we get from giving isn’t linear with the amount given —  we get more warm fuzzies from splitting our gift between two charities, or among three or four or more.)

But there are real costs to this approach: It’s inefficient, and we might not be giving to the most effective programs.

We also sometimes give because our neighbor, friend, or work colleague pressured us to give. And so we did, to make them happy, or to win a favor from them in the future.

Either way, this means we are giving not due to altruism, but for ourselves.

If we think of ourselves as savvy investors in humanity, looking for the highest return on our charitable “investment” — that is, the most help for the best charities — where should we put our money?  Here are some ideas. (Fair warning: researchers at the non-profit organization I founded, Innovations for Poverty Action (IPA), conducted scientific evaluations of these organizations as part of its mission to discover and promote effective solutions to global poverty.)

The non-profit Pratham learned (and showed others) that poor children who were behind in school could be brought up to speed using a decidedly low-tech approach: giving unemployed women in the village a crash course in teaching and turning them into volunteer tutors.

The organization Seva Mandir knew that vaccinations are incredibly important in the developing world, but that it can be difficult to get people to come to vaccination drives. They showed that giving out a bag of lentils as an incentive to mothers who bring their children not only boosted vaccination rates, but that the increased coverage lowered total costs, even taking the cost of the lentils into account.

A brand new addition to the list is Evidence Action, which was recently founded as a spinoff from Innovations for Poverty Action and is dedicated to scaling up programs backed by evidence of their effectiveness — such as those providing communal chlorine dispensers for treating water and inexpensive anti-parasite pills for children in the developing world.

Against Malaria Foundation (AMF) distributes bed nets to help protect children and pregnant mothers from malaria. There once were debates about whether bed nets should be sold or given out for free. But careful scientific tests by IPA researchers have shown that giving them away expands coverage effectively, with no evidence of the feared “sunk cost” effect, in which people do not use items acquired for free.

Two microfinance charities stand out for their innovative work to improve the microfinance model, (which in my view has not sufficiently proven itself to merit charitable donations, particularly since it can attract investment capital) — Freedom from Hunger and Kiva Labs. These groups are working hard to innovate, and to document their results scientifically. Freedom from Hunger helps people learn to save, so they don’t need loans and can independently generate the means to invest in their own futures. Kiva Labs helps promote and finance more flexible lending products.

It can be hard to sift through competing claims of charities — this is why I believe in setting up objective tests to help organizations know what works and help donors know what to support.