The Fight to Eradicate Polio 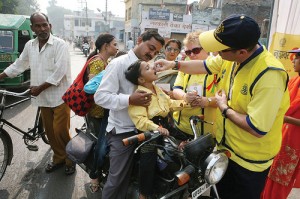 In 2012, there were only 223 cases of polio in the world, as compared to 350,000 in 1988.  An excellent, thoroughly reported new article in Wired, by the Kabul-based Matthieu Aikins, explores what it will take to completely eradicate the disease — and it will take a lot:

The global campaign, decades in the making, has come down to this: an all-out, very expensive effort to eliminate the last few problem areas in some of the most troubled and undeveloped parts of the final three countries where polio is endemic: Afghanistan, Pakistan, and Nigeria. It is one of the most expensive and ambitious global health initiatives today, and it is tantalizingly close to victory. There are now just a few hundred cases of paralysis per year worldwide, down from roughly 350,000 when the campaign started in 1988. But going the final inch will require more than just good science and vast amounts of money—it will require a tremendous force of collective will.

In addition to exploring the science, economics, and politics of polio eradication, Aikins also illustrates what the on-the-ground campaign looks like in places like Jalalabad and Torkham, a large crossing point between Afghanistan and Pakistan.  While the polio eradication campaign has largely gained the support of the Taliban in Afghanistan, the same is not true in Pakistan:

Attacks on polio workers there have continued—a vaccination center in Peshawar was bombed in October, killing two people and wounding at least a dozen others. The most worrisome locus of all is North Waziristan, a region in Pakistan’s tribal areas where the Taliban commander, Hafiz Gul Bahadur, has forbidden any polio vaccination campaigns since 2012, demanding that the U.S. end its drone campaign in Pakistan before he relents. Today, researchers estimate that more than 160,000 children in North Waziristan have gone unvaccinated in the past year alone. The inevitable outbreak there is already under way and has spread beyond the province; the Federally Administered Tribal Areas (which include Waziristan) and the neighboring province of Khyber Pakhtunkhwa have had 38 paralysis cases in 2013, or nearly 90 percent of Pakistan’s cases for the year. If children there can’t be vaccinated, it will be almost impossible to stop the virus from spreading into Afghanistan and neighboring areas—and perhaps to other parts of the world.