A Frog in the Salad 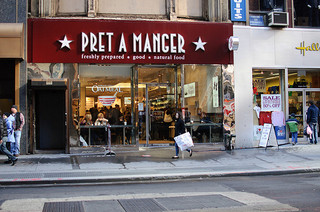 Two years ago, we did a podcast on a dining experience Stephen Dubner had at Le Pain Quotidien. The podcast was called “Mouse in the Salad,” so you can probably guess what happened. And it looks like animals in salads are all the rage lately — The Atlantic Wire reports that a Wall Street Journal editor recently found a frog in her Pret A Manger nicoise salad. The reason given by Pret was similar to the one given by Le Pain Quotidien CEO Vincent Herbert in our podcast: it’s organic. From WSJ.com:

Ellen Roggemann, vice president of brand marketing for the company in the U.S., said that Pret A Manger’s goal of selling “handmade natural food,” often made from organic ingredients, could be partially to blame for the frog in the salad.

“We don’t use any pesticides with our greens and they go through multiple washing cycles,” she said. “An unfortunate piece of organic matter has made its way through,” she added.

In our podcast, Dubner’s friend James Altucher had an interesting perspective on how things like this happen:

ALTUCHER: This is a growth issue, because too many things went wrong. So, each one thing has a low probability. So a mouse gets into an open salad bag that happens to be lying around. That’s inappropriate. The mouse dies there. So, I don’t know, was it there overnight? The guy takes his hand in and puts it in a bowl and didn’t see the mouse. The waitress or waiter brings the mouse over and didn’t notice it. So, four or five things went wrong. Maybe the salad was delivered with the mouse in it to the store to begin with? So, we don’t know where it went wrong. This is a typical thing that could happen, not this exact thing, but this aspect of things breaking down, multiple things breaking down happens when you’re doing that regional-to-national surge of a business.

The Wall Street Journal editor was compensated with a refund and a free lunch voucher. Whether she’ll return and use that free voucher is another question altogether.

Pesticides aren't the problem. There is a breakdown in the washing/screen process that is likely automated.

I listened to the "Mouse in the Salad" podcast recently and didn't buy Pain Quotidien's claim that the mouse was there because of the produce being organic. I would imagine it was more likely that the kitchen had mice and one found its way into the bag of lettuce. In the face of quality control issues, companies would rather find a way to embrace their original message/brand ("we're organic") rather than say "Our kitchen isn't as clean as it should be" or "Our staff is undertrained and careless". It's harder to turn a dirty kitchen into a positive than to redirect consumers to the idea that the produce is organic. However, I did think that the president of Pain Quotidien was pretty open and aware in his interview and thought that it was a good move on his part to be on the show. And I loved the podcast itself.

The question is, was it a raw, unboned, real, dead frog?

Remember that horrible Carnival Cruise that turned into a floating septic tank of raw sewage? The company's remedy, as here, was a coupon for a return engagement. And people actually sai they'd use it. "How can you turn down a free cruise" said one guy on the news. :)

What's worse than finding a frog our mouse in your dinner? Not finding it.

… or finding half of it.

I can see finding small insects from the produce's natural environment, or even a roach, but a frog or a mouse? I agree; better cleaning practises are in order. The meal, and those of any guest offened, should be free.