Is Your City in the Right Place? 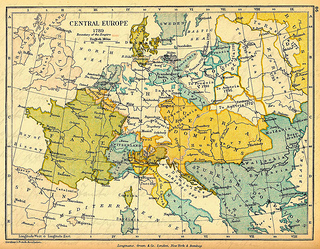 An article on VOX by Guy Michaels and Ferdinand Rauch looks at whether towns in France and Britain are “poorly located.” The authors explain that being in the wrong place — with poor access to world markets and resources, or vulnerability to natural disasters — has dire economic and social consequences. Examining historical evidence from the Roman Empire and the Middle Ages, they found that towns in France stayed put, while those in Britain moved:

Medieval towns in France were much more likely to be located near Roman towns than their British counterparts (Figure 1). These differences in persistence are still visible today: only three of the 20 largest cities in Britain are located near the site of Roman towns, compared to 16 in France. This finding suggests that the British urban network shifted towards newly advantageous locations, while French towns remained in locations, which may have become obsolete.

These findings, and the high costs of building and maintaining canals, suggest that access to water transportation was invaluable. The conclusion we draw is that many French towns were stuck in the wrong places for many centuries. They could not take advantage of the new transportation technologies since they had poor coastal access; they were in locations that were designed to fit with the demands of Roman times and not the considerations of the Middle Ages.

To be fair, lots of what we find in freakonomics wouldn't exist if seemingly obvious theories/premises weren't investigated. A lot of the time they will turn out as though, but other times we will discover something we did not expect, or as they call it here "the hidden side of everything"

I'm afraid that whoever wrote the introductory text for this post has mischaracterized the novelty of the article and the importance of its conclusions. There's nothing earth-shaking here.

Anyone who's studied them-- historian, geographer, urbanist, architect, planner, etc.-- knows that towns and cities don't occur randomly in the landscape. This article (and the work on which it's based-- largely behind a pay-wall) investigates the evolutionary tendencies in an extremely narrow selection of settlements. The argument proceeds from a generally-understood characteristic of cities that the Freakonomics introduction implies-- or the reader is to infer-- is the article's (novel) conclusion.

You're correct that there's no reason to believe it's bogus work; it's just not very interesting unless one is a trained economist.

A few years back, Melinda Beck proposed there should be two new science journals: "Huh?" and "Duh!"

While I'm not saying it's bad research, Michaels/Rauch's article might well have been published in a third journal: "Meh!"

They are crazy, those Romans!

Seems to ignore history. Much of Britain was never really colonized by the Romans in the same way that France was. Native uprisings and attacks from the unconquered areas were frequent, so the Roman settlements were more likely to be located with an eye to defense.

So this is why England was able to build a world-spanning naval empire, while the best the French tried was a winter invasion of Russia.

In point of fact, France DID have a world-spanning naval empire, which was in the same league as Britain's prior to the Revolution. That and the ensuing Napoleonic Era, plus the misfortune of being located next to Germany, seems a more reasonable explanation for France's post-1800 decline than the location of its cities.

Surprised by the negative comments this article is getting, get seems interesting and novel to me. Why the difference between France and Britain? Strange and intriguing.

I also wonder if it's important that cities can be allowed to die when they become less relevant. There has been a lot of attention given to the troubles of Detroit, for example, but perhaps the country as a whole can be more dynamic when individuals abandon areas that are no longer attractive and instead inject their energies into newer, thriving regions instead.

Just taking my usual ADD shot here without reading the backup, but could it be that since Britain was on the hostile frontier of the Roman Empiure, those outposts were more like forts, and perhpas chosen for different reasons like isolation, defensibility....non-commerce? Whereas France was a marketplace for the Roman Empire and things could fall into the natural economic geographies