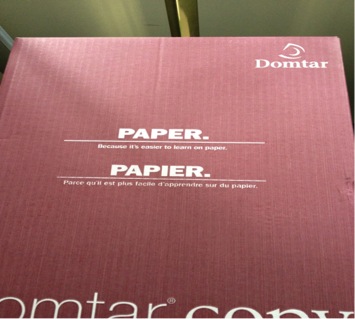 What do you do if your product is obsolete and demand is shifting rapidly leftward?  The paper industry has a problem: digitization and environmental concerns.  To prevent further declines, the brand of paper our department uses has created a clever slogan (see the picture) — “Because it’s easier to learn on paper.”  I wonder what other examples there are of businesses using the market to maintain the demand for a product that is being displaced by technological change (as opposed to obtaining government protection, the usual route in these instances)?

Not a business per say, but any campaign (formal or informal) to create warm fuzzy's regarding ANY teacher and their value in the classroom.

I say that as a high school teacher who believes the profession must innovate or die.

We used to use a paper firm that had the slogan: "Paper for the digital world".

http://m.youtube.com/watch?v=6HeRBiZnhaY - This ad actually has a point :-) and paper has a great future.

But is it easier to learn on paper?

It makes one respect how hard it must be for the Amish to sustain their culture.

There is more than a little coercion in maintaining that culture.
These may interest.

"The Amish: Shunned" (video documentary)
http://www.pbs.org/wgbh/americanexperience/films/shunned/
' "The Amish: Shunned" follows seven people who have chosen to leave their closed and tightly-knit communities for the outside world, knowing they can never return. Each has paid deeply for their decision. Estranged from loved ones, these former Amish find themselves struggling to make their way in modern America.'

To Obey or to Stray: That is the Question
Saloma Furlong
February 04, 2014 (blog post)
http://www.pbs.org/wgbh/americanexperience/blog/2014/02/04/obey-or-stray-question/

'The answer to these questions was clarified for me when an Amish man in “Shunned” talks about obedience to church rules. He says, “You lose obedience, you lose the church. Amen.” '

Saloma Miller Furlong is author of two books,
Why I Left the Amish
and
Bonnet Strings: An Amish Woman’s Ties to Two Worlds.

As far as the environment is concerned, if the worry is about CO2, using more paper would be better. Young trees are faster growing and absorb more CO2 than old-growth forests. An increase in paper demand would cause more trees to be planted. When waste paper is buried in a landfill, the carbon is "sequestered." Besides that, well-managed forests owned by paper companies are excellent habitat for wildlife.

High street travel agency - used to be a one stop shop for holidays, now reducing economies of scale, becoming increasingly reliant on an ever decreasing market of those untrusting/unknowing of the web. What have they got to cling on to? Possibly better performance coming still from foreign currency margins they dont 'yet' have to compete on directly with online providers - due to understandable widespread consumer uncertainty of having lots of cash delivered on time/at all in the mail (at least in the UK anyway) - albeit still surely a decreasing market.

I think that's a good example.

"The cloud is forever, paper is as long as you want it to be."

"Paper: just a shredder away from freedom."

"Paper is its own encryption."

as a teacher, I must say, "It is easier to GRADE on paper." probably not much of a slogan, but it's the truth.

I play in a local community band, and every season we have this problem of distributing the music to our players: each time we collect the previous folder of music, sort them, re-file them, then create new folders with the new season's 40+ scores and hand these out at the next rehearsal. It is chaotic: when the season ends, some folders come back, a few follow perhaps weeks later, some never return, and handing them out, often there is new music not yet ready that has to be handed out at some later point ... anyway, long story short, the idea was floated, "Why not use tablets?"

Tablets are problematic. Rain kills them, and we play outdoors. They cannot be read in the direct sunlight, they won't clip to a stand, if the stand blows over, the tablet is destroyed, and with the current technology the tablets are far to slow to skip pages at an allegro pace, and you can't make a copy of page 3 to clip beside an open folder and avoid page turns entirely. Tablets just aren't an option.

but ... imagine ... what if we had a kind of magical erasable paper, we put the current music on the pages, then ask for them back, wipe them clean, reprogram with new pages and hand them out again.

then it occurred to me, we already have this technology!

we put the current music on to blank laserprinted paper
... and the "erase device" is called "the recycle box"!

Paper (or papyrus) has been a permanent storage medium for several thousand years.