The Undercover Economist Is Back 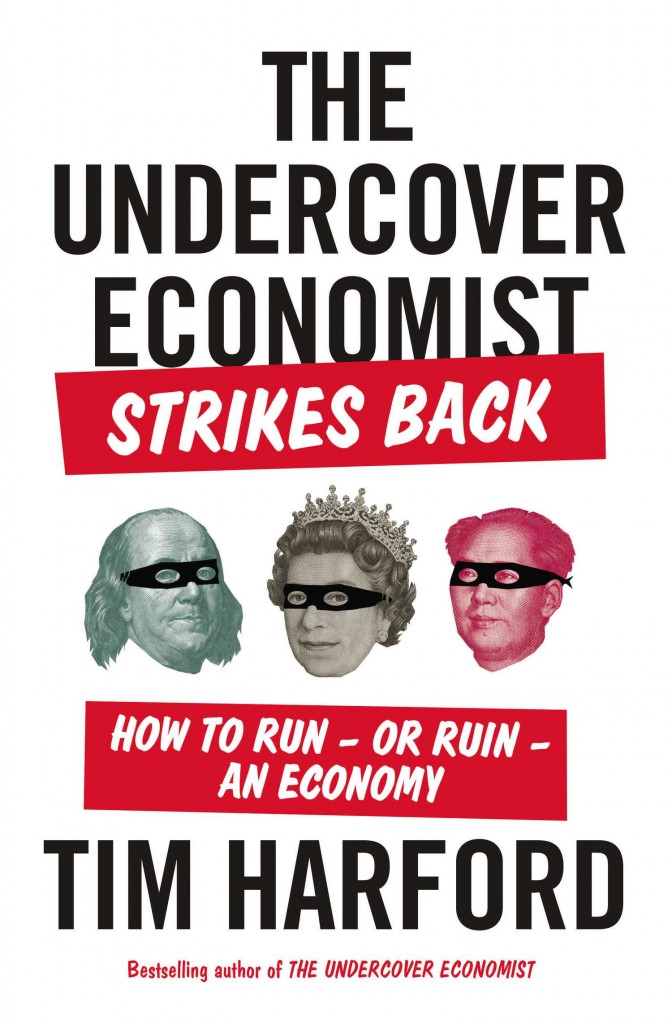 Tim Harford, who writes the Financial Times‘s “Undercover Economist” column, has appeared on our blog many times. This guest post is adapted from his new book The Undercover Economist Strikes Back: How to Run or Ruin an Economy. Harford also appeared in our podcast “Hey Baby, Is That a Prius You’re Driving?“

Perhaps the strangest currency in the world can be found on the island of Yap, in Micronesia in the West Pacific. This coin, the rai, is a stone wheel with a hole in the middle. Some rai are fairly portable—a handspan or less across, and the weight of a couple of bags of sugar. But the most valued stones are far bigger—one British sailor wrote in the late nineteenth century of a stone wheel that was four and a half tons in weight and more than nine feet in diameter. In other words, it was almost completely immovable.

Yap’s stone money used to be a serious business. The stones were quarried and carved on the island of Palau, 250 miles away. One Victorian naturalist witnessed four hundred men from Yap, a tenth of the adult male population, at work in the quarries of Palau. Getting the stones from Palau to Yap on a little bamboo boat was a difficult and sometimes lethal affair—some of the stones weighed as much as two cars. (And rai were especially valuable if someone had died on the expedition to fetch them.) The biggest stones might have been used for major transactions such as buying land or wives; more modest-size stones—a couple of feet across—were exchangeable for a pig. Even then, it would have been a lot easier to move the pig than to move the stone.

All this meant that for purely practical reasons, the Yap islanders had to develop an important monetary innovation: they divorced ownership of the stone from physical control of the object. If you wanted to buy my pig, that transaction would be publicly witnessed: I’d give you the pig and in exchange, you’d transfer ownership of one of your stones—the one leaning against the tree, second on the left behind your hut. Now everybody would know that that particular stone was Tim’s stone. You and I wouldn’t have to go to the trouble of actually moving the thing.

One day, a crew from the quarries was bringing a new large stone from Palau when they ran into a storm not far from the coast of Yap. The stone sank, and the men swam to shore to tell the tale of their lucky escape and their loss. But of course, if the stone propped up outside your hut doesn’t need to move around to change ownership, why should the stone at the bottom of the sea be any different? This giant stone on the seabed had an owner—the chief who had sponsored the expedition to get it. And now his ownership could be transferred to another rich islander, and then to another, just as with any other stone. It was perfectly good money, even though it was out of sight and out of reach.

Yap’s monetary system sounds pretty close to insane. But is it? For many years the monetary systems of the developed world were based on gold. The gold itself—heavy stuff, although the ingots were not usually as heavy as a giant stone doughnut—would be left in bank vaults, after having been mined at great cost and risk from far-off lands. Naturally, in an anonymous urban society such as London or Venice, nobody could use the Yap island honor system of “everyone knows that’s Tim’s gold lying there.” But the idea was much the same. The gold, like the stone rai, rarely moved. It stayed in the bank vaults. People would instead carry around pieces of paper recording the fact that they owned the gold.

Banknotes such as the U.S. dollar and the pound sterling were descendants of this system. (Paper money has a much longer history, however. Kublai Khan, Chinese emperor in the thirteenth century, introduced a system of purely paper money that astounded the visiting Italian merchant Marco Polo.) Modern British and old American notes promise to pay “the bearer on demand,” a promise that once referred to redeeming the banknote in gold, just as with the private goldsmiths’ banknotes. But modern currency is no longer linked to gold at all—it once was but most countries broke that link, the “gold standard,” in the early 1930s.

So on Yap, they have this crazy system where the precious stone can be perfectly good money even when it is at the bottom of the sea. In the modern world, we have a far crazier system: the precious metal can be perfectly good money even though it isn’t there at all. We just circulate the bits of paper, with their nods and winks toward the old days when they were claims on gold in a vault. Now they are claims on nothing in particular, and somehow also claims on anything at all.

Reprinted from The Undercover Economist Strikes Back: How to Run or Ruin an Economy by Tim Harford, published by Riverhead Books.

This idea of public transactions the Yap islanders use seems remarkably similar to the Bitcoin system. Transactions are public in that they are broadcast to all Bitcoin users and we know who owns each bitcoin, not because of who has some physical object, but because we have a record of transactions that all users agree on in the Blockchain. The Yap islanders trust the system because they are a small community where they know most of eachother, people trust Bitcoin, because the cryptography keeps them honest.

So I thought this was going to be a metaphor for bitcoin.

Just watched a History Channel special on the top 100 inventions all time. Shockingly, currency was not on the list at all. The idea that a person will accept something of no nominal value or symbolic-only value for something of tangible value is a remarkable statement of trust that contradicts nearly everything else I believe about human trust.

Have fun carrying your hacksaws, chickens, and tobacco around with you at all times, trying to buy all of your consumer goods with them.

> Now they are claims on nothing in particular
Can't you do better than the hot potato theory of money value?
Money are claims on the government, you can use them to pay your obligation like taxes and fines.

"Now they are claims on nothing in particular, and somehow also claims on anything at all."

This idea that something can be nowhere (no physical presence) and everywhere (universally accessible) at the same times is one of the great blessings of modern society.

In one of my college Economics classes there was a test question about why a dollar bill has value. When the prof passed back the test a very large chunk of the class discovered they had gotten the wrong answer. The discussion and argument that followed was by a very wide margin the biggest argument I ever saw in college between students and professor. The issue of why money has value seems so simple and yet it's maybe the most perplexing issue in all of society.

What was the right answer?

What seems to be missing here is the idea that gold (along with silver) had some intrinsic value - people wanted to use it for jewelry, ornamentation, &c - and it was quite portable for ordinary sorts of purchases. It DID move around, just as our base-metal coins move today.

We could imagine another stone-based currency: diamonds, rubies, emeralds, and the like. Much more portable tha the Yap Islanders' stones, with the same decorative appeal as gold. But like the Yap stones, each is a unique individual, whereas gold is gold.

It's perhaps worth noting that since currencies have decoupled themselves from gold, the relative values have changed quite a bit. In the case of the US dollar, IIRC it was last pegged to gold at $35/oz. Now that same ounce of gold will buy you $1241 - a 35-fold increase,

The human being's primal urge to obtain power and control and maintain that power once it is obtained is reason enough to keep the fiat currency alive. People who have a lot of money want to keep the system alive and will do anything to protect it, and people who have no money will do anything to obtain it, and have no ability to ignore the system and start their own.

By the way, only $1.2 trillion of American dollars, paper and electronic actually exists, and much of that is overseas. Most of our wealth is held in investments and is actually just paper value. So even without printed money, we seem to do just fine.

"One day, a crew from the quarries was bringing a new large stone from Palau when they ran into a storm not far from the coast of Yap. The stone sank [but it remained] perfectly good money, even though it was out of sight and out of reach."

I’m reminded of the scene from Harold and Maude, when Harold gives Maude a present on Fisherman’s Warf. She thanks him warmly, and abruptly throws the gift into the water. Responding to Harold’s shocked expression, she explains her actions: “So I’ll always know where it is!”

As the Financial Adviser for the State of Yap, a large number of friends and family members would always ask me about the "Stone Money" and just how it works. They would make jokes about having to drive a fork lift to move your money.

It is a system that has worked since the beginning of time for Yap. It is a part of their culture and customs.

why gold and bitcoins, but not tulips? if it's scarcity, then why not my and only my pee? it's more rare than even the most precious metal. tongue solidly in cheek!

I'm sure someone thought of this already, but is there money that's tied to labor time? for example, 1 unit equals 1hour of work at minimum wage. I don't think there was widespread concept of min wage in past, so this might be something new.