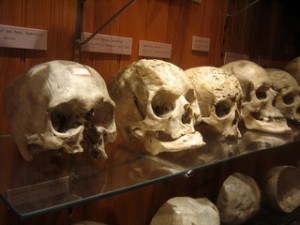 I visited the Mütter Museum (a great collection of medical and related memorabilia and information in Philadelphia), which had the following sign on one exhibit about shrunken heads: “Westerners traveling to the territory in the late 19th century … were fascinated with the heads and offered the tribe money and guns in exchange. … This led to an increase in warfare … both to get more heads to sell and because of the prevalence of guns.  It also led to the creation of counterfeit heads … made from real human heads but not prepared by the tribe, and others [that] were made from monkey, goat, or other animal skin.”  Nice to see how, even for a bizarre object, a large increase in demand elicits a supply response of both genuine and fake products.

I welcome other equally weird examples of induced supply responses with both genuine and fake products.

This really upsets me...as I witnessed an entire olive grove across the street from where I was raised in California, approx. 1,300 trees @ 100 years old, get violently uprooted, destroyed and eventually put in a wood chipper this past year. Within this same period of time, at least half a dozen other olive groves have met the same fate within a 2-3 mile radius...all because farmers can't make any money off their olives domestically anymore. Now after seeing this this morning, I can see why. Why are we shipping this crap over here?!!
http://www.nytimes.com/interactive/2014/01/24/opinion/food-chains-extra-virgin-suicide.html

The classic example is surely the medieval trade in alleged Christian relics, with any number of finger bones on the market purporting to belong to dead saints!

"...Upon closer examination it was found to be primarily composed of papier-mâché."
http://en.wikipedia.org/wiki/Mummy_forgeries

Higher Education degrees. I think that there was a repost of the broadcast Freak did a while ago on the paper mills. I still think that there is a wonderful study that the Stevens can do with those things. Remember the horror at finding MD's with these fake degrees? I wonder if those Doctors have had a higher malpractice incidence compared to people that have a real degree. If there isn't, it would give support that these licenses are just barriers to entry and not a set minimum of expertise that people lend to them (per the horror by the host). Not sure if someone that makes their living on funds from a system that is dependent on that barrier to entry would even delve into it, seems like career suicide to me. But then again, that no one has looked at it might be telling enough.

Also, on a tourist visit to Cartagena de India, Colombia, we were offered an authentic hand-made stencil poster. The seller claimed he drew it himself and it took him at least 8 hours. We found the exact same poster reproduced all over town in the following days ...

"Buyer Beware!
A guide to meteorite collecting can not be complete without some warnings. As mentioned above, the majority of meteorite dealers are eBay are authentic and excellent to deal with. Many offer money-back guarantees. However, like any item on eBay, the saying "buyer beware" applies. Every day, there are fake meteorites on eBay. Some of these sellers are unaware that their rock is not a meteorite - often they are described as "I found this in my backyard and it looks like a rock from space." These auctions typically do not receive any bids. Unfortunately, some sellers are more mischievous. Earth rocks are polished, tumbled, or even burned with a blowtorch to resemble meteorites.

Over time you will learn the names of sellers you trust, and you will be able to spot the fakes immediately. Until then, here are a few pieces of advice:
Look for sellers who mention that they are IMCA (International Meteorite Collector's Association) members. These sellers are monitored by their peers and guarantee authenticity.
If a seller is not a member of the IMCA, look for an excellent feedback history and return policy. If you are unsatisfied for any reason, will the seller refund your money?
For some reason, meteorites sold from China are particularly suspect. Avoid them when starting out.
If a deal seems too good to be true, then it probably is.
If you are not sure of something, do not bid. It's never worth the risk of losing your money.
Use this meteorite identification guide for help spotting fakes."

Apparently in the 1800s ancient Chinese pottery was hammered into bits when visiting British archeologists told rural villagers they would pay for each shard of pottery they were brought.

Virginity. Until recently, most brides allowed/encouraged people to assume that they were virgins, and marriages often were major economic transactions between families, where virginity was a necessary condition ("sold") for the marriage to happen and dowries to change hands.

My kids, however, would have no idea what a "shotgun wedding" is. It's just a "wedding, attended by the longtime couple's young children."

Isnt plagiarism and ghost writing essentially a problem of induced supply? Your undergraduate degree course requires you to write a million papers by the time youre done, and that acts as demand. In response, students tend to find creative means of plagiarising or using other people or indeed, organisations, to write their papers for them, which are the fakes, as opposed to genuine researched and cited papers written by themselves.

Integrity is the only thing that keeps me out of the supply side of this racket...I can crank out a "B" paper in most undergrad subjects in a few hours. And with the way the current generation writes, an A may simply require decent grammar and structure.

If we are looking as being on the supply side, perhaps the ones who actually do engage in these activities do not have to worry about integrity or being caught by an authority. The show "Suits" comes to mind, where the main protagonist carries on a profitable business of supplying well written papers to Law students, mainly because he himself was kicked out of school and hence doesn't care anymore.