Why Do We Vote? So We Can Tell People We Voted 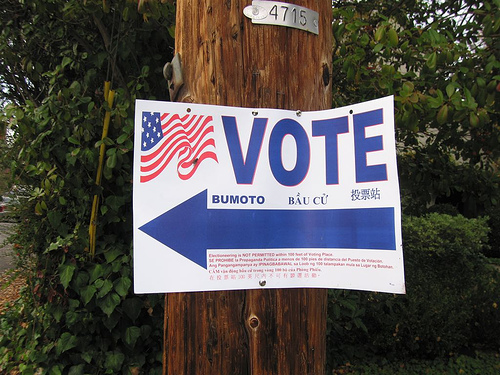 We once wrote about reasons to not vote, at least from an economist’s perspective. Since a single vote almost never alters an outcome, what’s in it for the voter?

If a given citizen doesn’t stand a chance of having her vote affect the outcome, why does she bother? In Switzerland, as in the U.S., “there exists a fairly strong social norm that a good citizen should go to the polls,” [Patricia] Funk writes. “As long as poll-voting was the only option, there was an incentive (or pressure) to go to the polls only to be seen handing in the vote. The motivation could be hope for social esteem, benefits from being perceived as a cooperator or just the avoidance of informal sanctions. Since in small communities, people know each other better and gossip about who fulfills civic duties and who doesn’t, the benefits of norm adherence were particularly high in this type of community.”

In other words, we do vote out of self-interest – a conclusion that will satisfy economists – but not necessarily the same self-interest as indicated by our actual ballot choice. For all the talk of how people “vote their pocketbooks,” the Swiss study suggests that we may be driven to vote less by a financial incentive than a social one. It may be that the most valuable payoff of voting is simply being seen at the polling place by your friends or co-workers.

The “suggestion” of that Swiss study has now been expanded upon, with experimentation, in a new working paper (abstract; earlier PDF) by Stefano DellaVigna, John List, Ulrike Malmendier, and Gautam Rao, called “Voting to Tell Others.” The abstract:

Why do people vote? We argue that social image plays a significant role in explaining turnout:  people vote because others will ask. The expectation of being asked motivates turnout if individuals derive pride from telling others that they voted, or feel shame from admitting that they did not vote, provided that lying is costly.  We design a field experiment to estimate the effect of social image concerns on voting.  In a door-to-door survey about election turnout, we experimentally vary (i) the informational content and use of a flyer pre-announcing the survey, (ii) the duration and payment for the survey, and (iii) the incentives to lie about past voting. Our estimates suggest significant social image concerns.  For a plausible range of lying costs, we estimate the monetary value of voting “because others will ask” to be in the range of $5-$15 for the 2010 Congressional election.  In a complementary get-out-the-vote experiment, we inform potential voters before the election that we will ask them later whether they voted.  We find suggestive evidence that the treatment increases turnout.

Okay, since we’re in a voting frame of mind, I will ask for your vote:

I am annoyed by the ongoing sub-theme in Freakonomics about the irrationality of voting. The idea that one vote will not make a difference is contradicted by the fact that the many votes which supposedly negate a single vote are themselves made up of single votes. If none of these single votes made a difference, then we would expect every election to come back undecided.

On the other hand, if we accept the idea that it is only large groups of votes that effect an election, then telling a large group of people not to vote could effect an election. While I am not proposing that Freakonomics listeners are electorally concentrated enough to swing an election, I think we also cannot assume that denigration of voting as irrational will have no aggregated effect. Consider a situation where not voting becomes a signal of rationality. What would this group of rational actors be saying to each other with their non-voting signal? "We, the smart people, know better than to vote, leave that to the dumb folks." But if you value being smart and understand how individual votes become many votes, then don't you want as many smart people to vote as possible? If you disagree, then I fully support your right to not vote.

We're talking about decision making from a micro standpoint, not the entire population. The decision here is not one candidate other the other, which would be a two vote swing, it is one candidate or nobody, a one vote swing. How many major elections have you heard of where the outcome was literally decided by one vote? I haven't heard of any. And if there have been, then congratulations, if you voted now your candidate will be in a run-off instead of losing (assuming that yours was the one that was down).

Personally, I never have the chance to get the stickers at all, because I just use absentee ballots. Why wait and line and waste the gas when I can just spend 49 cents on a stamp?

If you view an election as a 1 off event with no future impact then yes an individual vote makes very little difference. But, if you view politics and elections as an incremental process then over time politicians learn what we value based on who and what we vote for and then society and laws are changed advancing society and how politicians behave.

How does this translate to corporate Proxy votes?

Many corporations are struggling to get a quorum of proxy votes because shareholders are not motivated to vote.

It seems like the social motivation that works for government elections may not work for corporate proxy?

How do we get more people to vote proxies?

Voting does not change who is put in office. Uneducated people. Are the only ones that think they have a voice. A poll by definition is ur opinion. Those in charge pick who they want to represent an idea. Not peons. Voting as we have it or use it now is just to get the opinion of moronic people who actually think their dumb opinion matters. Faces will change but the policies this country run on are not decided by slaves I.e. Americans.

I vote for both economic and social concerns (can they actually be separated?). The question I find myself asking is: Why are my voting choices so different from those of my friends and family?