Marijuana and the NFL 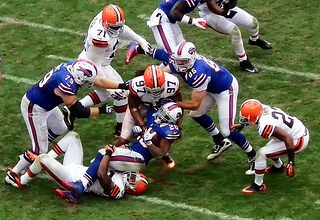 One of our very first Freakonomics Radio podcasts focused on brain trauma among NFL players. Writing for Vice, David Bienenstock argues that NFL players might benefit hugely from medical marijuana. He points to an editorial in the Washington Post earlier this year, describing research indicating that marijuana could protect player’s brains from the long-term effects of traumatic brain injuries:

As it turns out, recent studies are starting to contradict the notion that marijuana kills brain cells. Last year, researchers at Tel Aviv University in Israel gave low doses of THC, one of marijuana’s primary cannabinoids, to mice either before or after exposing them to brain trauma. They found that THC produced heightened amounts of chemicals in the brain that actually protected cells. Weeks later, the mice performed better on learning and memory tests, compared with a control group. The researchers concluded that THC could prevent long-term damage associated with brain injuries. Though preliminary, this is just one of many promising studies exploring marijuana’s benefits for the brain.

Bienenstock believes the drug can also play a role in pain relief.  “Marijuana is also a remarkably safe, effective pain reliever, with none of the dangerous side effects of commonly prescribed pharmaceuticals,” writes David Bienenstock. “Meanwhile, according to a study published in Drug and Alcohol Dependence, retired NFL players misuse prescription painkillers at a rate more than four times higher than the general population.”

All this is of course assuming that NFL players aren’t already smoking a ton of dope, which wouldn’t appear to be a great assumption. FWIW, NFL commissioner Roger Goodell is open to the idea of allowing medical marijuana — which, if you think about it, could be win-win for him: helping the players’ health while alleviating pressure on the league to police marijuana use.