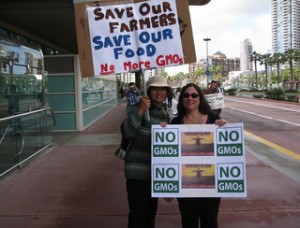 Genetically modified food (or G.M.O.’s) continue to provoke heated debates about safety and labeling, even though scientific evidence indicates they’re safe.  Why?  A new article in Cosmos by David Ropeik explores the psychology behind people’s G.M.O. fears. Here is Ropeik on why man-made risks “feel” scarier than natural risks.

Beyond those heuristics, several specific emotional characteristics also make G.M.O.’s feel scary. These “fear factors” have been identified in pioneering research in risk perception by Paul Slovic at the University of Oregon, Baruch Fischhoff at Carnegie Mellon University, and others. You can hear them pop up as the young man explains his fears. “It’s just not natural to take the gene from one species and put it in another. It’s just not natural!”

Indeed, taking a gene from a soil bacterium (Bacillus thuringiensis – Bt) that produces a natural pesticide and injecting that gene into the DNA of a soy plant, is hardly Mother Nature’s way of hybridising plants. But does that have anything to do with whether it’s actually risky? No. Scientifically, whether something is a risk depends on whether it is physically hazardous, in what ways and at what dose, and whether we’re exposed, at what age and how often. A radioactive particle in your lungs can cause cancer whether the particle came from the natural breakdown of uranium in the soil, which produces natural radon gas, or from a nuclear power plant accident. But risk perception research has found that natural risks don’t feel as scary as the the equivalent man-made risks.

My fear is not GMO's per se, but the greed of the corporations doing the engineering.

The results of this genetic engineering could be anything from utopian to apocalyptic. If the process was driven by a commitment to the common good, I would be for more comfortable. But the reality is the course of action is being determined by short-term profit motive regulated by intentionally ineffective oversight.

You seriously think dead customers wouldn't affect their quarterly numbers? GMOs are not a new thing, they have been in the US market for years, thats about the best test you could do.

Cigarette companies have been killing customers for years without hurting their profits (especially outside of the USA). Automobiles are the number 1 killer of children in this country and kill over 30,000 people a year and yet the auto industry has fought practically ever single safety feature introduced and not suffered a decline in profits as a result of not incorporating new safety features. Clearly companies are OK with a certain number of customer deaths if it means protecting their profits.

That said I do agree the fear of GMOs is misplaced and I find it especially funny that their are patents who fear their children eating GMOs but then happily strap their kid into a car to drive 1/2 mile or less to the store or school. Talk about irrational risk assessment!

To be fair, the right has been (and still is) more frequently anti-science. I do agree with you, though - my fellow liberals can be maddeningly anti-science when it comes to GMOs. The problem is that many people have built up a belief system in which natural things are good/healthy and corporations are bad. You can't simply change their mind about GMOs with compelling arguments or evidence - you would have to first change those other beliefs as well. Without doing so, good science gets dismissed as having been "bought" by agribusiness and bad science and anecdotes get trumpeted and their conclusions exaggerated.

I don't "fear" GMOs but I have a TON of questions that I don't believe are being answered. How does GM change the bioavailability of all the different nutrients of the food? How does it affect how the consumer's body process the food and what are the health risks to eating foods that your body doesn't recognize because of these genetic changes? What side effects on livestock fed with GM products carry forward to the people who then eat the livestock or their products, such as milk, cheese, eggs, etc. I think these are legitimate concerns that have either not been thoroughly studied or ignored when tests reveal internal complications such as precancerous cell formation, changes in blood cell counts , allergies, and many others are marginalized and/or ignored by organizations both public and private.

"Indeed, taking a gene from a soil bacterium (Bacillus thuringiensis - Bt) that produces a natural pesticide and injecting that gene into the DNA of a soy plant, is hardly Mother Nature’s way of hybridising plants." Ummmm...FAIL! Sorry, that is EXACTLY how Mother Gaia engineers plants, via Agrobacterium tumefaciens: that bug causes crown gall by inserting DNA into the host plant cells that provides a nice little niche environment for the bacterium to grow.

In fact, if people actually understood just how much other DNA finds its way into plant genomes, they would lose all fear of GMOs. Or, alternatively, not eat anything ever again - which wwould be a fitting Darwinian punishment for stupidity.

Seriously: just the tobacco (Nicotiana tabacum) genome, for example, contains genes or sequences derived from Agrobacterium, from plant-infecting single-stranded DNA geminiviruses, from single-stranded RNA potyviruses, from insects that feed on plants, and from other bacteria and probably from fungi. NATURALLY.

In fact, some of those sequences probably adventitiously help tobacco resist certain pathogens - so Nature/Gaia did something millenia ago that we are only just copying now.

ANd if we want to get radical, all mammals owe the fact they can make a placenta to one or other retrovirus that inserted into an ancestral genome, and left a bit behind.

Genetic engineering is NATURAL, people: its been going on throughout the evolutionary history of life on this and probably other planets. We humans have just learned how to direct it better, is all.

Because there are accounts and instances of some peoples bodies rejecting and being allergic to GM corn. They may be rare, but they exist. Because there's an increase in health issues and allergies that are unexplainable except for environmental factors and/or the issues didn't exist when we were eating whole, unmodified foods. Because GM market (Monsanto) has been used to coerce and punish small farmers trying to use heirloom seeds when wind cross pollinated their crops.

We don't know what we don't know. And to presume we know everything about it is what led American doctors to be the last ones in the world to acknowledge that germs exist.

PS I'm all for nuclear power.

No, there are not cases of that happening. There were cases where GM corn was suspected of causing allergic reactions, but after investigation it turned out to be other things.

That increase in health issues and allergies has also coincided with the rise in organic produce. You could just as easily blame them. Without a causal relationship, there's no evidence that GM foods are causing these things.

I'd say it's because the people that say it is safe can only do so from the limited and likely biased sampling done by the promoter of the GMO product.

The of a radioactive particle used in the above paragraph (which is a risk in both situations) is not the same as the GMO example.

The risk of the "unnatural" change (of gene splicing between very different living things) is that because it is completely new and not likely to ever happen on its own, we have no basis for saying that it was "ok". There is no historical evidence that showed that the introduction of this into the wild was successful / helpful / hurtful - evolutionary.

We hear that certain things can and have happened:
- only those that covenant with the producer in the way desired are allowed to test
- tests are repeated until successful results can be shown
- result data is squashed under threat of lawsuit
- possible side effects are brushed aside
- products recalled without comment

Then combine this the potential risk of outside contamination with actual results - escaped modified crops:
(http://en.wikipedia.org/wiki/Genetically_modified_food_controversies#Escape_of_modified_crops)

I'd say that people have a well-founded fear of GMO crops...

How about this - we require all GMO producers to make their product available (at regular costs) to any researcher that wants to study the product. The researcher is allowed to publish all data and results.

Then throw something in there to "protect" the producer from bad-guys (btw - the bad guys are getting the product anyway, and they don't want to publish...).

I'd feel a whole lot more comfortable if the research and publishing process were not stifled...

It's the same with the "organic" label. There are lots of things out there in nature that are poisonous to humans. It's not automatically safe just because man did not tamper with it (ie, organic).

Haven't companies that produce GMOs been buying out the FDA/ have been hired by the FDA for years? Aren't there lobbyists in congress and money spent in the media to persuade buyers to eat unhealthy?

Most people against GMOs really don't understand science at all.

Perhaps you can do another article called "Why is Monsanto scared of labeling GMO foods?" You can talk about how maybe it would be good for people to know what they are buying and eating, and maybe there isn't enough information for people to make the choices they want. Monsanto and others in the food industry put out lots of money to defeat the California and Washington food labeling initiatives. Your article can ask, if there's nothing wrong with GMOs, why would Monsanto have a problem with us knowing what we're buying?