The Relationship Between Hearing and Memory 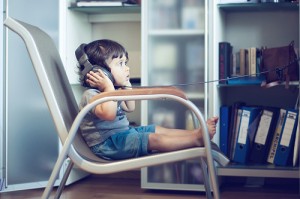 We’ve blogged before about how easy it is to create false memories. A new psychology study explores which of our senses are generally more influential in imprinting memory. “As it turns out, there is merit to the Chinese proverb ‘I hear, and I forget; I see, and I remember,” says James Bigelow, a graduate student at the University of Iowa who is lead author of the study.

The study consisted of two experiments that focused on short-term memory. Participants were exposed to different pictures, sounds, and objects to touch (shielded from view), and then asked to distinguish each thing from a similar item or identify it among a larger group. Sometimes participants’ memories were tested after only a matter of seconds, but in other instances the study stretched the time before recall to a day or even a week. While the accuracy of the participants’ memories declined across the board as time went on, the accuracy of their auditory recall plummeted more rapidly than that of the the other two senses.

…“We tend to think that the parts of our brain wired for memory are integrated,” says Amy Poremba, one of the study’s two authors, in a press release. “But our findings indicate our brain may use separate pathways to process information. Even more, our study suggests the brain may process auditory information differently than visual and tactile information, and alternative strategies—such as increased mental repetition—may be needed when trying to improve memory.”

I wonder if this has always been true. I think of long ago times when most people got their information (about almost everything) from speeches or town criers or their pastor's sermon. And they got little or no information from anything printed or any pictures. Were people long ago better able to remember and process information that they only heard? Maybe not, since that Chinese proverb had to come from somewhere. Very interesting. But like many interesting things it seems to create more new questions than it answers.

If you are referring to ancient rome or greece: They used to store hints to spatial visual information in order to enhance their memory. They distinguished natural memory, which you were born with, from artificial memory, which was enhanced by said techniques. http://en.wikipedia.org/wiki/Art_of_memory
A hint for their form of enhancing memory by made up visuals to retain memory is the personification of justicia for the justice system. She is wearing a blindfold to say she doesn't care about dignity, a scale to weigh the arguments and a sword to represent her power.

I despise my feebile memory. I have found, though, that my auditory recall is much better when paired with a visual stimulus, even an unrelated one. For instance, I often listen to podcasts (including Freakonomics, of course) while jogging the neighborhood or cleaning the house. The next time I'm jogging around a certain corner or cleaning a particular mirror, I can remember an incredible amount of detail from the segment of the podcast that was playing the previous time. The same is true of listening to someone tell a story while riding in a car. I might go through an intersection and have vivid recall of the portion of the story that I heard while at that intersection previously. I suspect the physical action/placement of my body plays a role, also. I doubt the connection would be as strong if I heard a story while looking at a picture and later saw the picture somewhere else.

Now, what did I sit down at this computer to do?

But remember, Gina, just because you have a vivid recollection something does NOT imply the recollection is actually accurate.

Ties into something that has long bothered me: why medical people will spend time explaining stuff about whatever you came to see them for, but hardly ever bother to write down even the most basic info. And so I've forgotten most of what they said by the time I'm out the door. At least these days I can look it up on the web...

Read, write, review, recall, recite. (not sure of order)

I had a hearing test and a week later I hear the hearing tones like the test. I wonder if it is a memory. In my 20,s I went threw a wind shield of a car and had short term memory maybe my hearing compensated. Just a thought.

Patients in the U.S. healthcare system often feel they’re treated with a lack of empathy. Doctors and nurses have tragically high levels of burnout....