Think Like a Freak: Our New Book Out on May 13

Good news (for us at least): our new book is done! It’s called Think Like a Freak. It will be published on May 13; but you can pre-order now on Amazon.com

, B&N.com, iTunes, or any of your finer online bookshops.

Think Like a Freak is, like our two earlier books, a blend of storytelling and data. But Think has a slightly different mission than Freakonomics and SuperFreakonomics. Here’s how we explain it in the first chapter:

The first two books were rarely prescriptive. For the most part, we simply used data to tell stories we found interesting, shining a light on parts of society that often lay in shadow. This book steps out of the shadows and tries to offer some advice that may occasionally be useful, whether you are interested in minor lifehacks or major global reforms.

Although we tell a million stories in Think,  the emphasis is usually on problem-solving:

It strikes us that in recent years, the idea has arisen that there is a “right” way to think about solving a given problem and of course a “wrong” way too. This inevitably leads to a lot of shouting—and, sadly, a lot of unsolved problems. Can this situation be improved upon? We hope so. We’d like to bury the idea that there’s a right way and a wrong way, a smart way and a foolish way, a red way and a blue way. The modern world demands that we all think a bit more productively, more creatively, more rationally; that we think from a different angle, with a different set of muscles, with a different set of expectations; that we think with neither fear nor favor, with neither blind optimism nor sour skepticism. That we think like—ahem—a Freak. 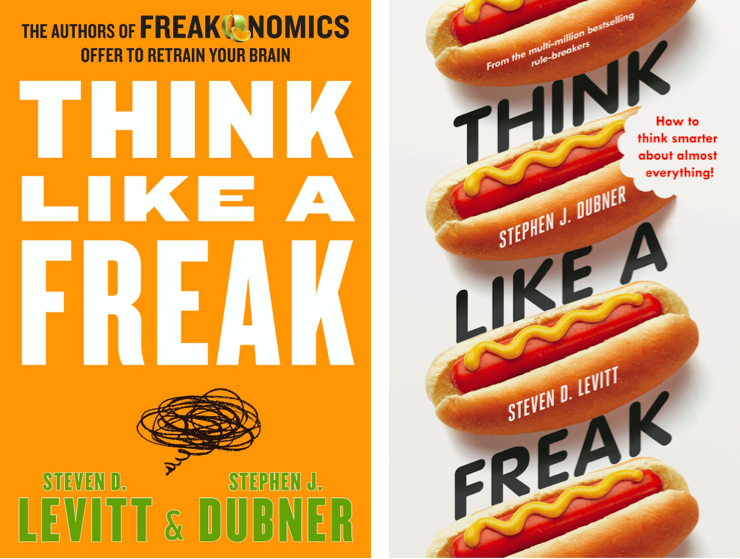 You can get the flavor of the book by checking out the Table of Contents, below. We can’t wait for you to read the book, and tell us what you think. On our “Upcoming Appearances” page, you can find the details of our U.S. and U.K. book tours (come say hello if we visit your city), as well as media appearances (like the Reddit.com AMA I’ll be doing on May 12). Once the book is out, we’ll start offering free signed bookplates so you can turn your standard-issue Think Like a Freak into an autographed edition. And keep your ear out for Freakonomics Radio episodes based on our favorite stories from Think, as well as a Think Like a Freak Book Club, in which Levitt and I will answer your questions about the book — and teach you, if you’re willing, to think like a Freak.

1. What Does It Mean to Think Like a Freak?

An endless supply of fascinating questions . . . The pros and cons of breast-feeding, fracking, and virtual currencies . . . There is no magic Freakonomics tool . . . Easy problems evaporate; it is the hard ones that linger . . . How to win the World Cup . . . Private benefits vs. the greater good . . . Thinking with a different set of muscles . . . Are married people happy or do happy people marry? . . . Get famous by thinking just once or twice a week . . . Our disastrous meeting with the future prime minister.

2. The Three Hardest Words in the English Language

4. Like a Bad Dye Job, the Truth Is in the Roots

Why a bucket of cash will not cure poverty and a planeload of food will not cure famine . . . How to find the root cause of a problem . . . Revisiting the abortion-crime link . . . What does Martin Luther have to do with the German economy? . . . How the “Scramble for Africa” created lasting strife . . . Why did slave traders lick the skin of the slaves they bought? . . . Medicine vs. folklore . . . Consider the ulcer . . . The first blockbuster drugs . . . Why did the young doctor swallow a batch of dangerous bacteria? . . . Talk about gastric upset! . . . The universe that lives in our gut . . . The power of poop.

7. What Do King Solomon and David Lee Roth Have in Common?

A pair of nice, Jewish, game-theory-loving boys . . . “Fetch me a sword!” . . . What the brown M&M’s were really about . . . Teach your garden to weed itself . . . Did medieval “ordeals” of boiling water really work? . . . You too can play God once in a while . . . Why are college applications so much longer than job applications? . . . Zappos and “The Offer” . . . The secret bullet factory’s warm-beer alarm . . . Why do Nigerian scammers say they are from Nigeria? . . . The cost of false alarms and other false positives . . . Will all the gullible people please come forward? . . . How to trick a terrorist into letting you know he’s a terrorist.

8. How to Persuade People Who Don’t Want to Be Persuaded

First, understand how hard this will be . . . Why are better-educated people more extremist? . . . Logic and fact are no match for ideology . . . The consumer has the only vote that counts . . . Don’t pretend your argument is perfect . . . How many lives would a driverless car save? . . . Keep the insults to yourself . . . Why you should tell stories . . . Is eating fat really so bad? . . . The Encyclopedia of Ethical Failure . . . What is the Bible “about”? . . . The Ten Commandments versus The Brady Bunch.

9. The Upside of Quitting

Winston Churchill was right—and wrong . . . The sunk cost fallacy and opportunity cost . . . You can’t solve tomorrow’s problem if you won’t abandon today’s dud . . . Celebrating failure with a party and cake . . . Why the flagship Chinese store did not open on time . . . Were the Challenger’s O-rings bound to fail? . . . Learn how you might fail without going to the trouble of failing . . . The $1 million question: “when to struggle and when to quit” . . . Would you let a coin toss decide your future? . . . “Should I quit the Mormon faith?” . . . Growing a beard will not make you happy . . . But ditching your girlfriend might . . . Why Dubner and Levitt are so fond of quitting . . . This whole book was about “letting go” . . . And now it’s your turn.