Testing the Limits of Google Translate

Google Translate is an amazing thing.  You can take a chunk of text in just about any language, paste it into Google Translate, and it is instantaneously (if imperfectly) translated.

Since I can’t speak anything other than English, I’m not in a great position to say how good or bad the translations are, but my multi-lingual friends generally turn their noses up at Google Translate, saying it doesn’t do that great a job.

My response is that compared to any other alternative I know (like trying to track down someone who speaks Croatian, or going word by word through a Croatian-English dictionary), it seems like a miracle.  I love it.

But even Google Translate has its limits. 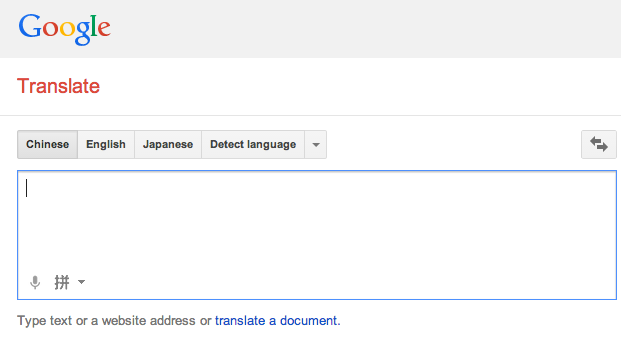 A few weeks back, I was in Germany.  I know a little tiny bit of German – enough to say things and sometimes be understood, but not enough to understand when people speak to me, usually.  I wanted to thank my hosts for being so gracious.  Just to be sure that what I was going to say in German made sense, I typed it in English into Google Translate and asked for the German translation.  What Google Translate gave back to me seemed a bit odd, but then again, German often seems odd to me.

I rehearsed the phrases until I was comfortable with them, and then confidently approached my host Hedwig (who spoke essentially no English) and told her, in German, how kind they had been and how nice it had been to be with them.

Usually when I do this, I am met with smiles and enthusiasm.  But this time, my host just looked at me forlornly.  So I said it again, more slowly and clearly.   She put her hand on my shoulder gently, the message being that what I said was so far from real German that I should please not say it again.  But I kept trying, even, in the end, spelling out some of the words.  The longer I tried, the more confused she became.

So I finally figured I would just show her the written words, still on my phone in Google Translate.

Not even Google Translate is smart enough to overcome that kind of stupidity, at least not yet.

I will be much more careful the next time I use Google Translate this way!

I, being reasonably good with six european languages, agree with you that Google Translate or Babelfish for that matter are actually quite good. I work in an environment where I quite often have to communicate in languages I only have a very vague notion of how they work, and the automated translations come in very handy.

As you point out, they often miss out the finer points in what you want to convey, and sometimes giving ridiculous suggestions. And naturally, we cannot expect them to correct our mistakes for us.

A 'trick' I tend to use in situations like the one you describe with Frau Hedwig, is to put in the text you want to translate, e.g. from English to German. Then reverse the translation and see what it pushes back at you. It is not foolproof, but it has saved me from saying really stupid things more than once!

Good idea Magnus! For fun I pasted your last paragraph into Google Translate, turned it to Japanese, then pasted the Japanese into Translate and turned it to English.

Original:
"A ‘trick’ I tend to use in situations like the one you describe with Frau Hedwig, is to put in the text you want to translate, e.g. from English to German. Then reverse the translation and see what it pushes back at you. It is not foolproof, but it has saved me from saying really stupid things more than once!"

Re-translated version:
"Tend to be used in situations like you describe one of the 1 Frau Hedwig the "trick", I from English to German is that in the text you want to translate, for example, put. Then, reverse translation, please refer to either push back to you. It is not foolproof, but it saved me more than once, he had said something really stupid!"

It's jumbled, but really not too bad!

Wait, is this true? How did you test to come up with this conclusion?

I once tested Google Translate vs. six other online translation engines, translating the same text. Google won, hands dumb. I mean, hands down!

"Since I can not speak anything other than English, I'm not a great chance to say how good or bad translations, but my multilingual friends tend to turn their noses up Google Translate words, it does not do that much work."

That's your paragraph above, translated into Finnish and then back into English.

That's exactly how I use it. Translate to the foreign language, then translate back to English to make sure that it makes sense.

As an old Latin student, I have three thoughts on Google Translate:

1) I wish that I had Google Translate back when i was conjugating verbs
2) i lament as today's students will use it instead of actually learning how to conjugate verbs
3) i take solace in the fact that conjugating verbs in Latin is fairly useless, so any cheating won't cheat them of much

If you type your phrase into the regular browser version, as opposed to the mobile version, it actually offers a correction.

Being Czech, having working proficiency in English, German and some Polish, I can attest that within closely related groups (Slavic, Germanic) Google Translate does remarkably good job. No one would mistake the results for utterance of a native speaker, but comprehensibility is fine.

On the other hand, Slavic-to-Germanic and the other way round is much worse, in an odd way. Some sentences are fine, some are garbled beyond recognition.

This website http://www.translatordetector.com/ will check if a translation is professional or has used a service like google translate.

English to Chinese works great, even better, I can snap a photo of Chinese characters with my phone, highlight them with my finger, and Google can translate it to English... brilliant for script based languages that you cannot type in your phone.

My trick to evaluate Google Translate is to pick a website from a well-known company and then cut and paste a chunk of text from the website.

This is from Ford's Russian website:
"Today, few people know that Ford has entered the Russian market in 1907. First representation of Ford Motor Company was located on the lines of Peter's house hotel "Russia". Buyers initially proposed a model «N», and then - model «T»."

This from Ford's Chinese website:
"Replacement business
National 200 Used Car Dealers have been authorized to carry out car replacement business. Replacement is the customer's purchase of a new car, the original Ford vehicles sold to dealers selling model. "

Actually its very limited. I have a very large collection of Japanese Language "Mooks" (Half-magazine, Half-book) all which are full of illustrations and captions. Some are about World War II some are on Industrial Designs others are about films. Google Translate doesn't work on more than half the Katakana because it doesn't know what the word is. I thought I'd finally have a way to translate these book captions in a more easy manner, but found Google Translate mostly doesn't work in the way I wanted it too.

I have your book and I am just starting reading it for a report for a course in MBA. I agree with you I use the google translate for almost 6 years now and I love it... I have a second language and I translate some stuff to Turkish, Spanish, Farsi, and others to comment on friends of mine posts to feel I am closer that way to them and they feel happy . 95% of them said I did a great job .

> Instead, I had typed in “I had such a mice time with you.”
> Not even Google Translate is smart enough to overcome that kind of stupidity, at least not yet.

They easily could by throwing the smart people they have from their computational linguistics-related start-up acquisitions onto the the huge amount of data they also conveniently have based on typing patterns and collocations from Google searches (including the subsequent refinements searchers make, and the "Did you mean" links they follow), Gmail e-mails (if can target you with ads, they can compute anonymized heuristics too; 'can' in the sense of an internal system and of legal rights too), and (more recently) Google Drive.

And in fact, they do as is evident by Search not just suggesting but auto-correcting your searches and Drive's, Gmail's and Chrome's underlining of perfectly spelled and constructed sentence with simple semantic mistakes ('their' vs. 'they're', etc.). It's just a matter of time before Translate gets advanced sementic corrections added too.

Round trip translation comically "illustrated" in the lesser known "Give up" song from Disney's Frozen:
https://www.youtube.com/watch?v=2bVAoVlFYf0