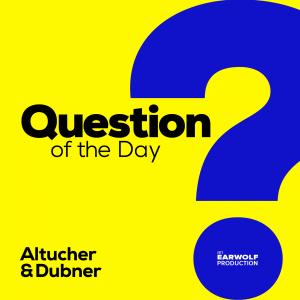 When Stephen Dubner’s new podcast Question of the Day launched in August, it immediately shot to No. 1 on the iTunes chart. Last month it was selected as one of iTunes “Best of 2015.” (You can subscribe here.) Now you can come see a live taping of the show on Thursday, January 14, at The Bell House in Brooklyn. Join Dubner, his Question of the Day co-host, James Altucher, and their special guest Negin Farsad for an evening of conversation that will run from the ridiculous to the sublime (and occasionally both).

The concept of Question of the Day is simple: Dubner and Altucher take turns asking each other a question — for instance: “What are the secrets of being likable?” “What is the best possible future discovery or invention?“ “What social norms will be considered immoral in 100 years?” In the blink of an eye, their conversation will range from fact-based reality to unapologetic dogma.

With Dubner and Altucher, you never know where the conversation will go, or what you’ll learn. Throw in a live audience — and their questions — and the night is sure to be memorable, and a lot of fun.

Buy tickets here. Or submit your own question for a chance to win two free tickets. Post it below in the comments section or tweet it @QOD.