Announcing the Debut of Tell Me Something I Don’t Know

A while back, we tried out a new idea on a special edition of Freakonomics Radio — a game show we called Tell Me Something I Don’t Know. You might remember it. It was so much fun that we decided to launch a whole new podcast series. It’s been in the works for a while and it’s finally here! A preview episode of the first season of TMSIDK is now available.

Please take a minute to subscribe and, if you like the sound of the preview episode, please please PLEASE leave a rating and/or review on iTunes — it’s really important in helping launch a new show.

Like all the Freakonomics stuff we do, TMSIDK is still journalism, still factual — but disguised in the most sparkling conversation you can handle. In each episode, audience contestants get on stage and tell us something fascinating (or earth-shaking, or just plain weird) while a panel of three experts tries to sort out what’s worth knowing and what’s not.

We also have plenty of comedians and humorists, including Keisha Zollar, Chris Gethard, Frank Delaney, Andy Zaltzman, and Hannibal Buress. And occasionally a globetrotting adventurer like author Simon Winchester. 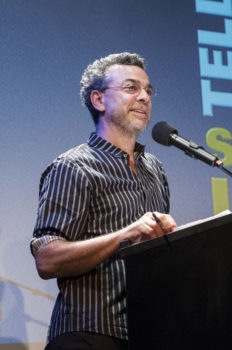 It’s all hosted by Stephen J. Dubner, who is accompanied each night by a real-time human fact-checker to keep everyone (mostly) honest.

Please subscribe today, so you don’t miss a single episode. The first one will be out on November 7. Season 1 will run six episodes — and we’re already taping Season 2 in New York City (in December and January), so come be a contestant or get tickets to see the show. You can also follow TMSIDK on Twitter, Facebook and Instagram.