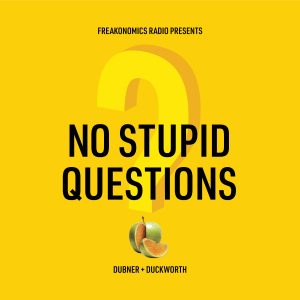 Stephen Dubner (co-author of the Freakonomics book series) and research psychologist Angela Duckworth (author of Grit) really like to ask people questions, and came to believe there’s no such thing as a stupid one. So they made a podcast where they can ask each other as many “stupid questions” as they want. Subscribe on Apple Podcasts, Stitcher, Google Podcasts, Spotify, wherever you get your podcasts, or use the R.S.S. feed. Follow No Stupid Questions on Facebook, Instagram, LinkedIn, and Twitter. And stay tuned to Freakonomics Radio and sign up for our newsletter.

In each episode Stephen and Angela take turns asking each other a question like: 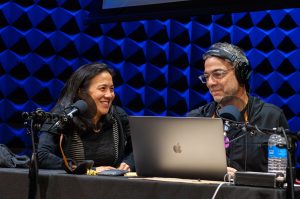 Stephen J. Dubner is an award-winning author, journalist, and TV and radio personality. He is co-author of the Freakonomics books, which have sold millions of copies in 40 languages, and host of Freakonomics Radio, which gets 8 million global monthly downloads and is heard by millions more on N.P.R. stations and other radio outlets.

Angela Duckworth is founder and C.E.O. of Character Lab, a nonprofit that uses psychological science to help children thrive. She is also the Rosa Lee and Egbert Chang Professor at the University of Pennsylvania, faculty co-director of the Penn-Wharton Behavior Change for Good Initiative, and faculty co-director of Wharton People Analytics. A 2013 MacArthur Fellow, Angela has advised the World Bank, NBA and NFL teams, and Fortune 500 C.E.O.’s. Angela’s TED talk is among the most-viewed of all time. Her book Grit: The Power of Passion and Perseverance is a No. 1 New York Times best seller.

Why Are Stories Stickier Than Statistics? (NSQ Ep. 10)

Also: are the most memorable stories less likely to be true?

Is Incompetence a Form of Dishonesty? (NSQ Ep. 6)

Also: should we all have personal mission statements?

In this new addition to the Freakonomics Radio Network, co-hosts Stephen Dubner and Angela Duckworth discuss the relationship between age and happiness. Also: does all creativity come from pain? New episodes of No Stupid Questions are released every Sunday evening — please subscribe wherever you get your podcasts.

What Do Tom Sawyer and the Founder of Duolingo Have in Common? (NSQ Ep. 5)

Also: is there such a thing as too much science? With special guest Luis von Ahn.