This week’s episode is called “A Better Way to Eat.” (You can subscribe to the podcast at iTunes, get the RSS feed, or listen via the media player above. You can also read the transcript, which includes credits for the music you’ll hear in the episode.) 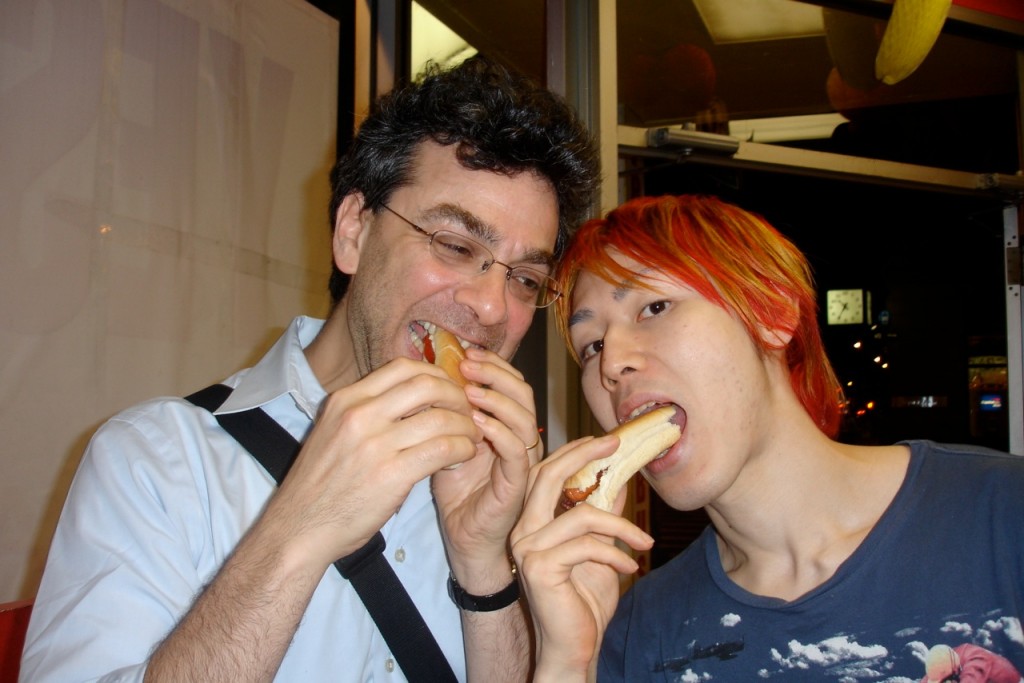 It features an interview with Takeru Kobayashi, who revolutionized the sport of competitive eating. So you’ll learn plenty about the tactics — physical, mental, and strategic — that Kobi employed while earning six straight victories in the Nathan’s Famous Fourth of July International Hot Dog Eating Contest. (He has also set world records with many other foods.) But the episode isn’t really about competitive eating. It’s about seeing what the rest of us can learn from the breakthroughs that Kobi accomplished in his training and his thinking. If there’s ever someone who truly thinks like a Freak, it’s Takeru Kobayashi.

For instance, he came to the conclusion that most competitive eaters simply didn’t think about the problem properly:

KOBAYASHI: My honest opinion was that people were just eating as an extension of regular eating meals, and it looked like they were all like rushing to try eat more than they normally could. Just one more hot dog, just a little more. And I thought, “Well, if you just look at it as a way of trying to put something in instead of, how much more can I eat than normal,” then it really just takes a few questions and a little research on my part and experimentation to see how far I could actually go.

He went very, very far — much farther, in fact, than anyone might have thought possible. This leads to another element of the Kobi magic: an unwillingness to accept limits or barriers that may not be worth honoring:

KOBAYASHI: I think the thing about human beings is that they make a limit in their mind of what their potential is. They decide, “I’ve been told this,” or “this is what society tells me,” or they’ve been made to believe something. If every human being actually threw away those thoughts and they actually did use that method of thinking [about] everything — the potential of human beings is great, it’s huge, compared to what they actually think of themselves.

Since a 2010 dispute with the Coney Island contest organizers, Kobi has not competed in that contest. But he still eats a huge pile of hot dogs in New York on July 4 — this year at 230 Fifth in Manhattan. If you have any interest at all in competitive eating — or problem solving, or doing away with artificial limits — you owe it to yourself to watch Kobi in person.

Special thanks to Maggie James for translating.

When I first heard about the Coney Island Hot Dog eating contest, featuring some amazing eaters, I thought to myself: "This sounds like the story of a PR guy who travels the world looking for supereaters.

A few months later I met my then-neighbor, Richard Shea, who quickly confirmed my theory.

What they did to the bear kind of sounds like animal abuse..

I love the freeconomics books and podcast, but was really disappointed and turned off on many levels by this week's episode. As someone who's traveled the world and even our own country, and seen the effects of hunger, I find sport eating of gluttonous amounts of food to be offensive. I find this particularly offensive when the food is meat, having come from an animal who suffered and died ostensibly for human need for nutrition, but whose body was used for an absurd game. Then there was the added cruelty of holding a bear captive, and making him hungry so he would play this ridiculous game.

There are many examples of people who've seen through barriers and broken them, and I would hope that you would seek them out and find them, and not contribute to the normalization of things like conspicuous waste of food and gluttony that I, at least, find offensive.

Thanks for allowing me to voice my feelings.

Large amounts of food are thrown out everyday unfortunately. In America, in order to keep shelves stocked and people spending, excess reserves of meats are always on hand in case another consumer is ready to resupply. Because of spoilage, a lot of this excess is thrown away. I would rather see a larger portion get eaten, even in this gluttonous food sport, than see it thrown out.

The real problem isn't the food sports and competitive eating, but actually with the meat companies and their inability to produce "enough" for the population. But when it costs less than a penny to make a hotdog, it makes no difference to the companies if it is thrown out or not. It is worth more to make it and take the risk of it being bought or wasted due to spoilage. Maybe a responsible limit on production is what we need. Maybe there is another solution.

Every elite competitor has developed skills that can probably benefit most of us: determination, the ability to challenge normal human limits, or a refusal to fear failure. But I tend to agree that glorifying those who participate in such clearly unhealthy activities diverts us a bit from the pursuit of a more enriched and enlightened society, which I like to believe is what we're all trying to do - each in our own way. Happy post-Independence Day, and cheers to our great nation.

Where is Steve Levitt?

In the 60's a late night movie show in Cleveland used to have a pizza eating contest, one on one. The champion was "Mush Mouth Mariano Pacetti." Thrashed all comers for many weeks until they brought in a German Shepherd. The dog won, but was disqualified for some reason or other. In eating contests never bet against the animal.

I liked the podcast and I think it is a funny contest, but I'm willing to bet that we won't have a contest like this in 2020.

Someone is going to die by bursting their stomach or some other horrible gastro problem and that will be the end of basically all eating competitions. (that little waiver they sign will NOT stop a massive lawsuit - plus, no product wants to be associated with death).

or choking to death - http://www.dailystar.co.uk/news/latest-news/388033/Walter-Eagle-Tail-chokes-dies-hot-dog-eating-contest-Custer

This story reminds me of the story of the first guy who ran faster than the 4 minute mile in the olympics. It used to be thought impossible for a human to run a 4 minute mile when the olympics records were for 4 minutes and 11 seconds or longer. The guy who finally beat it had to overcome the similar artificial limits and he did it by like writing down the time 4 minutes on a piece of paper and putting it in his shoe when he ran and other tricks to psych himself up to believe it was possible.

Is there a correlation between the propensity of southerners to drink 'sweet tea' and the rise in obesity in the south?

I wanted to ask you this question as a Freak-quently Asked Question, but it ties in perfectly with this episode. The basic question is, what is the best order to eat a meal in to get the most satisfaction? I have a quirk where I will leave my favorite or tastiest part of the meal as the last thing I eat. I noticed that a lot of people do the same thing. However, when I thought about it, there seems like like there may be two principals at play here. One is that as you get fuller you enjoy your meal less and less, such that overeating eating your favorite dish will make it so the last bite is far less enjoyable than the first. Secondly, if you leave your meal having your favorite part of it, that may leave you with a good memory and taste in the mouth. So what is the economists answer on this?

One of my bucket list items is to win a food competition. Ideally as part of the victory my portrait will be on the wall in some sandwich shop in some part of the world. I think despite Kobayashi's popularity (and the Freakonomics books' fame), there must still be places in the world that don't know about the Solomon method. Those records are ripe for the taking.

In a country where many people go to bed hungry, and that also has an alarming and rising rate of obesity glamorizing gluttony is something Freakonomics should not be contributing to.

“Competitive eating" is not a sport. It is unfair to both food and sport.

And as one who has filmed one of these “contests” I can assure you that there is nothing healthy or fun about the sight of people frantically cramming as many hot dogs down their gullets as fast as they possibly can. It is vulgar and repulsive.

This is a shameful broadcast.