Ben Bernanke Gives Himself a Grade 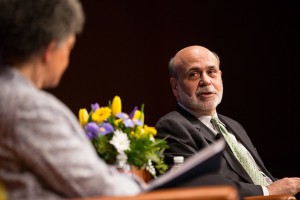 On this week’s episode of Freakonomics Radio, two interviews: first, former Fed chairman Ben Bernanke, who was handed the keys to the global economy just as it started heading off a cliff. And then Anne-Marie Slaughter, a former State Department adviser, who was best known for her adamant views on Syria when she accidentally became a poster girl for modern feminism.

Bernanke tells us what he knew and didn’t know about the state of the economy as the financial crisis began to unfold, and he explains what FDR got right and wrong during the Great Depression. Slaughter continues the heated national conversation sparked by her 2012 Atlantic essay “Why Women Still Can’t Have It All,” and we talk about her early warnings on Syria and what she’d suggest if she had the White House’s ear today.

To find out more, check out the podcasts from which this hour was drawn: “Ben Bernanke Gives Himself a Grade” and “Meet the Woman Who Said Women Can’t Have It All.”

I clearly remember the moments (months, actually) before Bernanke (may I call him that?) advised that the government should save employees of Citibank ("Live Richly"), Chase and the millions of others who decided to forsake decent or challenging jobs and instead grab at the easy money until an adult stepped in and called game over. I pined not for schadenfreude but simply for transparency and democracy in a marketplace where the "biggest fish are caught in the muddiest waters." The story we sell abroad.

As a patriotic American, I relished that moment.

Capitalism, democracy -- are these things real? Do they work? We were finally, about to find out! This twisted system would be pulled back into shape -- by the underlying principles and morality that shapes our laws! As it would turn out, these moments before Bernanke assumed office were as close as we would ever come to really testing the faith and backbone that so many millions of Americans work toward and even fight for. Your questions to him? The right ones, 8 years too late. Bernanke should have been the antidote to Greenspan -- not his intern.

Um, even in a conversation about a woman's role in society we can't get the woman's name in the title of the episode? She get's an invisible second billing? Ridiculous.

I was on board with everything Slaughter said until the end when they discussed the "opportunity spectrum." She said single moms are at the bottom of the spectrum, which is a gross generalization. The people at the bottom of the spectrum are hourly workers (men and women) who receive low wages and limited benefits. Some single moms fall into this group, but not all. I know plenty of single moms (including myself) who come from the same "elitist" background as Slaughter and have done very well for themselves in corporate America despite being single mothers. I believe all single mothers have similar struggles, but it is unfair to lump is into the same group!

"It's always easier to shout about the things that have gone wrong than to appreciate what hasn't gone wrong" So true! People who are effective parents, software developers, system administrators, and many others are rarely recognized for their diligence and good judgement that prevents problems. How to recognize and reward those who identify risks, potential problems, and quietly fix them. How to incentivize others to do the same? Or are top performers those who prevent problems themselves (somewhat valued), and also able to fix problems caused by others (highly valued)?