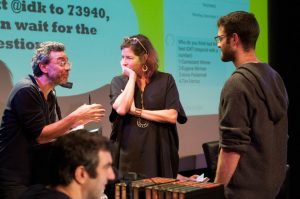 Over hundreds of years, Russians have developed thousands of variations on four simple swear words that can mean anything under the sun. This collection of curses is large enough that Russians can have entire conversations using almost nothing but swears. Entire plays and novels have been written in swear words. This language is called “mat.” Mat includes a huge collection of idiomatic phrases — more than 10,000 by one estimate — including filthy ways of telling someone off, ignoring something, expressing frustration, etc.

The Russian government has tried to crack down on mat for hundreds of years – they see it as a language of dissent and resistance to authority. You can take any period in Russian history and look at the government’s attitude towards mat as a good barometer for the state of freedom of expression in general. President Putin‘s government banned mat from concerts, movies and public presentations – if we taped our show in Russia, our contestant would have been fined at least $40.

We’ve gathered amazing and surprising facts from the world of Collections. We’re not talking baseball cards and Beanie Babies—we’ve got: glucose, gamma rays, brainwaves, fake art and some very blue Russian. Our panelists:

Anne Pasternak, director of the Brooklyn Museum, once collected a stomach full of cat food.

Our real-time fact-checker is A.J. Jacobs, host of Twice Removed, who has some holes in his encyclopedic knowledge.