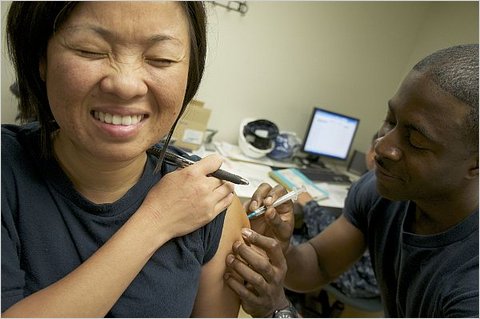 Bring on the Pain! It’s not about how much something hurts — it’s how you remember the pain. This week, lessons on pain from the New York City subway, the professional hockey rink, and a landmark study of colonoscopy patients. So have a listen. We promise, it won’t hurt a bit.

Most people do what they can to avoid pain. That said, it’s an inevitable part of life. So how do you deal with it?

That’s the question we explore in our latest Freakonomics Radio podcast (you can download/subscribe at iTunes, get the RSS feed, read the transcript, listen live via the link in the box above or read the transcript here). We look into a few different kinds of pain, inflicted in different circumstances, to see what we can learn. The biggest takeaway: it’s not necessarily how much something hurts; it’s how you remember the pain.

We start off underground, in the New York City subway, where noise pollution abounds and where one particular noise is downright painful. You’ll hear it in the podcast, and we talk about it with Pete Foley, a longtime “revenue equipment maintainer” with the Metropolitan Transit Authority. He admits that the entry/exit setup in the subway is way sub-optimal, producing lots of needless noise from bleating alarms: 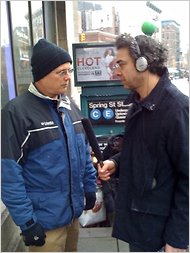 Pete Foley and Dubner outside the Spring Street subway station in Lower Manhattan.

SJD: Do you think there are any hidden benefits, though, to this alarm? Do you think maybe it keeps rats out of the subway?

Foley: Actually I’m not as a taxpayer … [but] the overtime’s good.

You’ll also hear about a very different kind of pain — jaw-breaking physical pain — from a couple of New York Islanders defensemen, Jack Hillen and Andrew MacDonald. The Islanders are among the league leaders in blocked shots, and some of them hurt an awful lot. So how do players withstand the pain, and put it behind them in order to keep hauling their bodies onto the ice night after night?

Here’s a look at Hillen taking one of the most brutal shot-blocks you’re likely to see, a puck off the stick of Alexander Ovechkin:

We also talk to Governor Martin O’Malley of Maryland, who recently had to talk his constituents through the pain of accepting a massive budget shortfall. We happened to interview O’Malley the day before his State of the State address, and asked how often he’s mentioned the words pain or painful: 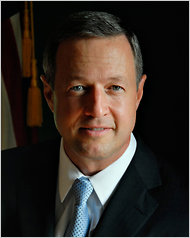 The heavyweight of our pain episode is Donald Redelmeier, a Toronto physician and researcher whose clever and creative research you may have read about in the past on this blog. Redelemeier has a lot of experience helping people in pain:

We talk to Redelmeier about his research, done in collaboration with Daniel Kahneman, on colonoscopy patients — how they experience pain during the procedure but also, more important, how they remember the experience of the pain. Much of what they learned is fascinating, and surprising, and tells us a lot about how human beings process any kind of pain — whether it comes from a colonoscope, a tight budget, a hockey puck or a shrieking subway alarm.

So have a listen. We promise: it won’t hurt a bit.

not so much that noise pollution causes pain, but it raises blood pressure, and as such is a public health issue

You know what's far less painful than it looks? Flu shots. I usually don't even see or feel the needle. The arm is a little sore for a day and that's it. Yet any story or poster about flu shots has to show a close-up picture of a shoulder getting jabbed with a needle, as if there isn't enough anxiety about needles.

It seems odd that the English language (and the several others I know imperfectly) has only the one word to cover all the different kinds of pain: the almost pleasureable "no pain, no gain" feeling of forcing out that last rep at the weights, the sharp agony of a toothache, the dull ache (not at all like a toothache!) of a bone-deep bruise, the not at all physical sensation of sending off the estimated tax payment... And yet there are hundreds if not thousands of words available to e.g. make subtle distinctions between shades of color, and dozens at least for sensations of hearing & touch. Is it that it's just not human nature to dwell on the thought of pain more than we absolutely must?

Some of the flu shot ads show an ungloved hand posing with the index finger hovering over the plunger of a syringe aimed at an arm, dart board fashion, and the syringe is very large and looks like an old-fashioned glass one. It's unrealistic, and you'd have to try hard to make it look creepier.

Nothing comes close to major pain - for male that is - then the kidney stones at their worst attack. The only reprieve is a slow crawl on the floor of the emergency room and a hope that someone will come and help you.

I thought that first picture was of Amy Chua (Tiger Mother) finally getting her dose of Western Medicine.

Sounds like you need RjDj to convert that siren into music:
http://www.rjdj.me/

I used to think I was pretty tough when it came to pain. Until my urologist stuck a scope where nothing had gone before, looked around the inside of my bladder, and said he needed to scrape away some stuff. There is no word in my vocabularly to describe this event. Reminded me of that scene in "Gone With The Wind" where the old doc had to saw off the soldier's leg. Ooooooo.

I deal with pain by simply staring it in the face. I go to the doctor and I stare directly at the injection point. I clench my teeth if I need to.

I thought you were going to talk about pain we inflict on ourselves voluntarily (not just taxes which most of the rest of the world thinks we're crazy to pay voluntarily). What about the dentist? Flu shots and colonoscopies (done with your lights out) can't hold a candle to dentistry. All the worst; a big, really big needle to start and then they get serious. The only thing worse than a trip to the dentist is not going to the dentist. Maybe. For many it's a toss up that the dentist looses. Fact: among the medical professions dentists have the highest rate of suicide. Why? They have a tough time dealing with the 'I hate you' they face from patients for the pain they force them to willfully inflict on themselves.

A recent study gives a hint on how to reduce the experience of pain:

"Pain reduced by changing what you look at

What you look at can influence how much pain you feel, a study has revealed.

Contrary to many people's compulsion to look away during a painful event such as an injection, scientists found that looking at your body - ... - reduces the pain experienced."

One could think about the pain of giving birth without any drugs and about the fact that many women go through that more than once.
In my case, I just did my best to forget after the first time and not to think about the upcoming second time. You know... an ostrich kind of approach!

You initial example is silly. Those pioneers who go through the doors are productivity heroes! So they personally save a mere 45 seconds, but 30 people go through with them each saving 45 seconds while also reducing the strain on the rate limiting step (the turnstile). That is about 25 minutes of time saved! There are thousands of stops on the subway system daily.

In other words your "criminals" are creating hundreds of thousands of man-hours for NYC each year!

Absolutely loved this podcast. It might have been interesting if you'd looked at someone with Congenital Insensitivity to Pain (CIP). This is a disorder where the sufferer does not feel pain. It may have been interesting to see how their pain (or lack thereof) has affected the way in which they live.

I'm surprised and disappointed that at no point during the subway piece did anyone mention those of us with strollers, walkers or wheelchairs. These can't fit through the turnstiles and require us to use the annoyingly loud "emergency" door. It reflects a lack of understanding of the issue and, in my opinion, the author's understanding of pain.

Great podcast. After analyzing a study by Daniel Hamermesh (2003) in one of my economics classes, I now realize that the productivity effect on beautiful teachers might simply be that sitting through their classes is less painful.

I would like to see a follow-up to this episode focused on the problem of grade-inflation. Specifically, that professors at the undergraduate level are rated more highly if their class and instruction style are painless for students. Better, more rigorous professors might do a better job of helping students retain concepts, but if their methods are more demanding of students, or in essence more painful, they might receive lower ratings.

I just wanna say many of the people I see going through the emergency doors are people with rolling bags or strollers. Maybe be you see less of that during rush hours but there is no other way to get big things through the normal doors.

I would love to see the colonoscopy study applied to customer satisfaction, i.e. two similar and unpleasant purchases, but in one transaction the payment or close-out process is significantly streamlined.

Additionally, would this phenomenon translate to commercial travel, i.e. do travelers on a plane that is delayed 15 minutes at the beginning of the flight (sitting on the runway waiting to take off) have a more positive recollection of the trip than travelers who are delayed 15 minutes at the end of a flight (sitting on the plane waiting for an open gate)?