Exit Interview: Schools Chancellor, NYC: Joel I. Klein spent the past eight years running the biggest school system in the country. So what’d he learn?

The new episode of our Freakonomics Radio podcast (you can download/subscribe at iTunes, get the RSS feed, read the transcript, or listen live via the link in box at right) also introduces a new format: the exit interview. This week’s guest: outgoing New York City schools chancellor Joel Klein. (If you have suggestions for future exit interview subjects, be they well-known or simply interesting, please let us know in the comments below.)

Klein spent the past eight years running the country’s biggest school system. He came to the job as an education outsider, having spent most of his career as a Washington lawyer, including stints at the Department of Justice and in the Clinton White House. He is leaving the schools job to run a new education unit for Rupert Murdoch‘s News Corp., where he will get a nice little bump in pay. Besides the salary increase, Klein acknowledged he left the schools job so he and his wife could spend more time with their beloved dog, Roger.

Klein’s tenure as schools chancellor was eventful, to say the least. He eliminated community districts; closed low-performing schools and opened up lots of new ones (including many charter schools, which he put his full weight behind); tangled repeatedly with the teachers’ union; and changed the shape of the relationship of the Department of Education with its teachers, parents and students. He was also eager to experiment, whether with pay-for-grades schemes or the School of One program we discussed in an earlier podcast. 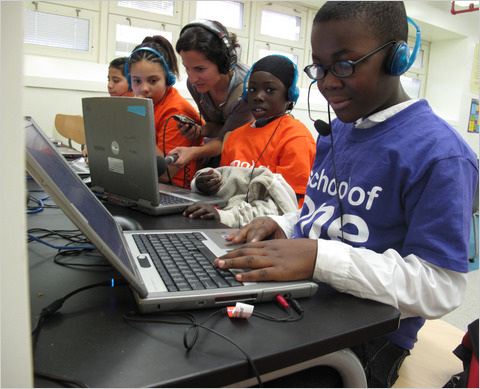 The School of One pilot program, which creates a learning “playlist” for every student.

Klein was a pretty candid interview subject. He made it plain that for all the battles he fought, and even won, there are still a lot of obstacles to turning public education into a performance-based enterprise:

I was able to see this in a way that I think people who grew up inside the system were unlikely to see it. Before there was Freakonomics, I actually believed in incentives and thought that they affect the way organizations work. It just seemed to me that everything in K-12 education was misaligned. We incentivize all the wrong things.

Klein is being replaced by Cathleen Black – who, like Klein, comes to the job from outside the realm of education (she was chairwoman of Hearst Magazines). This has been a noisy issue but Klein says it shouldn’t be:

I used to say that the managing partner of a law firm necessarily shouldn’t be a lawyer. Lawyers are not steeped in management, in human capital and creating incentives and creating an organization that is a problem-solving organization – those are not the things that people have been trained to do. You can be a great teacher and actually a poor principal. One of the things that always struck me is we thought people had to be a teacher first before you can be a principal. Why shouldn’t there be people who can come in who have the management skills, appoint a strong deputy, put together a team and get the work done?

In the podcast, Klein also grades himself on the various aspects of his job. His worst performance? Public relations, he says.

As a classroom teacher, my principal encouraged me to become an administrator, because, as he said, That's where you can make things happen for kids." I told him that I preferred to stay in the classroom where I could REALLY make it happen for kids, but that I appreciated his support to make the financial and administrative decisions that allowed me to make it happen.

If you've never been in the classroom, you have an education in itself if you spend a day observing what goes on (and, in some cases, what doesn't go on) there.

If we spent half as much time and money on classroom materials and got the same kind of parental support as we do for football and basketball-and the stadiums that hold the fans-we could have a first-rate education system. So long as we pay administrators and coaches three times what we pay the average classroom teachers, you will get what you pay for.

When is someone going to tell the truth about education? The parents' attitudes are the major factor in educational outcome. It's that simple.

You may not have to be a teacher to be an effective Superintendent, but politicians aren't the best choice, and may in fact be the very worst choice.

The hard truths about education are truly politically incorrect.

Good riddance to Mr. Klein. Unfortunately, we can't fully enjoy his exit because of his equally unqualified replacement. The bottom line is that Mr. Klein's dog probably gets more attention at home than many NYC students. Single parent families, families with two working parents, poverty, crime- all these factors account for children's failure in school and all the standardized tests and charter schools in the world will not change that. The countries that exceed us in education are not doing so with charter schools but by addressing poverty. Why is that little detail always ignored by the "failing schools" crowd?

This argument has been ongoing in the engineering area as well. Irwin Jacobs, the founder of Qualcomm, early in his career was bothered by the treatment of engineers in business (this was on the East Coast) and opted to swerve into higher education. My opinion was the same, at the start of my EE career, for a lot of reasons, but the largest was due to having done something truly extraordinary - writing software to automate the testing process for printed circuit boards, on MY OWN TIME - but was deliberately stopped from implementing it by an autocratic SOB who was protecting his dog-eat-dog organization against change that would decrease the 'competition' among three managers (by moving the 13 test engineers to some other task.) - and decided to get an MBA.

I did this not for money or power, I did this to try to avoid corporate bureaucrats. Every time I myself have taken a management position, the first thing I know is that on a consistent basis I must be able to look into a mirror and say to myself "Well, now I'm the bozo."

People who acquire positions of power without a significant foundation of either education or practice are almost always going to make grave mistakes AND use their power to serve their own purposes rather than that of the organization or those individuals who DO something.

They almost always make the prime mistake of confusing control with accomplishment, and image with substance.

Klein had to leave before people realized that NY kids don't work any harder and their parents don't parent any better than when he began. The achievement numbers aren't better, charter schools are being exposed as frauds, and public school teachers still get treated like dirt by everyone under the Sun who is angry and bitter about their own failed economic lives. When the liberal elitists and conservative religious nuts get done with us, we'll have an educational system similar to Mexico's.

Across this great land, especially in large urban school districts, children pass through metal detectors to learn. In many of our schools, our children are afraid and cohere with a small group for safety. Many children are afraid to go to the restroom alone and when they get there the stench and the filth plus the lack of toilet necessities make the room a health hazard. There is a tension in the building as adults and children wait for one gang member to slight another and full scale war erupts. Children bring firearms to school and shoot each other, the teachers or the administrators.

Children do their homework completely, half heartedly or not at all. Wander through any department store or mall in America during school hours and be amazed at the numbers of school aged children wandering the same terrain, with parent or without.

Several million children have arrived at the school door from another country since the 1980's, most speaking no English, and have been lovingly instructed in their own language with a goal of transitioning them to all English classrooms.

45 million people are on food stamps and they too send their children to school but few in the middle class, especially the white middle class, want to send their children to the schools those on food stamps attend. So, charter schools are given the task of further separating the poor from the rest of us turning a public educational system into a racist and classist system. Like the rest of America.

But the right wing tells us the problems with public education are ineffective teachers and teachers' unions. And as long as a gullible, unquestioning, anti-union public believes such nonsense, there will always be Joel Kleins and Michelle Rhees around to feed them even more.

We started falling behind other countries when we adopted all of the special education laws. It is impossible to teach with handicapped children dumped into the main classroom. It is hard enough to teach a classroom of kids the required curriculum without having to provide for varying disabilities - students who used to be taught in small classrooms with teachers trained to teach them. Throw in the discipline problems that would not be tolerated in other countries and the American classroom teachers have their hands tied. In addition, a few disruptive children are allowed to undermine the education of the majority. The average parent would be shocked to see what is allowed to go on in the classroom. The public educator is forced to deal with the bottom and let everyone else fend for themselves. Plus, for the student, it is human nature to see where the standard is and relax if you are above it. Catering to the lowest common denominator causes the majority to lower their own personal standards. Public schools are not allowed to operate like the real world but are bashed when they don't perform like the real world.