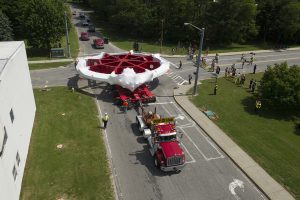 The Muon g-2 massive electromagnet begins its 3,200-mile journey from the woods of Long Island to the plains near Chicago. (Photo courtesy of Brookhaven National Laboratory)

Fermilab — Fermi National Accelerator Laboratory — outside Chicago, needed a 50-foot, 15-ton, superconducting electromagnet for their quantum experiment with muon particles. Fortunately, Brookhaven National Laboratory had such a magnet to give. The only problem: how to move it without knocking the magnet out of alignment. The muon magnet couldn’t flex or bend by more than an eighth of an inch over its 50-foot diameter at any point of the 1,000 miles between the two labs.

The magnet’s journey ended up being more than three times longer than originally intended. The transporters built a rigid exoskeleton to hold everything in place, set it on three canisters on a barge and floated it to Chicago. Its passage also shut down an entire highway in the dead of night.

Join Tell Me Something I Don’t Know in the City of Big Shoulders for a show on transitions — from here to there, from low to high and from fish to human. Our panelists are:

Che “Rhymefest” Smith, Grammy-winning hip-hop artist and political organizer, who went through more than 50 jobs to get where he is now.

Ginger Evans, commissioner of the Chicago Department of Aviation, who is partially to thank/blame for the TSA.

Mary Catherine Curran, Chicago-based comedian, who knows how to deal with problems in transit.