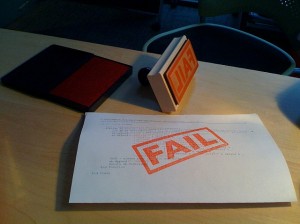 Our latest podcast is called “Government Employees Gone Wild.” (You can download/subscribe at iTunes, get the RSS feed, or listen via the media player above. You can also read the transcript below; it includes credits for the music you’ll hear in the episode.)

It’s about a book that I’ve come to love — a most unusual book. What makes it unusual?

This unusual book is called The Encyclopedia of Ethical Failure, and you can get it here (2013 additions here). What is it? It’s an ethics guide for  government employees, full of true stories about epic screw-ups. In the podcast, you’ll hear from the Encyclopedia‘s founding editor (Steve Epstein) and its current editor (Jeff Green). Epstein explains how the project came about:

EPSTEIN: There was a requirement that we train our senior officials and many other officials in the government every year. And the problem of course is keeping that training fresh, keeping it relevant. And to do that we discovered that the first thing you have to do is you have to entertain folks enough so they will pay attention.

How do you do that — entertain folks while teaching them? By telling stories, of course. In this case, all the stories are true, divided into chapters that include “Fraud,” “Gambling,” “Conflicts of interest,” and “Abuse of Position.” Here’s one, for instance, that gives “governmental red tape” a new meaning:

“Two workers at the Veterans Affairs Consolidated Mail Outpatient Pharmacy, which mails prescriptions to veterans, were charged with taking kickbacks for purchasing a product from a supplier at more than twice the normal price.  The product?  Red tape.  The employees were charged with purchasing 100,000 rolls of the tape, which is stamped with the word “security” and is meant to deter tampering, at $6.95 a roll rather than its $2.50 retail value.  In return, they received kickbacks of more than $1 per roll. The duo will have plenty of time to appreciate the irony of their situation, as they face a sentence of 15 years in jail.”

There is also, as you can imagine, a lot of sex in the Encyclopedia. Here’s Green explaining a particularly twisted incident:

GREEN: We have one involved a navy officer who was in charge of a submarine. He was married and was carrying on an affair with another woman and he got her pregnant. And so he rigged up his email so that someone else sent her an email that said he passed away in the service of his country.

My favorite thing about this episode is the voice you’ll hear reading several Encyclopedia entries. It belongs to Laura Walker, President and CEO of New York Public Radio. We recruited her based on her compelling pledge-drive announcements (seriously, I find them compelling). For this task, she came to the studio prepared and upbeat, and did a great job. Much thanks to her, Epstein, and Green.

I'm guessing this will be entertaining, and I'll probably read it, but I assume you'll write a similar work detailing the excesses of private sector employees? Or is it easier to focus on the public-sector, since they are more publicly accountable, and have already compiled most of the stories for you?

I say this as a public employee myself; and let me just add that the one meeting I am going to this year to present my research, I'm splitting a hotel room with a colleague, and avoiding the meetings recommended hotels, since we could find a much cheaper deal that involved a bit of walking. This is terribly boring and makes for bad reading, but it is also the norm.

A private sector employee is only accountable to the company's shareholders and (maybe) customers. The code of ethics they follow is defined by either regulation (in which case they're probably engaging in criminal, not just unethical, activity) or their corporation, who puts such rules in place to protect the company's reputation. If that reputation becomes tarnished I, as a consumer, can "punish" that company by not doing business with them anymore. If it's a public employee, I don't really have a choice unless I want to renounce my citizenship and move.

Point being, when it's my consumer dollars at stake, there is no "public accountability". When it's my tax dollars, it's a different story.

If it's "sitting there online for anyone to read", then it *is* "actually published". "Published" means "made available to the public", even if there was no traditional publishing company involved.

Is there some reason that the mp3 cannot be downloaded from this page? iTunes is a terrible way to manage podcasts and I refuse to use it, even if it means no more Freakonomics.

@Rick For this podcast at least (I haven't checked the earlier ones), you can go to the wnyc page and download it (click on the wnyc logo beneath the streaming bar). It'll be an mp3 file and you should be able to listen to it on whatever portable audio device you have (presumably not an ipod or iphone?). Hope that helps

Hi Rick, you can download the podcast here: http://www.wnyc.org/articles/freakonomics-podcast/2013/jul/18/government-employees-gone-wild/

As an ethics expert and lawyer, my only thought is "how did I not know about this book?" It will be my top priority to find this book and use it in my own training programs! Great story, freakonomics guys!

Those are entertaining stories (and I am sure there are similar stories in the private sector), but frankly they are small fries when it comes to governmental ethical failings.

Small correction, I looked at FDA impact in more details. Mary Ruwart estimate about 4 millions lives lost due to delays introduced in the 60s, compared to about 7000 lives possibly saved.
The estimates have some error margin but err on the safe side. The point is how significant the net harm is (two orders of magnitude more than I said in my comment above).

I've known about this document for years. As a Federal employee working budget and involved in procurement, i find it valuable in maintaining my moral compass. It should be mandatory reading for every Federal emplyoyee.

I have to wonder about some of these. As for instance why is it unethical to take side business calls at work, but (apparently) perfectly ethical for your employer to call you about work stuff at home?

Or why it's ethical for someone who practices an accepted religion to get to take time off for it, while we non-religious (or non-mainstream) folks don't get equivalent time. I wonder, though: if I become a practicing pagan, would taking time off for a walk in the woods be acceptable religious practice?

I am a federal employee and an orthodox jew. I take time off for religiously mandated holidays, but it gets filed under religious comp time, which I have to make up and it has to be done in a certain amount of time. I work almost every Sunday morning of the year to make up for the time I take for religious holidays. Around here noone questions the religious reason so yeah, you could take time off for a religiously mandated walk in the park, but you'd have to make it up during off-hours. The flexibility is a nice perq, but it's not time off.

CNBC's American Greed featured a great story about two sisters that ran a small hardware store ( either DC or S. Carolina). They had a tiny military contact where the government would order four hammers, or five washers. It only existed bc it kinda "spread the wealth," and helped come election time.

They sisters accidentally put the invoice number into the shipping cost line. To their surprise, they received a check for something like $3,000 on a $48 order. Apparently, orders were all processed by a computer that only monitored product prices, but never shipping costs. In fact, shipping was paid out of an entirely different pool of money.

The sisters gave the money back, but the person in charge acted like they didn't care to get the money back....so a few months latter, the "accidentally" did it again. This time they waited months to see if anyone would call them out on it. When no one did, they did it again, and again, and again. In six years they charged over $6 million in fake shipping charges, the worst being $900k for two 19 cent wing nuts.

They only got caught bc they pressed enter twice and submitted two of the same invoice. An actual human looked at it and figured out the scam.

What this all comes down to is inherent ethics.

We can architect the most elaborate checks and balances system, but if people are compromised within they'll find a way around that. But today, oversight has been mostly dispensed with. This makes it even easier to leech from the system or take advantage of illegitimate opportunities. On top of all this, the media coverage continually dredges up examples of people who have cheated and been caught after a careless mistake. What that ultimately does is embolden others who feel that THEY won't make such mistakes and get caught. Lastly, the punishments are usually much less severe than anticipated.

We raise children in schools where ethics is not taught; only memorization and test prep. They are also raised by parents who barely have time to focus on the most basic of things, like providing for their children and finding ways to appease them. Instilling discipline and morals is not even given much thought on average. What this ultimately does is create more children with poor ethical values.

Think about it. If you couldn't help but feel seriously guilty for doing something wrong like stealing money from the government or businesses, wouldn't you stop yourself? But with the mentality of being attracted to "something for nothing" when it seems like the odds of getting caught are slim, more often than not people will exploit it. THAT is the society we are fostering.

For those who don't want to download the MSWord Doc, I've posted an on-line version of the Encyclopedia of Ethical Failure at:
http://www.hughes-sf.com/ethical_failure.html