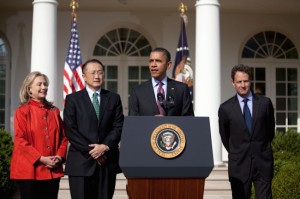 Since its inception in 1944, the World Bank, a multilateral organization charged with financing the development of poor nations, has been led by macroeconomists, bankers, and government insiders. The White House’s 2012 nomination of President Jim Yong Kim — a physician, anthropologist, and academic who used to advocate dismantling the Bank — broke the mold. He is the focus of our latest Freakonomics Radio podcast, “Hacking the World Bank.” (You can subscribe to the podcast at iTunes or elsewhere, get the RSS feed, or listen via the media player above. You can also read the transcript, which includes credits for the music you’ll hear in the episode.)

In less than three years, Kim has overhauled the Bank and laid out ambitious goals — including a 2030 deadline to rescue the more than 1 billion people who live in extreme poverty. Kim is also — along with the Bank’s chief economist Kaushik Basu — eager to apply the insights of behavioral economics to development policy. That is the focus of Kim’s conversation today with Stephen Dubner.

Every year, the Bank releases a World Development Report that’s meant to communicate its policy objectives to the development community. This year’s report, “Mind, Society, and Behavior,” is focused on the success of behavioral interventions that have helped boost savings rates, reduce water consumption, improve education, and eliminate biases among development professionals themselves. The report distills years’ worth of academic research into a little more than 200 pages. In his foreword, Kim boils down the Bank’s message: “[W]hen it comes to understanding and changing human behavior, we can do better.”

KIM: And we started talking about some of the work that I had become fascinated with when I was at Dartmouth, about things like willpower and grit and how they had an impact on success in life and development. And so, you know, he suggested one day that we just take this on. … It was a recognition that we really needed a rethink of where we were going with development strategy. And we also wanted to bring into the discourse of the World Bank Group these thinkers who’ve been so influential in academia but had been much less influential inside the World Bank.

While the report represents a step forward for the development community, Kim acknowledges that the private sector has been much quicker to adapt to behavioral insights. Why has the public sector been so slow by comparison?

KIM: Well, I think market forces are critical here. And sometimes people say, “Well, you know, the private sector does everything better.” And I don’t know that that’s really the case so much as the private-sector entities that did it poorly no longer exist, right? Because they go out of business. And public-sector entities can stay in business for a very long time no matter how poor their performance is.

You’ll also learn a good bit about Dr. Kim himself during the podcast — including how he used President Obama’s mother’s doctoral thesis

to explain to the President why he was the right man for the job. Kim also answers an express version of our Freak-Quently Asked Questions, previously answered by London mayor Boris Johnson and Wired co-founder Kevin Kelly. You’ll see that Kim, who rapped at a Dartmouth talent show and quarterbacked his high-school football team in Iowa, is a pretty interesting guy.

I suspect that Dr. Kim looks good from a distance. The World Development Report on behavior certainly has a lot of insight, it is not clear that it will have any impact on how the Bank works or approaches development. There have been WDRs for years and some have been influential and some have not.

Dr. Kim's approach to development is pretty conventional. WE have something that THEY need and the job of the Bank is to transfer that something. The reorganization was all about reorganizing how knowledge is distributed not some attempt to change incentives or behavior. And, alas, the reorganization was not well thought out or executed.

Come back in a year and see if human behavior is more intergrated in the Bank! In the meantime, you might want to talk to some free thinkers in development, like (for example) Lant Pritchett, William Easterly, or Ravi Kanbur. Or why don't you take apart some of the stories in the WDR and see if people still shout at bad drivers or if the water rationing happened as told.

The World Bank's reorganization is about bringing knowlege to the forefront; it is a replica of how my prior private employers were organized to deliver fee-based professional services -- the only thing missing is the "guillotine sharpens the mind" invisible hand -- you are financially dead if your paying customers walk (but at the Bank's poverty arm, 20 nations pay, and another 100+ nations receive).
And about those free thinkers . . . they wouldn't have an audience at the World Bank except as a "drive-by" to be comprehensive. Now maybe, after a year, when their Staff gets back to business rather than reverse-engineering cost secret reduction reports, they may now be free to look for alternative solutions toward the 2030 goal which is either aspirational or a performance rated objection.

Does Dr. Kim have a reference source for that Colombia water saving campaign? I want to learn more about it but can't find anything online!

Found it! Here's the report in case anyone else is interested:
http://www.worldbank.org/content/dam/Worldbank/Publications/WDR/WDR%202015/Spotlight-5.pdf

Not sure why Dubner was so enamored with Kim. He seemed like a typical, all be it smart, bureaucrat. This is the first time I had to check how much time was left in the episode. I usually love the show – and everyone is entitled to mistakes – but get back to interesting content!

I agree. This episode was a long boring puff piece.

I really enjoyed this episode. Did anyone else recognize Rory Sutherland's voice in the preview for the next installment?

Wait... so the "skin cream and the minimum wage" experiment showed what about the effects of the minimum wage? It sounded like he was saying that a minimum wage was not helpful, but people think that it is because they have preconceived notions and mental models that favor it...

Freakonomics should have dug deeper into Jim Kim's Dartmouth record... A little hint: He does not receive such a warm welcome in Hanover.

As somebody who has had the misfortune to work for Mr. Kim for three years, I guess it is easy to be underwhelmed.

Kim is far better at communicating with the media and donors than with the staff and he is certainly a better communicator than an administrator.

He certainly had nothing to do with the planning or preparing the 2015 WDR. This annual publication was put in the pipeline around the same time that he started as President.

I think it is an open question if the WDR will make any change is how the WB behaves. My guess is that it will not...the institution is quite inflexible. I do not think that Mr. Kim has the capacity to real change how the Bank's culture or how it works. I suspect he is primarily looking for his next job.

Kim promotes; " a 2030 deadline to rescue the more than 1 billion people who live in extreme poverty."

I'll give him credit - by saying 1 billion people will be rescued, he trumps previous politicians or visionaries who may have claimed to be rescuing a measly 1 million or 10 million. In the Liar's Poker game of running the world with other people's money, Kim will be hard to beat.

I would ask Freakonomics to start keeping a record of all such predictions and initiatives. So that those of us still around in 2030 can see how well (or badly) Kim did.

I thought this was a fascinating piece (as are all freakonomics podcasts). Possibly for those who know him and his work, this piece showed him in too positive a light, but for those unfamiliar with him I left impressed. Implementing behavioral economics thinking into large organizations can be hard and his vision for it truly fascinating. It's possible his implementation of it lacks something...
Good podcast!

The only problem is that he is not introducing behavior economics. The study was commissioned before he came (every year the Bank does a major study) and he probably did not know about it in any details until a few months. He is definitely not trying to shake up the organization as the podcast suggest. He is just at promoting himself.

Since 2004 an estimated 3,350,449 people were forced from their homes, deprived of their land or had their livelihoods damaged because they lived in the path of a World Bank project